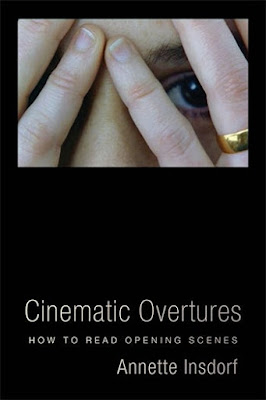 One of the most distinctive film openings in the history of American movies is that of Woody Allen's Annie Hall (1977).  Released towards the end of the American New Wave period, it violates so many traditional cinematic norms that it would have been shocking and, literally, unthinkable to previous generations of film-makers and possibly even film-goers.  Its transgressions are many.  First, Allen looks directly into the camera and addresses us, completely shattering the fourth wall.  He will do this repeatedly in the film.  Second, he is overtly ethnic, in his case, Jewish.  For decades Hollywood hid/hides ethnicity and race, but Allen embraces it.  And one of the major themes of the film is what it means to be Jewish.  Third, he gives away the ending, namely, that he and Annie have broken up.  So this is a boy-gets-girl, boy-loses-girl story.  The old studio heads  - and their successors - wouldn't be fond of that.  And finally, the very look of the shot (Gordon Willis is the cinematographer) sends a message.  Full of tans and browns - even the red in Allen's shirt is muted - it tell us that, yes, this is a comedy, but it's been put together with a level of care and thought normally reserved for important drama.  In other words, the whole movie is right there in its opening scene.  The way a great novelist or composer will take extra effort on the beginning of their works, so too do great film-makers.

And that’s the subject of Annette Insdorf’s intelligent new book Cinematic Overtures: How to Read Opening Scenes.  “Overtures” is the right word.  Just as the overture to a musical or opera sets the tone for the rest of the piece, so, too, does the opening scene of a film.  She doesn’t mention it but some films (Gone With the Wind, Laurence of Arabia, etc.) begin with an actual musical overture playing while a title card “Overture” (how convenient) is shown on screen.  Although that practice has been largely abandoned today, Insdorf notes that some films still use their opening credits sequence to create a literal cinematic overture.  As two powerful examples of this she cites Rosie Perez dancing to Public Enemy’s “Fight the Power” in Spike Lee’s Do the Right Thing, as well as Martin Scorsese’s Raging Bull featuring a robed Robert DeNiro slow-motion shadow-boxing in the ring while the lush “Intermezzo” from Mascagni’s Cavalleria Rusticana plays in the background.  (Is it perhaps relevant that both these directors, as well as Allen, are from New York City?)

Insdorf breaks down opening scenes into various types.  There are “Narrative Within the Frame” - think of the single long-shot opening of Touch of Evil or The Player.  Or the first shot and the entire first scene of The Godfather.  There’s also “Narrative Between Frames” - films such as Spielberg’s Schindler List which use editing or montage to start the story or set a tone.  There are films that establish a single point, usually of the protagonist (The Graduate, Taxi Driver), and others which have a collective protagonist (Magnolia, Day for Night).  Another category is “Voice-Over Narration/Flashback” (Sunset Boulevard, American Beauty).  And probably the most interesting of all: “Misdirection” - films whose beginnings deceive us (The Truman Show, for instance).  These categories are of course fluid.  Insdorf puts Truffaut’s Day for Night in the category of films with a collective protagonist but its long opening shot could easily place it among the “Narrative Within a Frame” group.

But there’s no need to quibble.  Insdorf loves movies, and if her enthusiasm leads her astray from time to time on the cinematic taxonomy, one really doesn’t mind.  This is less a “how to” book and more like listening to a really smart friend go off on the films she loves.  There are insights on practically every page.  For instance, she notes that Werner Herzog’s Aguirre, the Wrath of God is a journey from verticality to circularity (a.k.a. pointlessness).  The film opens with a dizzying shot of Spanish conquistadors scaling precipitous mountain paths; it ends with a shot of Aguirre on his raft - insane, doomed, and alone except for dozens of monkeys - while the camera circles him repeatedly (both scenes are below).  She goes on to observe that Francis Ford Coppola’s Apocalypse, Now (which resembles Aguirre in many ways) borrows that circularity by having a song named “The End” start the film.  Beginnings, endings - what’s the difference? the film-makers seem to be saying; the imperial adventure always winds up in failure and futility.

Lina Wertmüller’s Seven Beauties from 1975 (another film Insdorf examines) is not only still a criminally under-appreciated film but it also has one of the most unique openings you’ll ever see.  It’s made up entirely of documentary footage of World War II - Hitler and Mussolini shaking hands, buildings exploding, bombs falling from planes - while a voice recites a poem punctuated with the phrase “Oh, yeah.”  In the background a cheesy jazz score plays a popular Italian song.  The poem was written by Enzo Janacci, a singer-songwriter, stand-up comedian, and cardiologist.  This opening scene perfectly encapsulates the irony, anger, and irreverence with which Wertmüller will treat her subject.  It also captures the insanity of World War II.  This is the kind of film opening you would expect from Joseph Heller, Kurt Vonnegut, or Günter Grass if they were accomplished film-makers.  Only about four minutes into the film does its protagonist (Giancarlo Giannini) show up - interlaced, at first in black and white, with the documentary footage until his presence takes over and the story begins - and the film transitions to color, too.

Insdorf’s tastes are eclectic; she examines Hollywood hits and art house rarities.  Smartly, she spends the time explaining the movies most of us haven’t seen so we can follow along with her argument.  Many new titles were added to my Netflix list.  Also, she intentionally ignores films from the silent as well as from the classic Hollywood epoch (mid-1930s to mid-1950s).  Her interest is almost entirely in the period of about 1958 to the present.  Prior to then only a few film-makers (Welles, Ford, Hitchcock) had the latitude to begin their films in unique ways.  She and I have similar tastes.  Citing the widely shared belief that 1939 was “the pinnacle of American film history,” she offers the brave dissent that 1974 was a year of equal significance in Hollywood film.  Her evidence: The Godfather, Part 2, Chinatown, The Conversation, Harry and Tonto, Lenny, Alice Doesn’t Live Here Anymore, A Woman Under the Influence, Thieves Like Us, and Young Frankenstein (among others).  Uncited on her list: The Texas Chainsaw Massacre, The Sugarland Express, Blazing Saddles, Bring Me the Head of Alfredo Garcia, The Towering Inferno, Fritz the Cat, and The Taking of Pelham One, Two, Three.  It was a good year for low-brows, too.

And this brings me to my one complaint with her book.  There aren't many contemporary films which she examines.  Although the book was published in 2017, she seems to be, as am I (and certainly as is this blog post!), a little trapped in the past.  She has interesting observations about films from the 1990s such as The Piano, American Beauty, Fight Club, etc. (though, strangely, she has nothing to say about the incredible opening scene of Scorsese's Goodfellas), but she doesn't comment about many movies from the millennium on.  And that's a shame.  I would love to know what she thinks of the openings scenes of, say, Children of Men, or Birdman, or any of the works of Wes Anderson or Paul Thomas Anderson.  Still, this is a minor complaint.  Cinematic Overtures is a thoughtful and outstanding book.  And here's a video - from the now sadly defunct FilmStruck - in which she discusses it.

Posted by Andy Nicastro at 6:22 AM