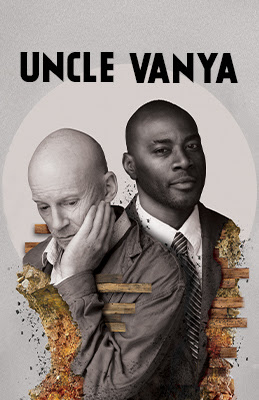 On Friday night I went to see Anton Chekhov’s Uncle Vanya at ACT in downtown Seattle.  What a magnificent production.  Director Jahn Langs and the cast and crew have given this play a vitality and emotional power you don’t often see on the Seattle stage.  Rarer still, this is an intelligent production, and the few liberties Langs has taken with the work add depth and dimension to Chekhov’s vision.

A few minutes into any Chekhov play and you realize that he is our contemporary.  His characters are the people we know in our own lives; what goes through their minds goes through ours as well.  Vanya, for instance, is a 47-year-old man living on a provincial estate.  He is very angry and disappointed with his life.  Most of it has been wasted and he knows it.  For years he idolized his sister’s husband, Serebryakov, a pompous professor.  He worked for Serebryakov, helped translate his works, committed whole passages of his essays to memory.  He believed in him.  But time has passed.  The sister has died, and Serebryakov remarried.  When the play opens the professor and his new young and beautiful wife, Yelena, have moved into the estate with Vanya.  Up close, Vanya can now see that Serebryakov is a talentless hack, a man twenty years behind the times, an idiot, a fool.  And the man for whom he has sacrificed his own life and any talent he may have had.  He seethes with regret, resentment, and depression.  And it doesn’t help matters that he’s also fallen madly in love with Yelena.  I think I know this guy.  Really, I do.  And if you’re honest with yourself you may be a little like him too.

The other characters are also like the people who surround us.  There’s Astrov, a local doctor and friend of Vanya’s, who has a passion for saving the province’s dwindling forests.  Yet aside from his and Vanya’s long bull sessions he doesn’t ever actually do anything to preserve them.  Even as a doctor he performs his duties with great reluctance whenever someone in the village gets sick.  We like Astrov, but he’s all talk and no action.  And he, too, is madly in love with Yelena.

And what of the lovely and beloved Yelena?  She’s unbearably unhappy.  She hates the provincial life, and whatever love she felt for her sick, elderly husband has long since evaporated.  Vanya amuses her - why wouldn't he, they’re both “victims” of the professor’s insidious mediocrity - but when Vanya confesses his love to her she groans with irritation.  Instead, she loves Astrov.  Yet we sense that even there it is a love born of boredom and discontent rather than any genuine affection for the man.  Her one desire by play’s end is simply to leave - and to leave immediately.  She has, as many of us do, the mistaken belief that geography is psychology, that we’ll be happy somewhere else, we just need to leave here first.

And then there’s Sonya, the professor’s daughter via his first wife.  In many ways it’s her play.  Vanya is, after all, her uncle.  She is shy, hard-working, a little nervous, and, most importantly, plain-looking.  She, unlike Yelena, genuinely loves Dr. Astrov but he doesn’t love her at all.  She cannot compete with Yelena’s beauty and charm.  If Uncle Vanya is a play about wasted potential her situation is the most moving and heart-felt.  She doesn’t have much talent, and the talents of the other characters are fundamentally narcissistic and selfish.  But Sonya’s one potential - and it’s a universal one - it to love someone else completely and selflessly.  And that, too, is frustrated.

The cast in this production is fantastic.  There’s not a weak performance in the whole ensemble.  In the minor roles, Amy Fleetwood was very good as Maria, Vanya’s mother.  Sharva Maynard made a warm and outstanding Nanny; when the elderly Serebrayakov throws a fit, she effortlessly leads him offstage, recognizing that he’s just a big baby underneath all those years.  In the role of Telegin (a.k.a “Waffles”), a local deputy and hanger-on at the estate, Rob Burgess brought not only an easy and irresistible appeal to the role but also a fully-rounded humanity.  As events go from bad to worse, an agitated Waffles tries to interject himself into the situation only to be shoved aside, at times literally, by the leads.  Burgess makes us wince for the character every time this happens.  And Kevin Lin in the most minor role of them all - “Yefim, a workman” - does a good, solid job at it, especially in the second act where he is called upon to drunkenly sing and carouse with Astrov and Waffles.  He is a wonderful boon companion.

Peter Crook is an excellent Vanya, full of complaint and whining.  His Vanya is likable and entertaining but seems so small, and never more so than when on one of his self-pity jags.  His clothes are shabby and unkempt.  At one point he puts a tie on but it makes him look worse, like a Russian Willy Loman.  When he brings Yelena flowers, one simply cringes for him.  Langs treats Vanya in a very unique way in this production - specifically, Vanya doesn't leave the stage during the acts.  All the other characters come and go, but not him.  Every time he "exits" the lights change and Vanya merely stays in the darkened areas of the stage, watching the other characters interact.  It adds a haunting quality to the production, as if all these events were memories conjured up by Vanya at a later time.  Also, when left alone on stage some of the other characters will deliver mini-soliloquies about their feelings.  In this production, though, when left "alone" the lights shift again and the characters tend to address their feeling to the silent Vanya.  I found it very powerful.  It was as if Vanya could understand their thoughts even though he wasn't present.  At one point Vanya complains that he could have been another Dostoyevsky.  We seriously doubt that during most of the play, but during these spectral moments of Vanya's we wonder if in fact it shows that he does have the sensitivity to understand the people around him, that he really does have the great soul he imagines that he has.

If, like me, you've always found Astrov a drab character - a bit of a bore actually - Sylvester Foday Kamara's performance will turn your opinion around.  His Astrov is full of charm and appeal; he's forthright and direct, a man's man.  You understand why all the women have a thing for him.  And you understand why all the men have a thing for Yelena the moment Alexandra Tavares walks onstage.  She's beautiful, lithe, confident -  with just enough aloofness to make her irresistible.  Tavares also endows Yelena with a lively intelligence.  She bitches about things with Vanya and eagerly listens to Astrov talk about the forests.  She doesn't wrap the men in this play around her finger, instead they leap on her fingers and happily form rings around them on their own.  For a play by Chekhov this production is not afraid to throw in a sexual charge.  At one point in the first act, for instance, Yelena leans back on a swing and the moment was electric; she looked like some Gil Elvgren pin-up magically come to life.  Later in the play when Astrov and Yelena kiss it is a hot and passionate embrace, not some restrained nineteenth-century affair.

Mark Jenkins's Serebryakov is all fool.  One despises him from the start.  He was great.  This is the kind of depiction Vanya would like to see (maybe that's why he's loitering on the stage).  Jenkin's is a wonderful comic performer.  When saying goodbye to the other characters at the end of the play his verbal inarticulateness brought down the house with laughter.  Sunam Ellis is a touching Sonya.  We sympathize with her but we never pity her.  There's a toughness underneath all her nervous energy.  The end of Uncle Vanya belongs to Sonya.  Her speech to her uncle is one of the most powerful and moving moments in the history of theater and Langs has chosen to treat along the lines of the many soliloquies we've already seen.  Only this time Sonya delivers it to us, the audience.  It was a bold move and Ellis pulled it off beautifully.

Kudos also need to go out to Robert Aguilar's lighting design and Robertson Witmer's music and sound design.  They both deepened and enriched the production in striking ways.  One example - in the third act Astrov shows Yelena maps he's made of the region which document the increasing deforestation.  As he goes on painting a dire picture we start to hear - softly, in background - the chirping of birds.

This production is a collaboration between ACTLab and The Seagull Project.  The latter is an endeavor started many years ago to perform the complete cycle of Chekhov's four major plays.  With this magnificent production, that project is now complete.  So let me get on my soap box for a moment and advocate for a new Herculean project for these highly talented people to take on - namely, the full cycle of Henrik Ibsen's major plays.  They've already done the works of one of the founders of modern drama, so why not do another one.  They can call it The Wild Duck Project.

For now, though, we have an unforgettable Uncle Vanya to enjoy (that is, until February 17th).  It's true that it’s all a big, heaping dose of The Human Condition.  But what keeps it afloat is Chekhov’s ability to depict it all with compassion, humor, and a seemingly bottomless sympathy.  You don’t leave the theater depressed after seeing Uncle Vanya (especially in this production), you leave feeling exhilaration.   Like the works of Sophocles, Shakespeare, O’Neill, and others, Chekhov’s works make us confront our lives and experiences with an honesty which may be bracing and even disturbing at times but is ultimately uplifting.  In great drama we transcend our suffering through the telling of it.

Posted by Andy Nicastro at 6:45 AM