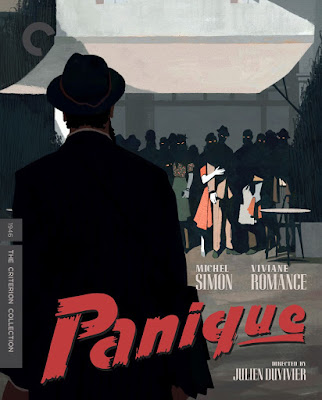 I saw the movie Panique this weekend.  It's an exceptionally good and powerful depiction of evil and mob violence.  Originally released in 1946, this was the first film which director Julien Duvivier made on his return to France after the end of World War II.  Few filmmakers were as good at creating lush and arresting images as Duvivier was, and Panique doesn’t disappoint in this regard.  This DVD is a recent release from The Criterion Collection so the visual quality was of the highest.  Although this film was a commercial and critical failure when it first came out, it’s been rediscovered and is now rightly regarded as one of Duvivier’s best films, if not his masterpiece.

The story concerns Monsieur Hire (played by Michel Simon), a reclusive and stand-offish single man living in a town outside of Paris.  One day a murdered woman’s corpse is discovered in an abandoned lot.  Soon the police are on the trail but they hit a dead end.  We film viewers, though, have learned that the killer is Alfred (Paul Bernard), one of the town’s slicker and more wily inhabitants.  We discover this one night when he admits to the murder to his girlfriend, Alice (the lovely and aptly named Viviane Romance).  This confession doesn’t disturb Alice at all.  She loves Alfred madly, and her biggest concern is making sure that he doesn’t get caught.  At the same time who else lays eyes on the lovely Alice but Monsieur Hire, and he immediately falls head over heels for her.  She doesn’t care for him in the least, but soon she and Alfred realize that they can pin the murder on the gullible Mr. Hire.  Alice needs only to convince the lonely fellow that she loves him in return so he’ll let his guard down.  And he does - to his doom. 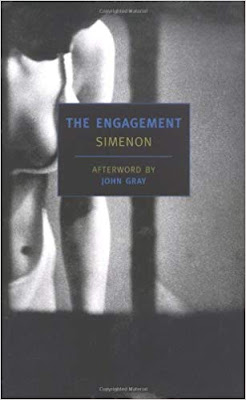 This film is based on a 1933 novel Les fiançailles de M Hire by Georges Simenon (published in English by New York Review of Books Classics as The Engagement), and if you’ve read the novel you’re in for a surprise.  The film’s credits say that it was “inspired” by Simenon’s novel and that’s a better word than “adapted.”  Duvivier and co-screenwriter Charles Spaak have kept the plot of the original but almost entirely changed the character of M. Hire.  In Simenon, Hire is a fat, seedy, ex-con who earns a living by running mail order schemes.  He’s a low-level slime ball, a nobody, the kind of guy for whom becoming Dostoyevsky’s “Underground Man” would be a major step up in life.  But in Duvivier and Spaak’s version Hire is a clean cut, up-standing citizen; there’s nothing sleazy about him.  He earns his living as a professional astrologer.  He has a mansion in the countryside and earlier in his life he practiced law and was even a judge.

The two men do, though, share some characteristics.  Both are outsiders.  Both are voyeurs, Peeping Toms.  Duvivier’s Hire stands at his apartment window and stares into Alice’s hotel room while she undresses.  And both men are Jewish, although each version handles that very differently.  In Simenon’s novel, it’s overt.  Once folks in the neighborhood wrongly believe Monsieur Hire is the killer, their anti-semitism comes out.  Part of the shock of reading the novel is Simenon’s unflinching depiction of the ugliness of anti-semitism.  In the film, though, M. Hire’s Jewishness is only alluded to.  It’s never stated directly.  Panique is one of those films made in that era which wants to address issues of anti-semitism but is squeamish about referring to Jews.  (Gentlemen’s Agreement from 1947 had a similar annoying and cowardly evasiveness.)

Panique, like Fritz Lang’s Fury (1936), powerfully captures the evil of mob violence.  This film is an indictment of the French people for their spontaneous murder of Jews before and during the war, as well as for their extra-legal killings of suspected collaborators after it.  No wonder this film bombed when it was first released.  No one in France wanted to hear this in 1946.  To be fair, Duvivier had spent the entire war safe in Hollywood; the people who had endured the Nazi occupation were in no mood to receive moral lectures from him.  Fortunately, seventy years later, we don’t carry that baggage.

The acting in this film is very good.  The ursine Michel Simon puts in an excellent performance as Monsieur Hire.  Although quiet and subdued Hire is always different, he always sticks out, he’s eccentric.  With his soft lips and beard Simon depicts Hire as a gentle, almost scholarly soul, yet with a deep reservoir of misanthropy.  But sadly, not of suspicion.  Hire’s cynicism is that of a disillusioned idealist - as was Duvivier’s, by the way.  Given a chance to believe in others, Hire does so fatally.  And speaking of fatal, is there a femme more fatale than Viviane Romance’s Alice?  Like a good film noir heroine, she is rotten to the core.  As she pretends to love Hire we keep hoping that at some level she'll respond to his adoration, but she doesn’t.  It’s all an act.  She’s toying with him to destroy him.  She’s not just a cat playing with a mouse, she’s a cat convincing the needy little mouse to come closer because she loves him.  It’s much more evil.  Toward the end of the film, Duvivier tries to imply that she has some remorse for her actions, but I didn’t believe it.  Not for a second.

As usual The Criterion Collection has included many wonderful extras with this DVD.  Film scholars James Quandt and Lenny Borger have each contributed an essay.  Then there’s a  short documentary by Bruce Goldstein called The Art of Subtitles.  And there's a fascinating interview with Georges Simenon’s son, Pierre.  But the best is a discussion of this film and its place in Duvivier’s career by French film critics Eric Libiot and Guillemette Odicino.  They are a winsome pair.  Watching them you understand why if Paris is not the center of film-making it's most definitely the center of film appreciation.

After viewing the DVD supplements, one of the things that comes through about Panique is its possibly close relation to Alfred Hitchcock and his movies.  Although it’s not known if Hitchcock ever saw Panique, Libiot notices a lot of connections between it and Hitchock’s later works.  For instance, Monsieur Hire’s voyeurism is echoed by Jimmy Stewart’s in Rear Window (1954).  There’s a carnival in town in Panique (it’s not there in Simenon, though), and at the end we see people madly leaving the rides to join the crowd which will attack Monsieur Hire.  The climax of Strangers on a Train (1951) will similarly involve a carnival and its rides.  Finally - and most convincingly - the rooftop chase scene in Vertigo (1961) is very similar to the ending in Panique.  Fleeing the angry mob, Monsieur Hire winds up on the rooftop of a building with police in pursuit.  Like Jimmy Stewart in Vertigo, he slips on the tiles and finds himself hanging onto a weak drain pipe for life.  Unlike Stewart, though, he doesn't make it.  The similarities are intriguing.  “And Uncle Alfred was no great fan of humanity either,” Odicino insouciantly throws in.

Hitchcock also shows up in Pierre Simenon’s interview too.  Georges Simenon was  a famously productive writer, capable of cranking out a whole novel within six or seven days.  Ultimately he churned out over 300 titles.  According to Pierre, one day the phone rang and it was Alfred Hitchcock on the line.  He wanted to talk to Simenon.  “I’m so sorry, Mr. Hitchcock,” Simenon’s secretary said, “he just started writing a novel.”  “No problem,” Hitch responded, “I’ll wait.”

Posted by Andy Nicastro at 2:26 PM