When I was a little kid and first saw Ingrid Bergman (in Casablanca, of course), my immediate reaction was “Oh my God!  This is the most beautiful woman who has ever lived!  I want to look at her forever!”  Clearly, I was not alone in my response.  Someone else must have felt the same way I did, and I think they wound up working at The Criterion Collection - who have served the Swedish-born actress very well over the years.  Their latest selection of her works is a set of six films which she made in her home country early in her career.  I reviewed the first two films here; below are reviews of the middle two; and the last two here. 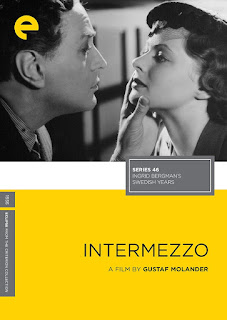 Intermezzo (1936)
Holger Brandt (Gösta Ekman) is a successful violinist with a wife and family.  One day he encounters a beautiful and talented young pianist, Anita Hoffman (Ingrid Bergman).  They fall in love and soon he leaves his family for her.  But the May-September romance doesn’t last.  Ultimately, Anita leaves Holger so she can continue her studies in Paris.  A heart-broken Holger returns to his estranged family.

A magnificent film, a masterpiece.  Director Gustaf Molander has taken the most banal of topics - adultery - and turned it into a compelling and unforgettable drama.  Intermezzo was Bergman’s break-out movie.  It made her a star in Sweden and would ultimately lead her to Hollywood.  Her performance in this film is outstanding.  In previous outings she had a tendency to overplay her roles, to put all the character’s emotions fully on display.  But with Intermezzo she learns restraint; the histrionics are eliminated, the emotions are internalized and we get a portrayal of subtlety and depth.  Bergman always credited Molander with being one of the directors who helped her grow as an actress (the other was Hitchcock).  “I created Intermezzo for her,” Molander once said, and that’s evident every time she’s on screen.  He loves her.  She’s radiant in every close up.  At this point, special mention needs to be made of the work of cinematographer Äke Dahlqvist.  This is one of the most gorgeous and lush films you will ever see.  Even the non-Ingrid-Bergman shots are suffused with beauty and a luminous glow.  The camera itself seems to be intoxicated with love.  Molander, Bergman, and Dahlqvist would work together on several films during the 1930s - three of their ventures are included in this set - and these works are largely considered to be the best works of Swedish cinema in the 30s.

Gösta Ekman is equally good as Holger.  The chemistry between him and Bergman is what holds this film together.  He has a remarkable and compelling face.   It’s aristocratic, with just a hint of dissipation - perfect for the role of a violinist.  Ekman’s career went back to the silent era and despite the overall mastery which he displays in this outing from time to time he has a tendency to overact the way those silent-film actors often would.  Yet in a strange way this too helps the film.  It echoes the story; the May-September love affair is reflected in the different acting techniques of the leads: hers newer, quieter, and more naturalistic; his older and slightly more exaggerated.

This film also helped to establish Bergman’s screen persona, which was an intriguing one and would persist even through her years in the US.  She often played women who, by Hollywood standards, were a little sexually loose - think of Ilsa from Casablanca or Alicia from Notorious.  Yet she was never a “bad girl,” never a Gloria Grahame or Jean Harlow.  And her “loose” characters were often distinctly nurturing, even maternal, at the same time.  For instance, in Intermezzo she first meets Holger while teaching his daughter piano.  The little girl loves her, of course.  This ability to straddle female stereotypes in American films was no doubt due to the fact that she was a foreigner.  As a European - and a Swede, no less - she had a leeway denied her US-born colleagues. 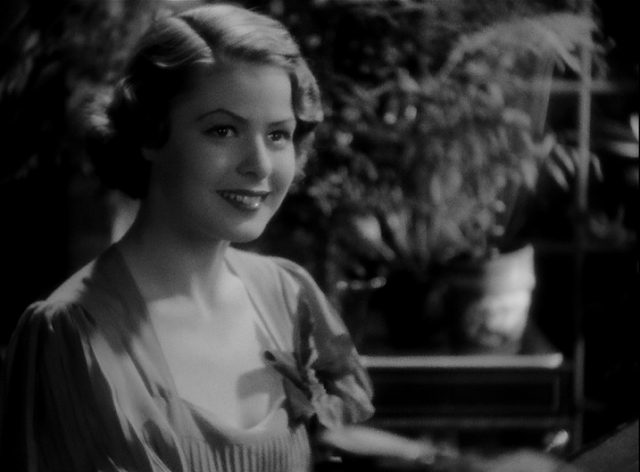 When David Selznick saw Intermezzo, he was so struck by Bergman’s beauty and performance that he brought her out to Hollywood and remade it under the same name in 1939 with Leslie Howard.  The film was a hit and made Bergman a star in the US and abroad.  Intermezzo is iconic for Bergman in another sense.  Her last theatrically-released movie was the beautiful Autumn Sonata (1978), which was written and directed by Ingmar Bergman.  In it, she plays a world-famous classical pianist who returns home to mend fences with her estranged daughter (played by Liv Ullman).  Ingmar had often expressed a desire to work with Ingrid and it's no accident that the role he created for her hearkened back to Intermezzo.  Autumn Sonata, by the way, was also Ingmar Bergman's last theatrically-released film, too.  Henceforth, both Bergmans worked only in television for the rest of their careers. 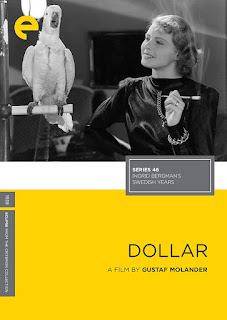 Dollar (1938)
This attempt at a screwball comedy, á la Lubitsch or Cukor, completely falls flat.  Three wealthy couples gather at a ski resort (Ingrid is one of the sextet).  They flirt with each other and fight with each other, say witty things and dress elegantly, etc.  Then a rich and young American woman shows up.  She is eccentric, so there are more witticisms and quips and cleverness.  In the end, all strife is resolved, husbands and wives are reunited and the American lady has got herself a  husband.

Clearly this is all meant to be light-hearted, charming, and effervescent in a Noël Coward sort of way.  But it’s not.  At least, not to me.  I admit this may just be an issue of cultural differences, which are never more noticeable than in comedy.  Swedes and screwball comedy simply do not go together.  The former lack the lightness of touch to pull off the latter.  They are too serious, too earnest, too honest about life.  They just don’t get the finer points of screwball comedy, and, of course, if you don’t get the finer points, you don’t get it at all.  They also don’t know what to exclude.  For instance, one of the woman in Dollar is exceptionally emotional and we learn that this is because she still hasn’t gotten over the death of her child a few years back.  Oh, boy.  A dead child.  No, no, no.  Listen, Swedes, rule one for comedy, and especially light comedy: No dead children.  Ever.  Not in the story, not in the backstory.  Dead children in drama - yes.  Dead children in comedy - no.  That should be obvious.  Sheesh… 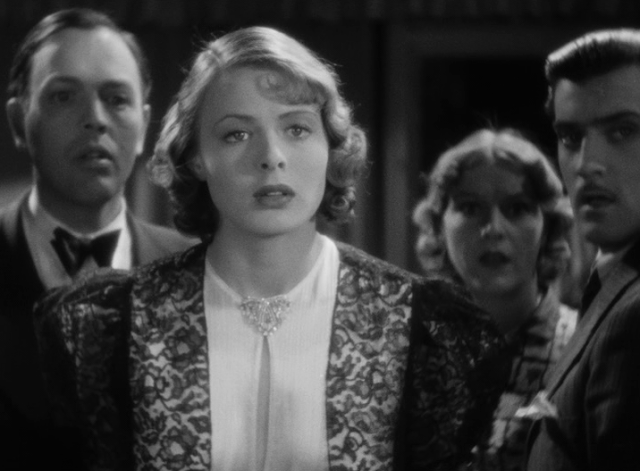 Despite the poor script and overall doomed nature of this endeavor, Bergman puts in a solid performance.  She is catty and quick-witted as the wife of an industrial tycoon who loves his business more than he loves her.  She delivers the swift comedy-of-manners patter with aplomb and is as slinky, feline, and elegant as one would wish.  Gustaf Molander directed and Äke Dahlqvist shot it, so it is a delight to watch despite its flaws.  Ingmar Bergman was a big fan of this film.  Back in 2000, he wrote about Dollar and praised its “poise and perfectionism.”  I didn’t see much perfectionism in it but it does have poise.

Posted by Andy Nicastro at 7:03 AM