Here they are - the last two films in The Criterion Collection’s six-movie set of Ingrid Bergman’s early work in Sweden.  (See reviews of the first two here; of the middle two here.)  The mood is now darker.  In a 1937 poll of Swedish film-goers Bergman had been voted “most admired movie star.”  So she did what most intelligent movie stars do - she took risks. 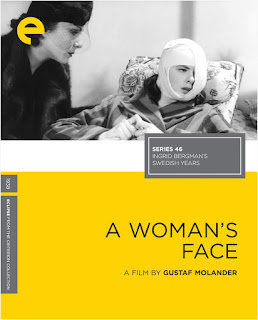 A Woman’s Face (1938)
How do you make a beautiful face more interesting on camera?  Make it ugly, hide the beauty.  And so it is in this film.  Bergman plays Anna, a con-artist with a face partially disfigured by fire in her childhood.  While collecting blackmail money from a wealthy woman, Anna is caught by her mark’s husband, who, with great cinematic convenience, just happens to be a plastic surgeon.  The kindly and sympathetic doctor gives her a new face - and the chance at a new life.  But things aren’t so simple.  Her gang sends the now beautiful Anna undercover as a nanny to a rich old man in a scheme involving murder.

This film is very good; it’s somber and thought-provoking, but never bleak or grim. Bergman fought to make it, writing in her diary that it was “my own.”  At the same time, she was concerned that audiences might not wish to see her disfigured.  And for 1938 it’s an impressive disfigurement, created using makeup, glue (to distort her eye), and a dental brace.  Bergman’s performance is gripping.  Although she’s not entirely convincing as a criminal (there’s no dead soul behind those eyes), she beautifully captures the burden of anger and pain that can come from a life of poverty and physical stigma.  When she infiltrates the house of the wealthy old man in the second half of the film, we can see her mounting anger at the comfort and ease in which he and his grandson live.  Bergman’s Anna is a portrait of deep envy.  She doesn’t just envy other people’s stuff; she envies their pasts, the happiness and freedom that their lives represent and that her life has lacked due to her deformity. 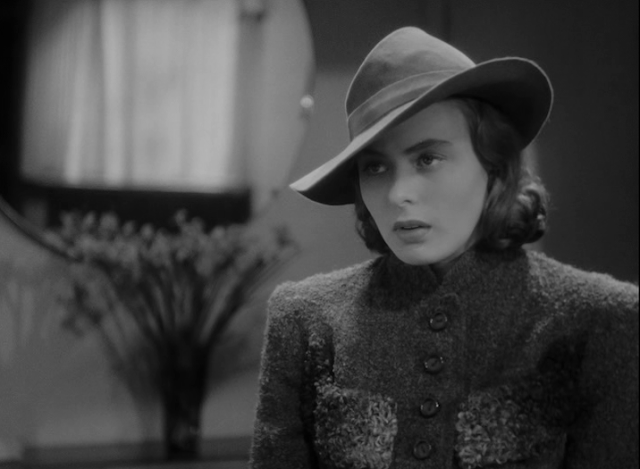 Gustaf Molander does an outstanding job directing.  He holds back at giving us a clear view of Bergman’s face, both in the beginning when she is disfigured and later when her face is restored.  Much of the power of this film is based on how Molander plays with the movie-going experience itself.  We go to the movies to see faces.  Yes, there’s story, action, emotions, etc. but the face is at the center of it all, remove the face and there’s no movie.  By temporarily withholding our view of Bergman’s face, Molander creates suspense, tension.  But suspense for what?  In a story we feel suspense when we want to know the outcome.  What Molander is creating is different.  He’s blocking our view, he’s impeding what John Ruskin called “the desire of my eyes” though, to be frank, what we bring to the movies is stronger that a mere desire - it’s a lust of the eyes.  And that is what Molander frustrates and, hence, incites in this film.  This film was shot, like the previous two, by Äke Dahlqvist so it is breathtaking to watch - the lust of your eyes will most definitely be satisfied.  An exceptionally good film.

Two things before I move on to the last movie.  First, Patricia Hutchinson, a film critic and editor of the website SilentLondon.co.uk, wrote the brief and excellent notes which accompany each film.  I have relied upon her for much of the factual information in these posts.  Second, After seeing these films, I would like to directly appeal to The Criterion Collection to release more films, or even a box set of them, directed by Gustaf Molander.  This was my first exposure to the works of this great director and more would be welcome. 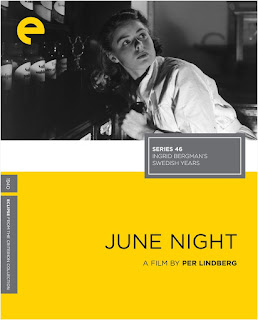 June Night (1940)
Ingrid Bergman plays Kerstin, a young girl in a small Swedish town who is shot in the chest one night by her lover.  She survives, but the publicity from the resulting trial forces her to move to Stockholm.  There she gets a job in a pharmacy and moves in to a boarding house with other young women.  Although she will discover romance, the past, not surprisingly, catches up with her.

Despite the soap-opera nature of the plot, this is an absorbing and lively film.  Once Bergman is in Stockholm the movie transforms into an ensemble piece (but a good one) as we follow the lives of several young professional woman in 1930s Sweden.  Marianne Löfgren as Äsa and Marianne Aminoff as Nikan give wonderful performances as, respectively, a nurse who befriends Kerstin and a switchboard girl who rooms with her.  And Ingrid, in what would be her last Swedish film until 1967, is very good as the troubled and tormented Kerstin.

This film honestly and candidly depicts the sexual politics underlying the lives of women at that time, especially those who worked.  It’s based on a novel by Tora Nordström-Bonnier, whose work specialized in psychology and issues of sex.  Not surprisingly June Night has far more candor and realism than anything Hollywood was creating at the time.  Unmarried couples go off for the weekend, single woman sleep with men and don’t die in car crashes - it’s pretty wild stuff.  Even ordinary events are depicted with a directness unusual for its time.  At one point, for instance, Bergman has to show her chest wound to a doctor so she takes off her top and removes the bandages over her breasts.  We, of course, don’t see them but the doctor does.  He looks at her nude front and probes the wound, all the while making judgmental comments.  We wince at Bergman’s vulnerability and the doctor’s casual cruelty.  A scene such as this would never have survived the censors in the US.  Per Lindberg directed and the film was shot by, who else, Äke Dahlqvist, so it is a visual feast.

Posted by Andy Nicastro at 7:58 AM