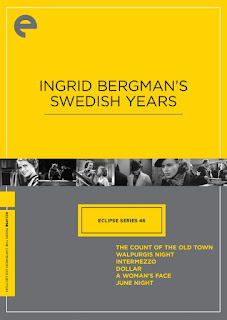 Before coming to the United States in 1939, Swedish actress Ingrid Bergman had a successful career in her home country.  The Criterion Collection has just released six of her early Swedish-language films as part of their no-frills Eclipse series.  Here are reviews of the first two.  For reviews of films three and four, go here; for reviews of films five and six, here.

The Count of the Old Town (1935)
A well-made but unfunny comedy set among low characters in the Old Town section of Stockholm.  The count of the title is in truth just a well-dressed bum, and the film spends much of its time on his and his pals’ (also bums) antics to cage drinks and evade the bumbling police.  Back in the 1930s, alcohol was rationed in Sweden.  If you had a steady job, you got a ration book with which you could buy liquor.  No book, no booze.  There has also been a jewel theft in town, and a handsome young stranger, Äke (played by Edvin Adolphson, who co-directed the movie with Sigurd Walden), has checked into a local hotel.  Is he one of the thieves?  People, and the police, are wondering.  Working in the hotel is the chambermaid Elsa, played by Ingrid Bergman.  She and Äke become the film’s romantic interest.  Finally, there’s a second romantic plot, but this one of an allegedly comical nature, involving the fat, middle-aged, single, fish-monger Amalia and her efforts get to a husband.

If it all sounds like harmless and mindless entertainment, you’re right.  And if it all sounds tiresomely familiar, you’re right there as well.  Back in the 30s and 40s, Hollywood, too, was cranking out these kind of films: low budget, low characters, low laughs.  And just as in the American product, there are no surprises in this one either.  In the end the lovers unite, the jewel thieves are caught, Amalia gets her man, and the count gets a job and, thus, his hooch.  These are not spoilers - plots as light and predictable as these can’t be spoiled. 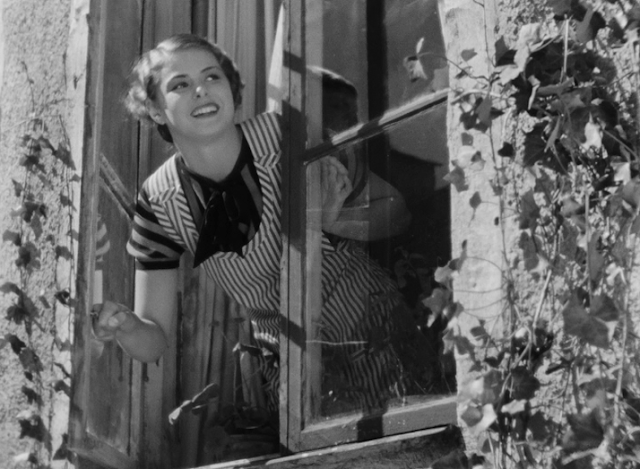 The performances are fine; they meet the low bar set by the script.  Bergman isn’t meant to be anything more than a pretty romantic lead in this film and she fills that role well, but she doesn’t break out or shine.  Her co-star Edvin Adolphson also gives a serviceable performance.  As for their comic co-stars littering this film, I found them uniformly unfunny.  They have the polished artificiality of actors who’ve worked the stage a little too much (or not well enough, or both).  I don’t know if Sweden ever had a vaudeville or music hall circuit, but these performances have the same overworked “this-killed-in-Peoria” slickness and mediocrity of those wretched institutions. 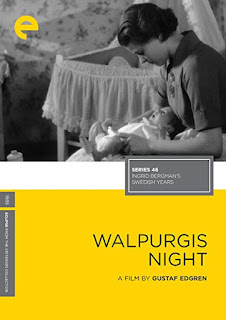 Walpurgis Night (1935)
Directed by Gustaf Edgren, this is a very socially conscious movie.  In the 1930s the population of Sweden was in decline, and this was a matter of great public concern.  Apparently, Swedes were not humping enough.  (Perhaps if they lifted the alcohol ban, the problem would have taken care of itself.)

Ingrid plays Lena, an unmarried young secretary secretly in love with her successful boss, Johan.  Johan, though, is married to Clary but their marriage is on the rocks.  Clary is a cold and callous socialite, unwilling to start the family which Johan wants.  She is also, unknown to her husband, pregnant.  She decides to get an abortion and we’re introduced into the process of how these things were arranged back in the 30s.  Lena’s father, Fredrik (played by the great Swedish director and actor Victor Sjöström), is a newspaper editor who likes to pontificate - at length and repeatedly- about the fertility crisis (the solution is love, he assures us).  He soon comes to suspect that his daughter is romantically involved with Johan.  From this point on, the already convoluted plot becomes a bit of a train-wreck; post-abortion there are police raids, mistaken identities, blackmail, a shooting, and a suicide note that untangles it all at the end.  In other words, it’s a typical melodrama.

The Walpurgis Night of the title is April 30th, which is when most of the events in the film take place.  Traditionally in Europe, Walpurgis Night is a time for large public demonstrations against (or, perhaps, for) witchcraft.  People march through the streets, there are bonfires, etc.  In Sweden, though, it’s only a celebration of fertility and the coming of spring.  Still, while completely innocuous in this film, the footage of young men in 1930s Europe roaming the streets in groups, singing rousing songs about rebirth, and gathering in the dark around bonfires is a little disturbing.  Seeing it reminded me of the bonfire scene in the Mickey Rooney-Judy Garland film Babes in Arms (1939).  There, too, a crowd of singing, determined, torch-bearing youths march into town at night and start a bonfire.  At one point in that Busby Berkley extravaganza someone actually begins to sing Wagner's "Ride of Valkyries".  Clearly, something was in the air at the time (and it wasn't love).
Walpurgis Night is not a bad film, but it's not a particularly good one either.  As with so many films with a message it's weighed down by its own self-importance.  The characters are one-dimensional and Bergman's performance is not especially good.  She is too fidgity, spending most of the movie looking confused or hurt.  The performance lacks depth.  In her defense, so does the character.  When the material is so thin that an accomplished actor like Victor Sjostrom can't add dimension to a character then there's not much hope for a cinematic newbie such as Bergman.  Despite these limitations, though, the film is worth watching as a historical document.  It's unusual to see a film from this period dealing so candidly with abortion and sexuality in general.  Walpurgis Night was released in the US and I would love to see the American version.  It was heavily cut to avoid offending various Legion of Decency types.  I would be intrigued to see how coherent the resulting film was.

Posted by Andy Nicastro at 5:35 AM