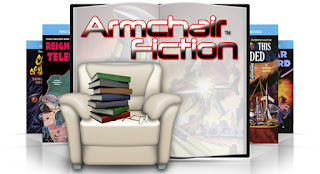 Armchair Fiction is the book publishing branch of Sinister Cinema, the mammoth online retailer of unusual horror, sci-fi, schlock, and B-movies.  AF publishes mostly classic sci-fi novels, but they have branched out into pulp fictions from the 40s, 50s, and 60s as well.  I love these books.  Along with Hard Case Crime and Stark House Press, Armchair Fiction is one of my favorites publishers of classic pulps.  They’re printed as two titles to a volume and I’ll usually snap up a few when they issue new releases - which they do several times a year.  Here’s a look at one of the recent pairs I picked up. 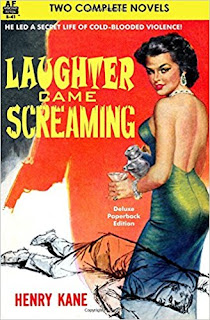 Laughter Came Screaming (1953) by Henry Kane
Highly enjoyable.  Jimmy Berio, a Chicago tough guy, pulls off the ultimate heist.  But in the process he double crosses two of the dangerous Ruggeri brothers; and unfortunately there are three more Ruggeri brothers out there to get revenge.  So Berio lams it, disappears.  He goes to France.  A year later he comes back with a new face (thanks to plastic surgery) and a new name - James Barr.  He restarts his life as a respected and successful New York lawyer.  But the past catches up with him.

Henry Kane is one of those hard-boiled writers whom time has unjustly forgotten, though with some luck this reprint should help to correct that.  Kane’s writing style is what makes this novel so good.  From the opening page we’re plunged into a world of suffocating fear, dread, and paranoia.  And I mean literally from the opening page - Barr is sitting in a doctor’s office and the ticking of a clock become a Poe-esque source of terror.

The thick muffled ticking of an old-fashioned clock, tall in a far corner, was personal to him.  It called out his name.  “Berio,” it called.  “Jimmy Berio.”  It swelled, held high, subsided, called again.  “Berio,” it called, growing larger.  James Barr sat motionless as the ticking merged to the constant sound of a word repeated, beating back from the walls, fluttering as though imprisoned in the room…He could have gone across and stretched out a hand and ended the throb of the pendulum, but there was no method to reach into the fear that had congealed, stiff and sudden and remembered, as he had pushed open the door on the dim numb quiet of the waiting room, when the ticking had been normal and remote.

Is this tough-guy prose driven to the point of self-parody?  Maybe.  One senses that at some level tongue is placed firmly in cheek with this.  Still, Kane pushes this schtick as far as possible and the effect is liberating.  His style becomes deliciously baroque, mannered, and yet it has a hallucinatory vividness which is perfect for its subject.  For example, in the early part of the book, Barr is in a crowded saloon to get a drink.  When he tries to leave, another man attempts to stop him.  Barr doesn’t know if this man is just a drunk or a killer sent the by the remaining Ruggeri brothers.

Panic swirled.  This was either an obnoxious drunk or a man pretending.  He [Barr] was not going to stay to find out.  He tried to push past him.  “So you want to play?” the man said.  He saw the fist, but could not avoid it.  It struck him on the mouth making it numb.  He answered quickly.  Street fighting was an old and unforgotten art.  He kicked his knee into the man’s groin, heard the grunt of surprise, drove his fists into the popping eyes.  The man fell, slobbering.

Standard tough-guys-fighting fare, but the end is the interesting part.  The language itself starts to take on a fevered or delirious tone.  Notice that Barr doesn’t punch the man in the face but rather in his eyes - which are “popping,” like the eyes of a cartoon character.  And the most salient part of the man’s fall is that he slobbers.  If Dostoyevsky wrote pulp fiction it would probably read like this. 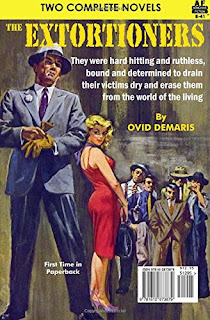 The Extortioners (1960) by Ovid Demaris
A mixed bag.  Wealthy Los Angeles oilman Hugh DeWitt casually hints at a business prospect to small-time hood Joe Rizzola.  Rizzola partners up with big-time mafia boss Jimmy Grazio.  When the prospect doesn’t pan out, Grazio wants his profits anyway.  Soon DeWitt and his family are the targets of terror and violence.  There is lots of mayhem.

The first half of this book is pure delight.  The characters are vivid, colorful, lively.  You devour the pages like candy.  For instance, in the opening of the novel, Rizzola and his wife pull up in front of DeWitt’s huge ranch house.  “Smell it, baby?” he says to her.  She asks if he means the jasmine.  He replies: “Naw.  I mean the money.  The mazoola, kid.  The smell is everywhere.”  Oh, yeah, it’s that kind of good.  But midway through the novel Demaris seems to give up; we meet two of the dullest police in pulp fiction history and suddenly Demaris is rushing to end the story.  The build up of the first half collapses (slobbering?) into a heap of implausible coincidences and sudden personality changes among the characters.  Ultimately this book was a rush job and it shows.  Nonetheless, the first half was very entertaining.

Posted by Andy Nicastro at 5:23 AM