How long must I read a book before I can abandon it with a good conscience?  Ten pages?  Fifty pages?  Or should I go by percentages?  And what percent?  Ten?  Twenty-Five?  These questions confront every serious reader.  You can't finish every book you start. Or, at any rate, I can't.  Sometimes I just need to cut bait and move on.  The only question is when and why.  Sometimes the reason I give up on a book is more notable than why we stick with one.  Below are two examples 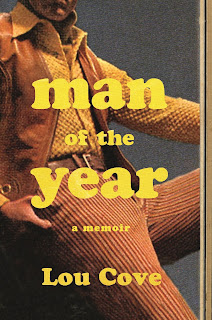 Man of the Year: A Memoir by Lou Cove.  This dud is set in Salem, Massachusetts during the 1970s when Cove was twelve.  He meets one of his father's friends who turns out to be a Playgirl centerfold. This greatly impresses young Cove so he launches a campaign to become Playgirl's Man of the Year himself.  It all sounds very goofy and appealing in a cheesy-70s-shag-carpet kind of way.  I never made it past page seventeen.

The book opens with our hero waking one cold morning to deliver papers on his paper route.  We get a quick description of the town.  At the end of his route he bumps into Gretchen, another twelve-year whose speech is written out in dialect ("Didja finish yah route?").  She also offers to show young Lou her beaver.  He declines and goes home. There we meet his wacky yet lovable Jewish family.  They are, of course, very colorful.  They have a lodger named Peter.  He is gay.  Flaming.  He sweeps into the room and says sitcomy things like "Did someone say balls?"  There's a knock at the door.  It's Gretchen.  She comes in.  Papa Cove makes her eat a bagel.  She and Lou leave the table.  When they're alone, she begins to kiss him.  I stop reading.

So cliched, so phony, so hackneyed, so Spielbergesque (except for the beaver part)!  It reads like the novelization of the tritest screenplay in the world.  Another problem is the subtitle: "A Memoir".  If this book was subtitled "A Novel" I wouldn't be so harsh on it.  I would've dismissed its flaws as the inevitable stumbling of a first time novelist and given it another thirty pages.  But call it "A Memoir" and the contrived unreality of it all becomes obvious and intolerable.  You can't argue with a man's memories but you don't have to read them. 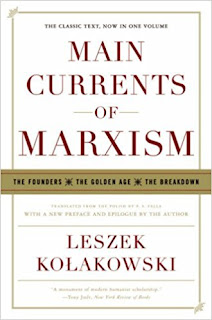 Main Currents of Marxism by Leszek Kolakowski.  At 1,214 pages this is a monster of a book.  I was about 50 pages in and started to just skip around in it.  Then I went to the final paragraph, which appears in a new epilogue written for the book in 2004. Here it is:

But we may safely predict that Marx himself will become more and more what he already is: a chapter from a textbook of the history of ideas, a figure that no longer evokes any emotions, simply the author of one of the 'great books' of the nineteenth century - one of those books that very few bother to read but whose titles are known to the educated public.  As for my three, newly combined volumes, in which I tried to sum up and assess this philosophy and its later ramifications,...they may perhaps be useful to the dwindling number of people still interested in the subject.

So, then, why should I read this book?  This is a strange final paragraph. Kolakowski's attitude toward his subject is sneering, belittling, and dismissive.  Normally an author, no matter how minor the topic (lint, salt, the history of the comma, etc.), tries to convince the reader that their book is of major importance.  But Kolakowski seems to delight in the prospect that fewer and fewer people will have an interest in Marxism and, hence, his book.

Posted by Andy Nicastro at 6:01 AM