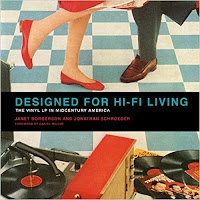 I very much enjoyed Designed for Hi-Fi Living: The Vinyl LP in Midcentury America by Janet Borgerson and Jonathan Schroeder.  It's a fun book.  This is a collection of album covers from the 1950s and 60s in that unusual genre of, for lack of a better phrase, background music.  I think that the titles will make it clear:  Music for a Back Yard Barbecue, Music for a Chinese Dinner at Home, Christmas in New York, A Visit to Finland, Kasongo: Modern Music of the Belgian Congo, etc. 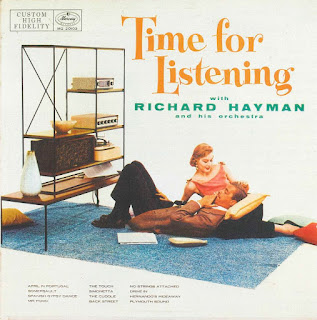 These albums were all over the place in the 50s and 60s.  The post-war boom was underway and people had money to spend.  They bought homes and needed to fill them.  The Hi-Fi was a vast improvement in sound quality compared to earlier record players, some of which needed to be wound up by hand.  Your home was just not complete without a new Hi-Fi.  So you bought one, but you needed albums for it.  You had the obvious choices - Sinatra, Mathis, Cole, a Broadway show or two, a little jazz - but somehow it wasn’t enough.  You wanted more from this fabulous new machine.  Well, the record companies heard these millions of unuttered prayers.  These albums offered whole new ways to listen to and experience music.  They would show you how to use it to enrich your life.  They showed you, in short, how to have a Hi-Fi lifestyle.

The covers functioned as advertisements, even as fashion plates.  Take a look at Time for Listening (above).  It’s got everything: Hi-Fi, cigarettes, stylish furniture, beautiful wife (who also functions partly as a sofa).  Even the ashtray makes a statement.  You didn’t buy this album for the music, you bought it to be that guy in the picture.  Album covers like this were of piece with magazines of the time, like Esquire or Playboy or Gentry.  They told you how to be a modern man.  And for women there was Better Homes and Gardens, Good Housekeeping, or Vogue. 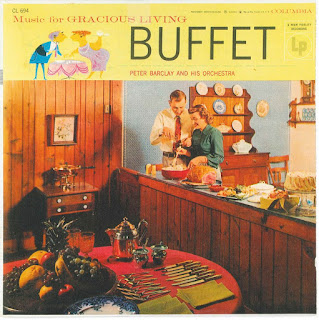 Some of these covers look comical today.  Music for a buffet?  Surely these people knew how to put out a buffet.  Did they?  (Do you?)  In 1962 what music would you play for your buffet?  Elvis?  String quartets?  John Philip Sousa?  Should you even have music?  Don’t worry.  Columbia Records has you covered with Buffet (right), part of their “Music for Gracious Living” series (and featuring the biggest damn fruit tray I’ve ever seen).  There was no event for which you could not find music.  The “Gracious Living” series also included such titles as After the Dance, Do-It-Yourself (music for the workshop), Barbecue, and Foursome (as in card games - this was the 50s).  Which brings me to my one complaint about this book.  It doesn’t show the back covers of these albums.  And that’s a shame.  The liner notes would have been as interesting, entertaining, and informative of the era as the covers. 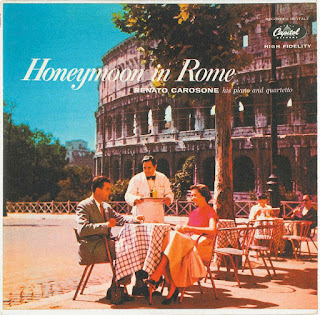 The authors have arranged the collection by theme.  Travel is a big one.  New York City, Hawaii and pre-Castro Cuba have whole sections devoted to them.  There are albums featuring the music of Japan and Argentina and Russia and India and the Zulus.  If you couldn’t go to Cairo, Capitol Records would bring Cairo’s music to you with their international "Capitol of the World" series (interesting title, that).  There’s a section devoted to albums covers with airplanes.  And, of course, the  honeymoon genre: Honeymoon in Paris, Honeymoon in Dublin, Honeymoon in Rome (left), etc.  Even though the two guys at the table in the background of the Honeymoon in Rome cover do look a little ominous.  In a way, all of these albums performed the same function in their day as Martha Stewart and Anthony Bourdain do in ours.

These albums could even take you to outer space.  Or, rather, pretend to.  Adventures in Sound and Space with Col. Frank Erhardt and cast is a drama which takes the listener on a fictional voyage to the Moon, Mars, and back.  Along the way we encounter, according to the cover, “Space Station,” “Moon Crash,” even a “Space Storm” before encountering “Mars and the Secret of the Canals”.  There’s also Ron Goodwin’s Music in Orbit (below) with its sci-fi cover depicting a purple earth (!) with an abnormally large United States. 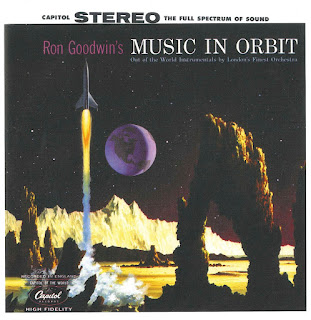 This book could also have been called Album Covers of the Empire.  It captures the United States and its citizens at the height of their power and prosperity.  No doubt its breezy use of national, gender, and racial stereotypes will irk the sensibilities of those poor bastards born into the waning years of American awesomeness.  As for me, I love the confidence and self-assurance that underlies these covers.  I knew these people.  They were my parents and their friends.

My Dad had a small collection of albums like these.  I found them fascinating.  I would flip through them and wonder who is this man who bought these records but never listens to them.  His biggest affinity was for music from Spain, especially the music of bullfighting.  He was not, let me add, a former Spanish bullfighter awash in nostalgia; he was, in fact, an Italian-American professional photographer from Garfield, New Jersey.  Once I put on one of these bullfighting albums.  It was a live recording of the trumpets that play at the beginning of the event as the matador and picadors come out.  It was, frankly, a little boring.  But so what.  My Dad liked bullfighting and by purchasing those albums he affirmed that fact.  It was his way of saying “Yes, that's right, I’m a guy who likes bullfights.”  That record companies would actually produce albums to feed such an obviously small market is a testament to the abundance of post-war American capitalism.

Posted by Andy Nicastro at 6:21 AM