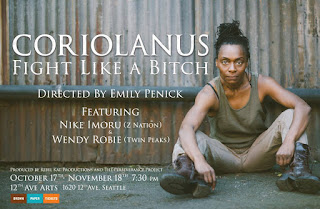 This weekend I went to see Coriolanus: Fight Like a Bitch at the 12th Ave. Arts theater.  The subtitle is obviously not Shakespeare's.  It was no doubt added to make the play sound cool and hip and relevant to the modern day - days in which many of us, apparently, need to fight like bitches.  (Who knew?)  But no matter.  Anything that gets people to see this extraordinary play is fine with me.  Director Emily Penick, under the auspices of Rebel Kat Productions, has delivered a magnificent staging - timely, classic, and entertaining.  And those are not three adjectives that normally go together with as granite-like a play as Coriolanus. This is a forbidding work but I could not conceive of a more appealing, accessible, or satisfying production.

Not only does it have an all female cast but the play has been reimagined as all female characters.  Hes are now shes; sons are now daughters.  It is a woman’s world.  The production is also highly stylized, using choreography and mime (the good kind - don’t worry) to make its points.  The main-stage at the 12th Ave. Arts theater is a runway and viewers are seated on either side of it.  While a scene is playing out on one end another action may be discreetly playing out on the other.  This is a production with centers and margins.  There were more than a few times when I thought I should see it again just to focus on the peripheral action.

But that won’t happen for the simple fact that Nike Imoru’s performance in the lead role is so powerful and compelling that when she’s onstage I'm not going to notice much else.  She dominates the play.  Her Coriolanus is by turns proud, violent, sarcastic, etc. but Imoru also brings out the vulnerability and humor in the character.  This is a dancer’s performance, even the way she holds her body when silent conveys meaning.  And being British she has an ease with Shakespearean language that her American counterparts lack (I know that’s a critical cliche, but it’s true).  Her delivery not only brings out the musicality of the language but makes some of the play’s more dense passages crystal clear.

The rest of the cast are also outstanding.  A few deserve special note.  Wendy Robie plays Volumnia, Coriolanus’s mother.  Beginning as a calm and unassuming presence, over time she reveals her viciousness and cruelty.  Many actresses can't resist chewing the scenery in a role like Volumnia, but Robie knows better.  Kate Witt was a delight as the dissolute Senator Menenius - though they cut out the great line of hers in which she describes herself as being more conversant “with the buttock of the night than with the forehead of the morning.”  And so convincing were Katherine Jett and Yadira Duarte as the corrupt and scheming tribunes that I’m ready to write in their names on Tuesday’s ballot.

Shifting the gender opened up some dramatic possibilities but closed others.  I thought the end of play was weakened by it.  In the final scene Aufidius, leader of the Volscan army, is determined to kill Coriolanus.  So he starts to goad him.  Nothing works until he calls Coriolanus “boy”.  At the sound of that name Coriolanus explodes into rage (as a boy would).  He starts yelling at Aufidius (I paraphrase) “‘Boy’?  This ‘boy’ killed all your Volscan families and you know it!”  At which point the surrounding Volscan troops, being reminded of their grief, stab him to death.  Switching “boy” to “girl” dilutes the effect.

In many cultures (Republican Rome, Elizabethan England, etc.) the transition from “boy” to “man” is an elaborate cultural process, often accompanied by ritual humiliation, sadism, and the killing of defenseless animals.  Once you're a "man", you are (in theory) no longer a "boy".  So when one alpha male calls another alpha male “boy” it is a direct assault upon the male identity.  I don’t know that calling a “woman” a “girl” has the same power or operates in the same way.  In addition, I believe that one of Shakespeare's intentions in Coriolanus was to question and even mock the psychopathic, homicidal masculinity of his hero (and of all tragic heroes).

However, the gender switch also creates new avenues of expression.  In the scene in which Coriolanus leaves Rome under sentence of banishment, her family and a few friends gather at the city gate.  They quietly form a circle and hold hands.  It’s a moment of genuine tenderness, reminding us that Coriolanus's banishment is also the destruction of a community of family and friends.  Such beautiful moments, and there are many others, would not be possible (or plausible) without the gender switch.
So, all told, an unforgettable production which you should not miss.

Posted by Andy Nicastro at 5:16 AM