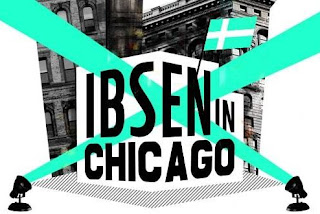 In the 1880s a group of Scandinavians in Chicago decide to put on a production of Henrik Ibsen’s Ghosts.  Thus begins David Grimm’s new comedy Ibsen in Chicago, a world-premiere currently playing at the Seattle Repertory Theater and directed by Braden Abraham.

This is an entertaining little theatrical capriccio.  It's genial and engaging.  It doesn’t strive for much.  It has no great insights into Ibsen, or Chicago, or theater in general.  If not quite a light comedy, it certainly isn’t a heavy one.  Its grasp is solidly within its reach (or is that “reach within grasp"?  I can never get them straight.).  It was pleasant and enjoyable. Has a certain tepidness crept into my language about this play?  Yes, it has.  Because, despite its many good qualities, it is a rather tepid play.  It shines but it doesn’t sparkle.  Words like bad or disappointing are too harsh.  It is neither of those.  It is good.  It’s the perfect play to see on a first date.  But I wouldn’t pay to see it again.  However, if I were walking past the theater, had an hour and forty minutes to kill, and someone handed me a free ticket, I’d eagerly go in.

Here’s the story: Henning, a young Swede, wants to be the first person in America to stage Ibsen’s Ghosts.  He loves Ibsen, but, even more, he loves Helga, a slightly older, over-dressed, flamboyant, and allegedly highly-accomplished diva from Denmark who has fallen on hard times here in America.  They are lovers and he believes that the part of Mrs. Alving in Ghosts is perfect for her.  She is no Ibsen fan and would rather perform the works of Hans Christian Anderson.  The location they settle for (which is the single set for the play) may be the least bad one they could find but it is also the haunt of the hard-drinking Pekka, a low-level hood wannabe, and Per, a genial ne’er-do-well.  They, of course, wind up acting in the play.  Only one young woman shows up for the auditions, Elsa, so she gets the remaining role.  The one thing in this play that should have been cut out was the verbal cat-fighting between her and Helga - yes, that tiresome theatrical clichè.  Finally, as prompter, stagehand, and box office manager they bring in the mousy and neurotic Solveig, who is Henning’s landlady’s daughter.

As a play about backstage life there are certain predictable story lines: the backstage romance, the ordinary person who turns out to be a great actor, the comical high maintenance of the diva, opening night shenanigans, etc.  And if Grimm doesn’t tread new ground in any of this he certainly passes quickly and with a sure foot over the old ones.

Although set in the 19th-century, the play deftly touches on issues of the moment.  “It’s a shithole,” Helga announces at the start of the play, referring to the ratty playhouse Henning has found; and a current went through the audience at the word.  (The cursing throughout the play, let me add, is completely anachronistic - a grande dame like Helga would never have used a word like "shithole.")  Later on Elsa notices that Ibsen regards it as tragic that a man gets syphllis but is indifferent to the fact that the women in the play have it too.  As Scandinavians in an overwhelmingly Irish city (at least at that time) all the characters in this play have chips of varying size on their shoulders.  At a moment of despair in the play, Henning cries out “Fuck America.”  That one got gasps from the audience; not for the f-word (or for the false note of a 19th-century man using it in mixed company) but for the pain that underlied the sentiment.  At one point or another I imagine every immigrant to our country has felt that way.  In fact, many of us born here feel that way on a pretty regular basis; I think it’s part of being an American.  You could even say that the minute an immigrant says “Fuck America” he has truly become one - bitter disillusionment coming with the ideal.

This is a wonderful ensemble, but R. Hamilton Wright deserves special notice.  He is hilarious in the role of Per.  When required to audition for the part of Engstrand, he begins by mooning everyone.  He apologizes, explaining that he was so nervous that he felt the need to debase himself in order to calm down.  He then starts to recite Patrick Henry’s “Give me liberty or give me death” speech, physically enacting every verb and adjective he can.  It was uproariously funny.

It would have been good if the Seattle Repertory, in the style of true reps, had mounted a production of Ghosts this season with, of course, the same cast members as would later appear in Ibsen in Chicago.  I grew up in northeast New Jersey and the best theater I ever saw was the New Jersey Shakespeare Festival housed at Drew University in Madison, NJ.  It’s still there, but now renamed The Shakespeare Theater of New Jersey (and their 2018 season, by the way, looks amazing).  I had seen many a Broadway and off- and off-off- Broadway production while growing up.  Uniformly they were over-priced and over-hyped crap.  It was only at the NJSF that I discovered that theater was an art as genuinely great as novels, movies, music, or painting and sculpture.  One of the ways they did that was by pairing plays.  A season would start with Hamlet and then do Tom Stoppard’s Rosenkrantz and Guildenstern are Dead with the same cast in the same roles.  The next season they staged Wilde’s The Importance of Being Earnest and followed it up with Stoppard’s Travesties, a comedy about a mis-remembered production of Earnest in Zurich in 1917.  The actors from Earnest played their counterparts in Travesties.  A season or two later they mounted King Lear and Harold Pinter’s The Caretaker, with the same actor playing Lear and Davies, the old tramp in Pinter’s play who is taken in by two brothers but ultimately kicked out by them at the end of the play.  Like a man, no play is an island.  And a theatrical repertory has the duty to preserve and pass on the history, and the historical interconnectedness, of plays.  Unfortunately, in this case, the Seattle Rep has not lived up to the mark.

Posted by Andy Nicastro at 5:06 AM