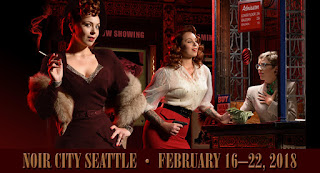 Day three of Noir City 2018 was Sunday and it was a cavalcade of film noir classics.  First off was Mildred Pierce, Michael Curtiz’s adaptation of James M. Cain’s 1941 novel, with Joan Crawford delivering an amazing performance in the lead role.  Later in the day The Blue Dahlia starring Alan Ladd and Veronica Lake, screenplay by Raymond Chandler.  After that The Big Sleep, directed by Howard Hawks, starring Humphrey Bogart and Lauren Bacall, based on Chandler’s novel, screenplay by, among others, William Faulkner.

Jealousy (1945)
Janet Urban is an LA taxi driver married to Peter, an emigre writer prone to anger, alcoholism, and unemployment.  His genius, apparently, is not appreciated in the US.  One day Janet meets Dr. David Brent (oh, what a fine name for a doctor) and they become friends.  Soon they’re in love with each other.  But, unknown to him, Dr. Brent is already loved by his colleague, Dr. Monica Anderson (another solid doctor name), and she’s not going to give him up.  Throw in a gun and you’ve got murder.

Directed by Gustav Machaty, this little B movie isn’t much on first viewing.  But it grows on you.  I have a feeling that this will be the one film from the festival that I’d most like to see again.  It’s pure B - tight story, no big name actors, the sets look recycled, and you wonder if some of the props didn’t have an odd smell.  The actors - in order of the summary above, Jane Randolph, Nils Asther, John Loder, and Karen Morley - all do a good job.  But there’s a quiet weirdness to this film that lodges in the memory.  For example, in one scene Janet and Peter are at the beach.  He begins to throw pieces of bread into the air for the seagulls.  But when we see the flying seagulls grabbing the bread it’s in slow motion, giving the whole action a strange and hypnotic effect.

One of the thrills of Noir City is the chance to see rare films.  And this one fits the bill.  According to festival host Eddie Muller, this is the only extant print of Jealousy.  (Thank you for sharing, British Film Institute.)  The print is missing some of its opening titles and its ending sequence.  But I think that adds to its appeal.  There’s no reuniting of lovers while the music builds to its “The End” crescendo.  Instead the killer reveals him or herself (I’m not saying which - but the confession is awesome), a character leaves the room, walks down a corridor and suddenly the sound system emit that loud “Pft” noise as the soundtrack ends and the whole audience is plunged into darkness.  It was chilling - as if the film itself was suddenly murdered.  It gave me goosebumps.  And it gives me goosebumps again just to recall it.  Now that’s a movie.

Posted by Andy Nicastro at 7:11 AM