Saw the Strawberry Theater Workshop production of Frost/Nixon at 12th Ave. Arts on Friday.  Written by Peter Morgan and directed by Greg Carter, it tells the background story of David Frost’s famous interviews with Richard Nixon in 1977.  This production puts a twist on the tale, though, by featuring an all female cast.  This is very trendy.  Even during the few short months of this blog it has already becoming something of a cliché (and verging on becoming a tiresome one, too).  Nonetheless, I like to keep an open mind.  Could they pull it off?  Is it good theater? No.

The re-gendering of this play just doesn’t work.  It’s an obstacle, a distraction.  There’s rarely a time when the viewer is not painfully aware that these women are imitating men rather than, for lack of a better phrase, being their characters.  Try as one might, no suspension of disbelief is forthcoming.  In a sense the attempt was doomed to fail.  It might have been more convincing had they completely reconfigured the play - as did a superb recent production of Coriolanus - and set it in an all female world; a female Nixon, a female Frost, change all the pronouns, etc.  But Morgan’s play is overtly historical, even educational.  Characters directly address the audience to give background information and to draw conclusions at the end.  The play’s ambitions to be an accurate docudrama of events would obviously be thwarted if the setting was transferred to an all female world.  And to drop all those pedagogical moments would be to radically transform Morgan’s play and possibly invite the intervention of his lawyers.  Thus the current mess.

Also, one of the main culprits of the gender-fail may be nothing more than the shoddy costuming by KD Schill, especially of the two leads.  As Nixon and Frost, respectively, Amy Thone and Alexandra Tavares are in suits and ties for much of the play, but the suits don’t fit right.  They’re too large, making each women look shrunken and ill at ease in her clothes.  Now a certain bagginess in the suit would be appropriate for Nixon but they were much too loose on the ultra-slim Thone.  I think you could have comfortably fit a grapefruit between her neck and her shirt collar.  And there were more than a few times that the tail end of Tavares’s suit jacket would jut out, duck-style.

Gender-wise, the worst moment in the play was the scene in which Frost hits on Catherine Cushing during an airplane flight.  Catherine is played by Anastasia Higham.  She is a woman.  The character is a woman.  The effect of a woman playing a woman surrounded by women pretending to be men was off-putting and served merely to underline the artificiality and awkwardness of this conceit.  It had the same effect as seeing Elvis surrounded by Elvis impersonators.

Unfortunately, the performances of the two leads were not good enough to save this production.  The role of David Frost requires glitter, flash, charm.  He was a TV star and jet-setting playboy.  In other words, it should be hard, if not impossible, to take him seriously.  He should seem like a light-weight.  Yet despite her best efforts, Alexandra Tavares can’t help but come across as a serious, thoughtful person.  Facile is simply not in her toolbox.  I’d believe her in any other role, but not this one. 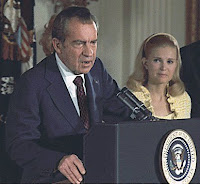 Thone’s performance of Nixon, on the other hand, rarely rises above mere imitation.  The soul of Nixon - the dark, moist, brooding, resentful, crepuscular soul - eludes her.  The performance is all surface.  I remember watching Nixon’s farewell speech live when I was young.  It was one of the most painful and disturbing speeches in American history.  Clearly this was a man exhausted, humiliated, destroyed, at a point in his life where many other men would have either given their life to Jesus or put the barrel of a shotgun in their mouth (or both).  Yet Nixon was beyond such options.  He wasn’t staring into the abyss; he was the abyss.  And when he drifted off into the “My mother was a saint” part of the speech you began to wonder if the President of the United States was going to have a complete, total, hysterical pants-shitting breakdown on live TV.  Yet when Thone delivers a portion of it in the play it is devoid of depth.  She has down Nixon's voice and walk and mannerisms, but that's all.

So, in conclusion, an all around unsatisfying production.


Frost/Nixon will play at 12th Ave. Arts until February 17.

Posted by Andy Nicastro at 6:11 AM