The Shining - Forward and Backward 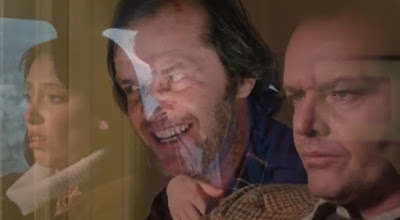 On Friday evening I went to the Northwest Film Forum to see Stanley Kubrick’s The Shining. But it wasn’t just any run-of-the-mill showing, it was a special forward/backward one.  Here’s how it works - they run the film forward and backward at the same time and superimpose the images one over the other.  It sounds crazy, but it is also amazing - at least for this film.  If you’re a Shining fan - and I’m a huge one - you have not lived until you’ve seen this.  And, luckily, you can see it for free online right here.

The Shining is full of mirrors and doubling imagery.  (FYI-There will be many spoilers throughout this post.)  There are the creepy twin girls.  The meaning of “redrum” is revealed in a mirror.  When Wendy brings Jack breakfast in bed the scene is mostly shot in the mirror.  When he's interviewed for the job, the man sitting next to him looks vaguely Nicholson-ish.  When Jack returns to the family apartment after visiting Room 237, his face is reflected in a mirror near the door (when he returns with the axe later, it won’t be).  The first time we see Danny “shine” is when he’s looking in a mirror and talking to his imaginary friend Tony.  And there seem to be two murderous Mr. Gradies - Delbert from the 1920s and Charles from the 1970s. 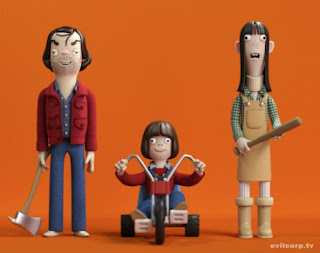 Back in 2011 two film editors and Shining fanatics thought, “Hmm…maybe this film is itself a mirror?”  So they lined up the first shot of one copy with the last shot of another and ran them in opposite directions.  The results are awesome and uncanny.  For instance, the scene in which Wendy brings Jack breakfast in bed and he starts talking about his writer’s block overlaps perfectly with the later scene of him fondly going through his “All work and no play…” manuscript in the Colorado Room (36:49 in the link above).  During the interview at the beginning of the film we see the later Jack running and howling through the maze (5:43).  The iconic “Hello Johnny!” scene overlaps with both the family car ride (and it’s Donner party discussion) and with Wendy’s calm and delusional recounting of Jack’s history of domestic violence (16:30).  And if you thought the scene with the two Grady girls butchered in the hallway couldn’t getter any scarier, go to 50:00 and think again.  The mid-point in the film, by the way, is the scene of Dick Halloran laying on his bed watching TV while Jack is entering Room 237 (1:11:14) - it’s a psychedelic moment and got a big cheer from the audience at the instant of synch up.  That scene is also the only one in the film when all those who can shine (Danny, Halloran, Jack, and the hotel) do so together. 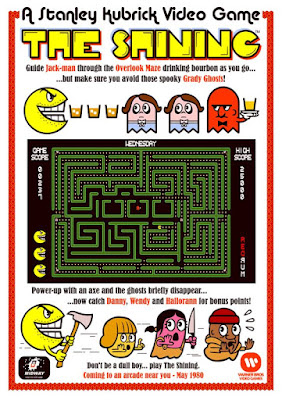 Is all of this intentional on Kubrick’s part or is it merely coincidence?  We don’t know.  He made some cryptic remarks about how important it is to view films backwards but he never indicated that his films should be viewed so.  If he knew of these sorts of screenings he would probably have objected strongly to them - and then arranged a viewing for himself, and followed that up with edits to heighten the forward/backward experience.  And to rule out coincidence we’d need to do similar projections of other films (The Sound of Music, Police Academy 6, etc.) and see if equally uncanny moments pile up.

What we do know, though, is that no other film has generated so much demented enthusiasm from its fans as has The Shining.  There are designs for doll/action figures of the characters (way above).  There’s a child’s push-toy based on it (way below).  One artist, Michael Whaite, even reimagined the film’s poster as a The Shining-Pac Man mash-up (right above).  What’s next?  A coloring-book?  A tie with the creepy girls on it?  (I’d so buy that.)  A musical adaptation on Broadway?  The possibilities seem endless.  The fans' passion for this film unabated. 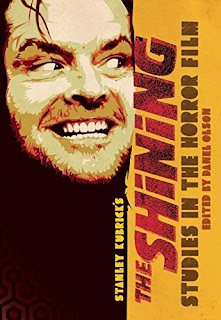 Which is why it’s such a shame that the book Stanley Kubrick’s The Shining: Studies in the Horror Film is now out-of-print.  Published in 2015 by Centipede Press and edited by Danel Olson, it is the definitive book for all things Shining-related.  Copies on Amazon start at about $100 apiece, so fans should look for it in second hand bookstores and at any library savvy enough to have snatched up a copy.  I feel bad about reviewing an out-of-print book but this one is such a gem I can’t resist.

Olson has done a magnificent job.  Coming in at 750 pages, this book is as thorough and obsessive as any Shining fan could wish.  It’s in three sections.  The first one contains essays (some original and some excerpted from other books) analyzing The Shining - its music, the adaptation, its critical reception, its connection to other films, etc.  Section two is interviews with the actors; section three is interviews with the crew.  Danel, along with Justin Bozung, seems to have interviewed everyone involved in this movie - and I mean everyone.  We get interviews with Kubrick, Nicholson, Duvall, etc., but also with the cinematographer, the editor, the second-unit director, the focus puller, one of the actors who played a bell hop, the actress who had one line (“Goodbye, Mr. Ullman.”).  They talk to Lia Beldam, the beautiful girl in the bathtub.  And there are two interviews with Lisa and Louise Burns the young girls who played the twins.  They’re all grown up now and are two happy, well-adjusted English ladies who just happen to be icons of horror.

And the interviews are fascinating.  For instance, Les Tomkins, the Art Director, recounts the efforts he and Kubrick took to ensure that the designs in the Overlook were accurate yet off-putting.  Even the carpeting in the hallway outside Room 237 was important.  He recalls:

[Stanley] had told me, “The carpet should be the scariest thing that you could imagine.  That’s what America is all about.”  He seemed to have this image in his head of how the carpeting in American hotels always had these ghastly colors and large patterns in them.  The carpeting was made for the film.  We just started putting together various color charts, samples and patterns.  We were putting colors like mustard, pink and brown together and in your heart you knew that they were just horrid…

So if, like me, you’re a somewhat rabid fan of the The Shining - a “shinologist", I suppose, or maybe a “shinoholic” - you'll want to keep an an eye out for this book.

Posted by Andy Nicastro at 5:31 AM