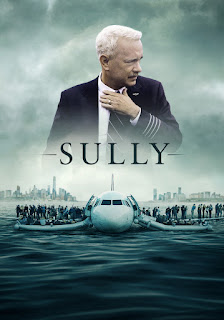 Some movies stick to you; you see them, like them, and move on, thinking that you’re done.  But you’re not.  The film has put a hook in you, and a week or a month later it’s going to reel you in.  Such is the case for me with Sully, Clint Eastwood’s 2016 drama about Chesley Sullenberger and his dramatic landing of a damaged 747 on the Hudson river in 2009.

I enjoyed the film when I first saw it, but didn’t think it was anything special.  Yet days later I found myself still mulling it over.  Something about the film, it seemed to me, was off - not bad, just off.  Tom Hanks did a fine job in the lead role and Eastwood’s directing was lean and efficient, as usual.  There was nothing wrong with the story.  But something in the film got under my skin and I couldn’t figure out what it was.

And then it hit me: This is a film about work, not just about a plane crash.  The forced water landing is the story of Sully, but the drama, which is different, lies elsewhere.  It lies in the questioning of a man’s professionalism, not least of all by himself.  Only a middle-aged or elderly man could have made this film.  Its concerns are those of maturity, of a life lived, of what’s at stake at the end of a career.  No wonder it seemed “off” to me; these are not the typical concerns of a Hollywood movie.  Eastwood and screenwriter Todd Komarnicki have flipped the standard narrative formula: the disaster is not the climax, the resolution of the investigation is.

Never mind the cheering crowds and adoring media after the crash, the NTSB has entered the picture.  Their computer simulations show that Sully could have returned to LaGuardia with the damaged plane or safely landed it at nearby Teterboro airport in New Jersey.  They’re asserting, in other words, that his decision was wrong.  And they have the power, through their investigation, to ruin him, to effectively nullify his entire career.  But there’s more.  If Sully made a wrong move, then he’s not the consummate professional that we - and he - think he is.  And if that’s the case, everything crumbles.  What he’s facing is a form of humiliation; either becoming a scapegoat or confronting the fact that he’s a man who’s bad at his job.

The drama of the movie resides in that anxiety and uncertainty, and in Sully’s refusal to accept either outcome.  He prevails, of course - swiftly and deftly demonstrating that the NTSB simulations are wrong.  What makes this film unique is that it is a vindication not only of heroism, bravery, etc. but also of the professionalism of ordinary men and women who work.

Posted by Andy Nicastro at 5:21 AM