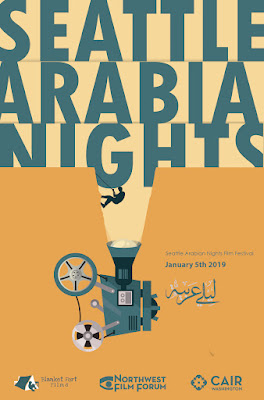 Last Saturday I went to the Northwest Film Forum to see the Seattle Arabian Nights Film Festival - a dozen short films spanning the range of the Arab (as well as Persian and Uzbek) world or dealing with the Arab experience.  As with most film festivals there were one or two clunkers, but the overall quality was quite good.  A few titles, though, stuck out.

Two of the best films in the festival were also the briefest.  From Australia came He’s Isis, written, produced, directed, and starring Mansoor Noor.  At only seven minutes it’s a very funny story about an actor, Omar (Noor), hired to play an ISIS terrorist on TV.  However, to the non-Arab director and film crew Omar just isn’t Arab enough to be convincing.  But when a real Arab ISIS terrorist suddenly shows up and takes over the studio, there’s total confusion among everyone about who’s the real Arab and/or terrorist.  A title card before the film says that this is a “tru-ish” story and the movie hilariously conveys the frustrations which Western-born-and-raised performers such as Noor have no doubt encountered over the years.

Trapped, from the US, was written, directed, and shot by Mohamed Maged and it’s even briefer - a mere two minutes.  A man walking down the street finds himself suddenly trapped in one immobile shot.  Every time he walks out of one side of the frame he re-enters on another (as you can see in the trailer below).  He can’t escape.  Why?  What has he done to deserve this?  How will he break out?  I’m not telling.  I don’t want to ruin it.  Suffice to say that this award-winning film manages to be funnier, wiser, and more memorable than most full-length feature films you’ll ever see.  In fact, this is the kind of film you would get if Samuel Beckett and Nora Ephron collaborated together. 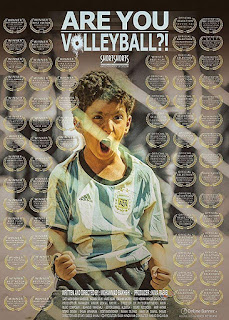 When it comes to awards Iran’s Are You Volleyball?! seems to have won just about every single one out there.  In a nameless country Arab refugees live in a detention camp.  On the other side of the barb-wire fence is the American army.  There are daily altercations between the US soldiers and their prisoners, but the story soon focuses on the kids in the refugee camp.  Despite their living conditions they are a rambunctious lot.  One day they find a volleyball.  They start kicking it around the camp and a stray kick sends it over the fence to the Americans.  The Americans throw it back.  One of the kids gets an idea and challenges the Americans to a volleyball match; “Are you volleyball?!” he asks in broken English.  Hell, yeah, they are.  And so the volleyball game between captors and captives is on.  If this sounds familiar, it's because it is; the popular Indian film Lagaan (2001) had a similar premise (Brits vs. Indians in cricket matches during the Raj).  But director and writer Mohammad Bakhshi has wisely boiled this trope down to its essentials - the powerful vs. the powerless, and sports as a substitute for war.  And he pulls it off.  This is an engaging and enjoyable film.  One gets the impression that it's a shortened version of a full-length script.  For a fifteen minute film there’s a substantial amount of character development on both sides of the fence.  And the kids, of course, steal the show.  I will not tell you how it ends, except to say that it seems to me that Bakhshi himself was a little uncertain about how to end it.  This film's success and popularity may very well come down to the fact that it evades making a political statement.  Bakhshi takes refuge finally in the idea that through sports people from different walks of life can come together and recognize each other’s common humanity.   Which is, of course, either a hopeful or delusional position, depending on your outlook.  Nonetheless, this is a very good movie.

Two films that don’t envisage the Middle East’s problem being solved by good sportsmanship are The Last Breaths (written and directed by Mohamad Al-Sodani) and The Violet (written and directed by Baqer Al-Rubaie).  Both films are from Iraq.  Both are set in the wasteland of bombed out cities (the former in Mosul, the city in the latter is unnamed).  In The Last Breaths a woman enlists a soldier to help her find her lost son. They wander through a Children of Men-esque hellscape.  In the end she finds not her son but rather a roomful of boys.  In The Violet a young boy, the sole survivor of an attack on his family, wanders a ruined city looking for help.  Soon he meets a strange girl who gives him a magical tunic that allows both of them to wander the city unseen.  They look at snipers and watch TV in an abandoned hospital, all unobserved. Both of these excellent films convey the sense of trauma and dislocation which Iraqi society has endured for the past fifteen years. 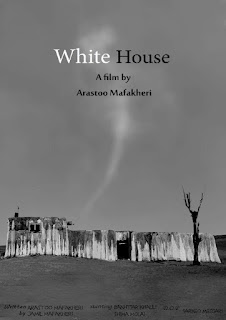 My favorite film in the festival was White House, an Iranian drama written and directed by Arastoo Mafakheri.  A young muslim cleric, played by Bakhtiar Khalili, moves to a small and desolate Kurdish village where he falls in love with one of the local girls, even though the two of them only ever exchange glances.  But the hope of winning her inspires him.  Soon he's nesting, putting a fresh coat of whitewash on the dingy clay house in which he lives.  Meanwhile he continues to fulfill his religious duties.  One day, though, he's called upon to perform a marriage for one of the middle-aged men in the village who's taking a second wife.  That wife is the woman he loves.  He performs the marriage but soon leaves the village and, we're led to believe, his career.  Mafakheri directs with a sure hand.  Although much in this film is minimal and stark, he manages to suffuse everything with a richness and fullness.  The cinematography is outstanding, as is Khalili's performance.  This is the story of heartbreak, of a heartbreak so deep that it changes the course of one's life.  Mafakheri has created a moving and powerful film out of the slightest and most mundane matter.

And finally, from Uzbekistan, there was Tea, a tale about an old, bed-ridden Uzbek man who wants some tea.  The teapot next to his bed has run out.  He rings for help but the girl who responds doesn't understand his gestures (Is he mute?  Is there a language barrier?  We're never told). Then he notices a jar on a window sill.  In the jar - tea.  The rest of the film is taken up with his herculean efforts to get to that jar. Director Shokir Kholikov sets a maddeningly slow pace to this film - I cursed him for most of this film's ten minute running time.  But I was wrong.  The slow pace deepens the film.  We're mesmerized, entranced, by the old man's efforts to get that jar.  His perseverance becomes mythic.  It's not just tea; it's about human striving and desire, it's one of those human condition things.  If the end was a little too sweet for my taste (spoiler-when the old man finally gets the tea he gives it to a young boy - his grandson? - who was also reaching for it), that's no matter; the journey was worth it.
Posted by Andy Nicastro at 6:05 AM