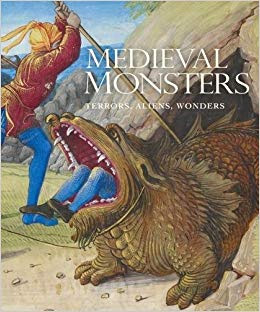 Medieval Monsters: Terrors, Aliens, Wonders by Sherry C. M. Lindquist and Asa Simon Mittman is an informative, well-written, and well-illustrated book about what people in the Middle Ages thought about monsters and how the artists of the period depicted them (the monsters, that is, not the people).  It’s the companion volume to the exhibition held at The Morgan Library and Museum in New York City last year and is based almost entirely on their extensive collection of medieval maps, tapestries, and books.  Especially books.  And specifically “books of hours”, which were devotional volumes containing prayers, psalms, and other liturgical texts for believers to use during the course of the day.  These texts were also beautifully and lavishly illustrated.

Humans love monsters.  There’s never been an era or a people that don’t have them. Even in our own rationalistic society millions of people are fascinated with zombies, vampires, aliens, and critters like the Loch Ness monster and Bigfoot.  Lindquist and Mittman cite the work of Peter Dendle who observed in 2012 that even today “the need for monsters is acute.”  That need has probably never been more acute than in the Middle Ages and that era’s creative use of them puts us to shame.  Monsters were real to people in medieval era in a way that they could never be to us.  For us, monsters are mostly a guilty pleasure.

But in that deeply religious time, monsters were not only evil and scary, they were also signs of the divine.  Augustine explicitly states that God creates monsters to show how powerful he is, to demonstrate to everyone that only he has the capacity to transcend the laws of nature (which, they believed, he created in the first place).  Thus the gargoyles atop a cathedral were symbols of the power which protected it.  Bishops had dragons engraved or sculpted into their croziers.  There are numerous legends of Christian proselytizers who got skinned alive or who had their head cut off and still went on preaching, sometimes even walking the town with their head in their hands and sermonizing.  This book contains several of those gory illustrations.  Of the four gospel writers, three were commonly depicted as animals: Luke as an ox, John as an eagle, and Mark as a lion.  Matthew was a human, but with wings.  The visuals could get quite freaky, too, as with the green-winged lion-human hybrid of Mark (above).  We don’t do anything like this today.  We don’t depict our presidents or prime ministers as animals or give them wings.  The phrase “lion of the Senate” is entirely metaphorical; if you painted one of them as an actual lion it would look silly.

God’s power could make anything monstrous, even something as mundane as hair.  Mary Magdalene, for instance, was one of Christ’s followers, present at both his crucifixion and resurrection.  During the Middle Ages she was conflated with the nameless sinful female (a prostitute, actually) who, according to the Gospel of Luke the ox, wiped tears from Christ’s foot with her hair.  “The Magdalene’s body,” our authors note, “thus became a contested site of corruption and holiness, sin and redemption.”  And she became material for legend too.  According to one of them the penitent Magdalene moved to the desert “where her clothes disintegrated and her modesty was preserved only by her luxurious hair” which, being itself touched by holiness, grew to monstrous proportions.  In medieval art loose hair usually meant loose morals.  In the picture below Mary is entirely covered head to knee in hair and accompanied by angels.  Other artists weren’t so decorous, in some depictions a breast or two was allowed to peek out.

Another female whose holiness was marked by unusual hair was Wilgefortis, a popular female saint from the late Medieval period.  She also went by the names Virgefortis, Liberata, Uncumber, among others.  These names translate respectively as “strong virgin,” “liberated,” “unencumbered.”  When her father, the King of Portugal, insisted that she marry, the pious Wilgefortis refused, telling him that she had “chosen God for her bridegroom.”  Wrong answer.  Dad was furious.  So she prayed to God to disfigure her, to “take all beauty from her in order to make her resemble him.”  And, lo and behold, the young girl soon sprouted a full beard.  This so enraged her father that he had her nailed to the cross just like Christ.  The painters depicting Wilgefortis’s crucifixion used the same iconography as they did for Christ’s: the cross dominated the picture, Wilgefortis’s head was bowed and haloed in gold, at the top of the picture the heavens opened and God looked down on her, etc.  However, the image below significantly departs from the legend.  Wilgefortis is not nailed to the cross but rather her hands and feet are merely tied to it.  She was the patron saint of, among other things, prisoners and women in labor.  In other words, she was the patron saint for women who didn't like being ruled by men or who regarded marriage as entrapment although, obviously, that could never be openly stated.

As its title indicates, this book is in three sections: terrors, aliens, and wonders.  Despite its beautiful illustrations, those hoping for an awesome book of kick-ass monster pictures may be a little disappointed.  Lindquist and Mittman are much more interested in showing the full and deep range of medieval thinking about the monstrous.  Yes, there are wonderful pictures of demons and giants, and this book, like a medieval one, is full of strange little critters loitering in the margins, but the authors scope is much broader than the merely terrifying.  In the section on aliens, for example, they document how over time women, Jews, and Muslims were depicted as demons and monsters.  And the section on wonders focuses on the ordinary and extraordinary things which the medieval mind saw as imbued with divine presence.

For instance, a bestiary is a book, almost always illustrated, which collects together information about animals.  They were very popular in the middle ages.  Many of the animals they contain are legendary, and among the most popular of them with illustrators was the unicorn.  According to the "facts" contained in the breviaries, to catch a unicorn one needed to use a female virgin as bait.  Unicorns were apparently attracted by “the sweet smell of maidenhood.”  (Who isn’t?)  Once the beast placed his head in the virgin's lap, he would fall asleep.  At which point the hunters would attack and kill him.  This legend clearly shares many similarities to the Christ story (i.e. virgins, sacrificial death, etc.).

Legends surrounded real animals as well. Elephants, for example, were exotic animals during the medieval era but appear frequently in bestiaries.  One common belief about them was that the females give birth to their young in water.  Why?  One thirteenth-century source explains: “…because the dragon is of such an ardent nature that it cannot tolerate water, and if the dragon happened upon the young elephants, it would lick them and poison them.”  (Left)  In fact, there was something of a war on between dragons and elephants in the medieval imagination.  Another belief about elephants was that they were distinctly unlustful creatures.  The males were uninterested in sex unless a female elephant fed them a mandrake root (itself a object of legendary qualities).  This belief, obviously, is a retelling of the Adam and Eve story.  It was believed that dragons, once again obviously, must hate elephants because of their natural chasteness and incorruptibility.  Just as the serpent corrupted Adam and Eve, so too dragons must seek to destroy the virtuous elephant - which is exactly what we see in the picture below (though the dragon doesn't seem to be having much success).

Medieval Monsters, as you can see, is full of fascinating information about what people in medieval Europe thought about God, the natural world, and their own place in it.  A brief review can barely do justice to this outstanding volume.  And finally, because I know that many of you came to this post only because you wanted to see awesome pictures of demons and dragons, and instead all I gave you are illustrations of elephants and women with hair disorders, here are images of some random monstrosities from the book.  Enjoy. 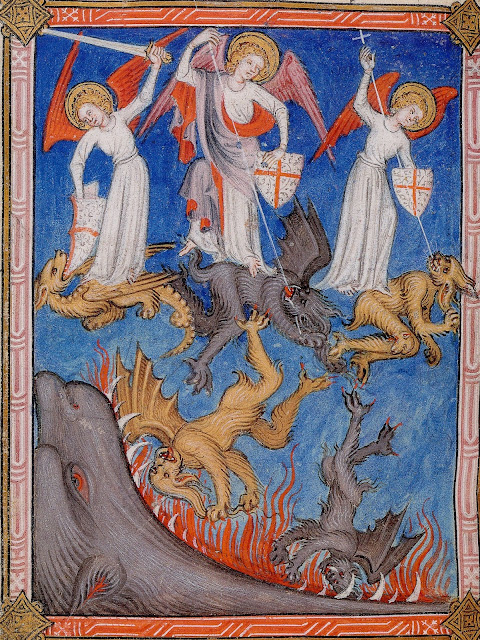 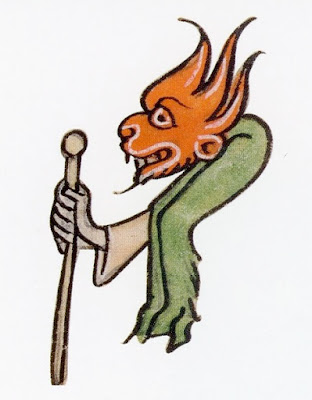 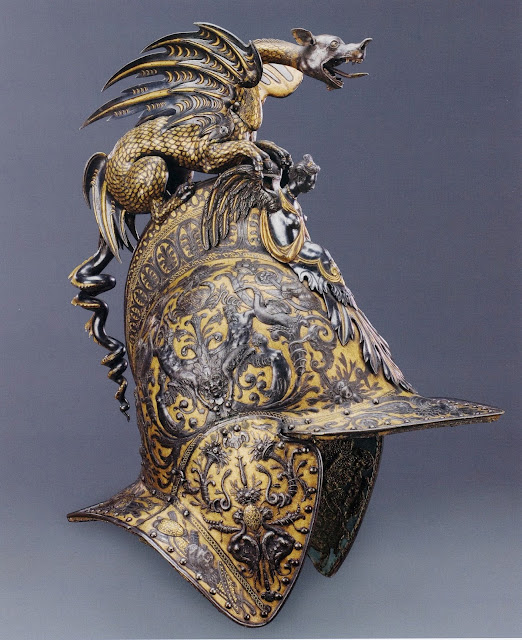 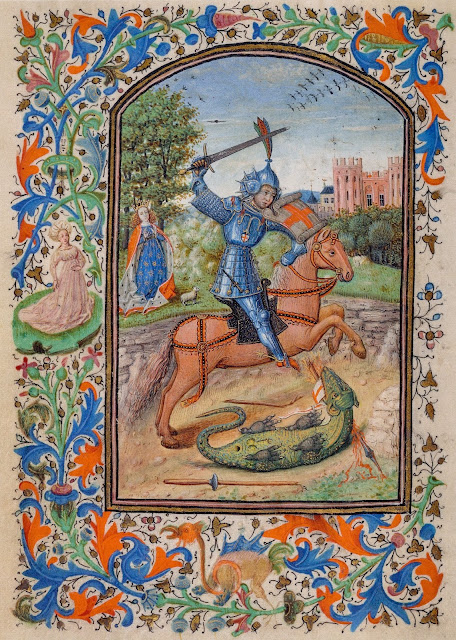 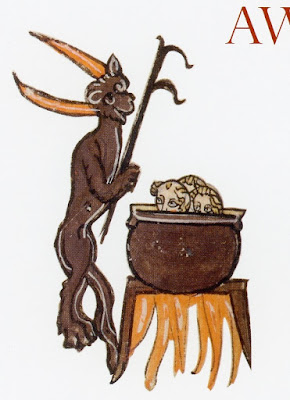 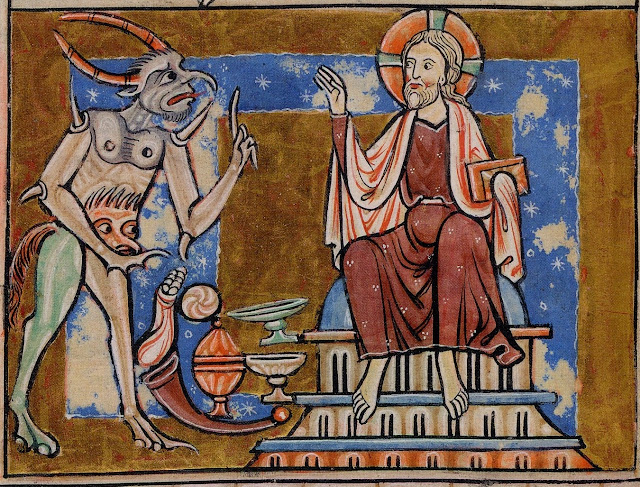