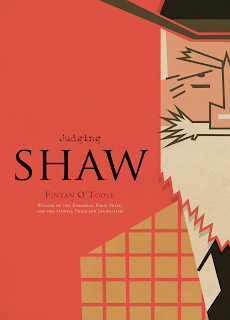 Finished Fintan O’Toole’s Judging Shaw: The Radicalism of GBS.  It’s very good - informative, well-written, thought-provoking.  O’Toole is obviously the ideal person to write a book on George Bernard Shaw.  Like his subject, he is Irish.  Currently a columnist for The Irish Times and a regular contributor to The New York Review of Books, O’Toole, like Shaw, began his career as a theater critic.  Over time he has begun writing on politics and economics.  His book Ship of Fools is an excellent account of the collapse of the Irish economy in the wake of the 2008 recession, and his weekly column in The Irish Times  (subscription required) makes O’Toole one of the few political commentators who deserve to be read on a global basis.

O'Toole is also a deep and committed Shavian, and he moves with ease through Shaw's body of work, which is immense, and the end result is a book which serves as both an excellent introduction to GBS and as an entertaining and insightful one to those with long familiarity with his work.  O’Toole’s goal is to “reintroduce” Shaw to a new generation of readers, to “restore” him to the twenty-first century.  He dedicates the book to his father and writes in the introduction:

To my father, a self-educated bus conductor, Shaw was a pure delight.  He was the big, sharp, shiny pin pricking the pretensions of church and state, of bosses and bishops.  He was, moreover, an ally.  Shaw was not, to men like my father, a guru to follow.  He was a kind of older, smarter, intellectual big brother, a pathfinder who had opened the way to the rough but exhilarating terrain of thinking for yourself.

And that, I believe, captures Shaw’s ongoing appeal and significance.  After reading him your thinking is sharper, your mind less cluttered; you’re a little more on guard against the cant and hypocrisy which surround you.  It’s a bracing and clarifying experience.  Shaw’s critics usually deride him as being “all brain” (and let me add that if one is going to be "all" of any body part, the brain is probably the best part to be), not recognizing that that quality is precisely what makes him such an attractive author.  And it also helps that he was one of the best writers of English prose who ever lived.

Judging Shaw is structured around different aspects of Shaw’s life.  There are chapters on Shaw and poverty, Shaw’s plays, Shaw vs. England, Shaw vs. Ireland, young Shaw’s self-creation as GBS (Shaw vs. reality?), the dark side of his later life (his admiration for Mussolini and Hitler, as well as his adoration of Stalin), etc.  The chapters are fascinating, often focusing on lesser-known but revealing aspects of their topic.

In the chapter on Ireland, for instance, O’Toole focuses on Shaw’s attempt in 1916 to write a defense speech for Roger Casement to deliver at his treason trial.  Casement, whom Shaw knew personally, was an Irish diplomat and nationalist who sought to buy arms from Germany to support the 1916 Easter Uprising in Dublin.  Concerned that Casement and his lawyers would mount the conventional legal defense for him - and thus get him hanged - Shaw wrote Casement a speech for his defense.  Rather than trying to undermine the Crown’s case against him, Shaw’s Casement would argue that he couldn’t have committed treason against Britain because he’s not British, he’s Irish, and thus he can’t commit treason against a country he doesn’t belong to.  If you, the jury, want to ignore that reality and hang me, Casement would have asserted, go right ahead.  “I am not trying to shirk the British scaffold:” Shaw wrote for him to say, “it is the alter on which Irish saints have been canonized for centuries.”  Fearing the creation of yet another martyr to Irish independence, the jury might - just might - have spared Casement’s life.  When she heard of Shaw’s efforts to turn Casement’s trial into “a national dramatic event,” his Fabian colleague Beatrice Webb was disgusted.  She fumed in her diary: “His conceit is monstrous.”  In the end, Casement ignored Shaw’s advice, mounted the conventional defense, and was duly hanged. 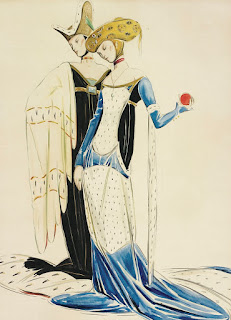 This book is also very physically attractive.  Each chapter ends with several pages of images - photos of Shaw, postcards, production notes, costume designs (like the the ones for Saint Joan on the right), facsimiles of letters, posters, etc.  It is a treasure trove of Shaviana.

But what of O’Toole’s stated goal of reviving Shaw for a new generation?  Does he pull it off?  Frankly, I’m always skeptical about such efforts.  An artist’s work either strikes a chord with later generations or it doesn’t.  Normally when one has to “make a case” for an author it’s because they’re a lost cause.  The common reader has abandoned them.  That’s not the case with Shaw.  It’s been said of Verdi that there’s not a moment of the day in which his music is not being performed or broadcast or listened to.  Well it’s probably safe to say that not a weekend passes without a play by Bernard Shaw opening somewhere.  The chances of him being forgotten are currently nil, but barring a sudden resurgence of interest in him due to Hollywood intervention (George Bernard Shaw: Zombie Killer!) I doubt that the appeal of his work will grow much larger.

O’Toole can be confident that the case he makes for Shaw is a solid and sturdy one, but GBS may very well be a lost cause.  It’s unlikely that he could ever regain the status which he had for O’Toole’s father or for O’Toole himself.  We simply know too much about him.  His admiration for the twentieth century’s biggest monsters is disqualifying.  Shaw's reverence for Joseph Stalin was so deep that, before his death in 1950 at age ninety-four, he kept a portrait of the Soviet leader on his bedside table (right next to a portrait of Gandhi - go figure).  When the man who shows one “the rough but exhilarating terrain of thinking for yourself” winds up as a Stalinist apologist one can’t help but question the value of everything he’s said before.  It puts him under suspicion.  And he obviously forfeits the mantle of a sage.  All of which means that Shaw’s non-theatrical works will continue to be read by a devoted few (and Fintan and I will be among them), but he now belongs with those other artists and writers whose horrible political choices make them a problem: Ezra Pound, Richard Wagner, Martin Heidegger, Jean-Paul Sartre, etc.  Still, this is an outstanding volume on Shaw, and O'Toole is to be commended for bringing much fresh and lively material and analysis to his subject.

And finally, since no review of a book about Bernard Shaw is really complete unless it contains a sample of his writing, I can't help but include a quote from him.  As is well known, Shaw was one of the founders of the Fabian Society.  They were socialists who rejected revolution and violence as the way to overthrow capitalism, preferring instead the method of peaceful and legal reform.  Naturally this attitude filled many a Marxist with flaming contempt.  This wasn’t socialism.  Where’s the violent revolution!?  Don’t these English mamby-pambies understand that the immutable laws of history (thank you, Karl) require an apocalyptic confrontation between the capitalists and the proletariat?  There will be blood!  There must be!  The orthodox Marxists sneered at Shaw.  Fortunately, he sneered back and he could sneer better (he was, after all, Irish).  In the preface to the 1907 German edition of his The Perfect Wagnerite, Shaw, who had held elected office in Britain for several years, tells us his response when confronted by the Marxist faithful:

All they want to know is; Am I orthodox?  Am I correct in my revolutionary views?  Am I reverent to the revolutionary authorities?  Because I am a genuine freethinker they look at me as a policeman looks at a midnight prowler...They ask 'Do you believe that Marx was omniscient and infallible; that Engels was his prophet'...Hastening in my innocence to clear myself of what I regard as an accusation of credulity and ignorance, I assure them earnestly that I know ten times as much of economics and a hundred times as much of practical administration as Marx did; that I knew Engels personally and rather liked him as a witty and amiable old 1848 veteran who despised modern Socialism…that I read [Marx’s] Das Kapital in the year 1882 or thereabouts and still consider it one of the most important books of the nineteenth century because of its power of changing the minds who read it, in spite of its unsound capitalist economics, its parade of quotations from books which the author had either not read or not understood, its affectation of algebraic formulas, and its general attempt to disguise a masterpiece of propagandist journalism and prophetic invective as a drily scientific treatise of the sort that used to impose on people in 1860, when any book that pretended to be scientific was accepted as a Bible.

Posted by Andy Nicastro at 6:35 AM