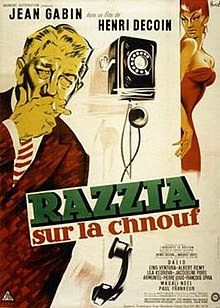 If you were to compile a list of the coolest movie stars who ever lived, there is little doubt in my mind that Jean Gabin would be in the top ten, if not the top five.  And if you wanted a film to justify that claim you could scarcely do better than Henri Decoin’s fantastic Razzia sur la Chnouf (Drug Raid) from 1955, recently released on DVD/Blu-Ray by KL Studio Classics.  It will also be part of the Film Noir Foundation's Noir City 2020 line-up which will be touring the country during the year.  See the schedule for details.

In Razzia (as it was called in the US) Gabin plays Henri Ferré, a gangster returning to France after a successful stay in the US.  Crime boss Paul Liski (Marcel Dalio) has a special project for him.  The heroin business in Paris isn’t doing as well as it should, and Liski believes that Ferré is just the right son-of-a-bitch to break heads and increase his profits.  To that end he assigns him two hit men (Lino Ventura and Albert Rémy) to help motivate those in the racket who aren’t keen on the new requirements.  Ferré also gets a nightclub to manage (it’s a good cover for him, too).  There he starts up a love affair with the young cashier, Lisette (Magali Noël).

A title card at the beginning of Razzia tells us that this film was made to educate the public about the evil of drugs and to dissuade the viewer from ever getting involved with them.  Now, anytime a film begins with that type of earnest disclaimer you can bet that the crimes/sins/evils we’re about to see will be depicted in the most flattering, appealing, and irresistibly enjoyable ways - and you would be right.  Razzia is a delight.  The world of crime in it is cool, romantic, exciting.  It probably won’t make you join the French heroin business, but you’ll sure want to dress and act like you're part of it.

And at the center of it all is Jean Gabin.  This is a stolid and stoic performance.  The less Gabin moves and speaks the more compelling he is to watch.  It’s like there’s a gravitational field of cool around him.  He's Bogart-esque.  At one point he catches a waiter (Robert Le Fort) trying to steal food from his nightclub.  He slaps the man across the face (he does a lot of slapping in this movie) and sends him back into the kitchen to return the food.  The waiter comes back out and apologizes, explaining that he's broke from a 14,000 franc gambling debt.  Gabin, who's barely moved since he smacked the fellow, calmly pulls out a wad of cash and gives him 10,000 francs.  So smooth.

Gabin had been the top French movie star during the 30s and 40s but with the coming of World War II he emigrated to the US, where he hoped to start up a Hollywood career.  Instead, he encountered total failure.  He made only two films in the US and both bombed.  He just didn’t catch on with American audiences.  When he returned to France after the war he wound up having trouble catching on with French audiences as well.  His career was floundering.  But in 1954 he starred as an aging, tired, weary gangster in Jacques Becker’s Touchez Pas au Grisbi.  It was a huge success and Gabin was a star once again.  Life, failure, and the passage of years had kicked the shit out of him, and that gorgeous face was now lined and furrowed and grizzled and wounded.  In other words, it was the perfect face to play a gangster, which he would do for much of his remaining career.  He would play cops, too, because, per the unwritten rule of gangster film casting, if you have the face to play a criminal, you have the face to play a cop.

Words and a few stills cannot capture the pure visual gorgeousness of Razzia.  This film is opulent and lush - sensuous, even.  It's hard to overestimate just how visually beautiful French films of the 1950s were.  Francois Truffaut may have railed against the stifling "tradition of quality" in the French film industry of that time, but sixty years later I find it hard to agree with him.  Decoin, cinematographer Pierre Montazel (who also shot Touchez Pas au Grisbi), and the production team led by Paul Temps have created a feast for the eyes in Razzia.  When Gabin takes the lovely Noël to his apartment to sleep with her all we see at first is a completely darkened room, except for a window with some outside light.  Then the door opens.  The two of them enter, silhouetted by the hallway light.  It's only a brief moment but it's poetic and evocative.  Yes, this is exactly what taking a new girl home to bed feels like - or should (for both parties).  At another point Gabin visits the lab where the heroin is processed.  It's a small room but when he enters we see the immense shadow of a slowly rotating fan completely fill the space.  This film has dozens of visually breath-taking moments like those.  Honestly, Razzia is so sumptuous on the eyes that if it were publicly acceptable to drool at the movies, I'd need to wear a bib when I watch this one.

And now that we're on the topic of cinéphiles and drooling, one week after Razzia opened in France, Jules Dassin's equally brilliant Rififi (arguably the best heist film ever made) had its premier.  Yes, April 1955 was a good month for Parisian film-goers.  Both movies, by the way, are based on novels by Auguste Le Breton.  Without Le Breton French crime films would be short of many a gem.  He would later go on to pen The Sicilian Clan, and a year after Razzia he helped Jean-Pierre Melville adapt Bob le Flambeur for the big screen. Le Breton had been a petty criminal in his youth and no doubt much of the docunoir detail about the distribution of heroin in Razzia is based on solid second-hand, or maybe even first-hand, knowledge.  Le Breton even has a brief cameo in Razzia as one of the patrons at Gabin's nightclub.

The rest of the cast in Razzia hold their own with Gabin.  It's a delight for fans of French film to see him paired again with Marcel Dalio.  The two had co-starred back in the '30s in Jean Renoir's Grande Illusion and Julien Duvivier's Pépé le Moko; both classics.  Dalio also went to Hollywood during WWII, but he had more success than Gabin.  And, yes, you have seen him onscreen; he played Emil the croupier in Casablanca.  Magali Noël is completely fetching as Lisette.  Her striking face would subsequently enchant Fellini, who featured her in many of his later films (which, frankly, were little more than testaments to their creator’s endless fascination with faces).  Lino Ventura and Albert Rémy bring a cold malevolence to their roles as hitmen.  There are more than a few times when one wonders if they’ve actually shown up to whack Gabin.  I’ll watch anything with Lino Ventura in it anyway.  From the time I first saw him in Melville’s Army of Shadows I’ve found him one of the great underappreciated actors in French films (at least outside of France).  I love his quiet, easy toughness, his total unflappability.  He’s got the face of a man who’s see it all and is yet totally centered and at peace with the evil world around him.  Razzia was only Ventura's second film (his first was, you guessed it, Touchez Pas au Grisbi), and Gabin viewed him as something of a cinematic successor to himself.  If only...  The French film-going public, it turns out, had different ideas, and the next big male movie stars in France would be Jean-Paul Belmondo and Alain Delon.  Which wasn't so bad after all.

Posted by Andy Nicastro at 6:08 AM