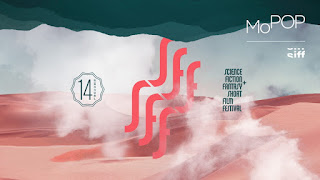 Saturday afternoon was the 14th annual Science Fiction and Fantasy Short Film Festival at the Egyptian theater in Capitol Hill.  This is a joint venture of SIFF and MoPOP.  Now, this festival may sound like fun - and it's true that every year it sells out - but, frankly, it is not.  In fact, it's brutal: sixteen films spread out over five hours with a sixty minute intermission.  Only a handful of these films are any good; the majority of them are dreadful.  It's a marathon of mediocrity.  And that hour intermission doesn't help, either; it should have been fifteen minutes.  In fact, there should not be an intermission.  There should be only two hours of movies, not four.  And if we narrowed it down to the movies that weren't dreck, we would have been in and out in about forty minutes.  Still, a handful of films were noteworthy. 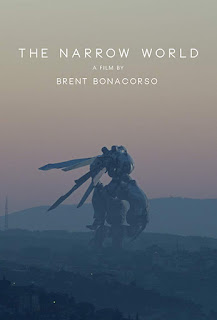 In The Narrow World a gigantic alien craft lands in Los Angeles.  He hasn’t come to destroy us, or to warn us, or to even communicate with us.  In fact, he doesn’t do anything at all.  He’s a bit of a bum.  Immense and possessing insect-like wings, he goes to the beach in the mornings, and then goes to watch the airplanes take off and land at LAX in the afternoon.  That’s it.  (Maybe he’s here for the weed?)  The cinematography of him wandering around LA county is magnificent.  The Narrow World is in the mock-documentary mode, and two scientists - a man and woman - separately appear on screen, each attempting to explain the alien to us.  Apparently his complete indifference to humanity has greatly demoralized the earth’s population.  We just don’t matter to him - and that kind of hurts.  So far, so good.  In fact, very good.  The fifteen-minute film should have ended there.  But it didn’t (and here come the spoilers).  It turns out that the alien craft doesn’t really exist.  Those two scientists are actually lovers, and they’re going through a hard patch.  The alien is a metaphor for the man’s inability to communicate with his woman.  But the lady isn’t giving up on him.  She’s committed to break through and save the relationship.  End of film.  I sigh with disappointment.

From Norway comes The Restrictor.  In a society in which happiness is given out in monthly liquid doses, those who overuse it, or abuse the rules (no sharing of your allotment) are subject to punishment.  A nicely crafted film by Jade Aksnes.  Well-acted.  Good premise.  A bad guy you hate.  One may chuckle at the idea that a society in which people aren’t allowed to be too happy sounds like Norway today rather than in the future, but nonetheless this is a memorable and involving movie.


From Yves Paradis (wonderful name, let me add) comes the animated short M52, which was improvised over the course of a year, a new segment added each week.  There's not much of a story in it.  A figure pushes around a block in a strange landscape, another figure appears, they take some green pills, a tree grows, people have tea in the jungle with animals.  It all may be short on coherence, but you don’t care.  Paradis keeps you interested.  A strange but compelling ten minutes, as you can sense from the trailer above.  In all honesty I think it's best to watch this film when you’re stoned.

Also enjoyable is J. P. Chan's brief Cosmic Dental Associates of Clifton, NJ.  It’s a fake TV commercial about the fabulous astro-dental services available at this imaginary clinic.  If you have a comet flying around in your mouth, or remnants of the Crab Nebula are lighting up your teeth, then Cosmic Dental Associates can fix it.  Doctors and patients give their testimonials ("We treat you like family.").  Very funny and clever.

But the best film in the festival was Brian and Charles.  Like The Narrow World, this is also a mock documentary.  Brian is a lonely sheep farmer living in Britain and one winter when he was feeling very down indeed he built his own robot, Charles.  Charles is the strangest, most shoddy-looking robot you've ever seen.  His head is not quite aligned with his torso, his arms seem to be on different planes, he's balding.  And his personality isn't particularly sparkling either.  He's a bit daft.  But none of this matters to Brian.  Charles is soon his best mate.  The friendship starts to break apart - over, of all things, cabbages - but the two are reconciled in the end.  As we all know, relationships, even with robots, take work.  This movie, directed by Jim Archer, is hilarious and yet weirdly poignant.  It's like Of Mice and Men but with a happy ending and a robot and set in England and with cabbages instead of rabbits (so in many ways, as you can see, it's much much better than Of Mice and Men).  It stars David Earl as Brian and Chris Hayward as Charles.  The two men are also given the writing credits, which makes me think that this film was probably improvised by them.  It is inspiredly goofy, and, luckily, you can watch the whole thing below.

Posted by Andy Nicastro at 7:01 AM