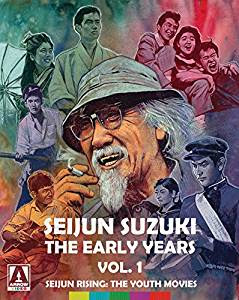 On the second disc of Arrow Video’s new release of early Seijun Suzuki movies we go back to the Japan of the 1910s and 1920s, a time known as the Taishō period (1912 - 1926).  Apparently teens were brimful of angst back then too.  This was also the era into which Suzuki himself was born and it would serve as the backdrop of his later highly-acclaimed Taishō Trilogy, consisting of Zigeunerweisen (1980),  Kagero-za (1981), and Yumeji (1991).  Before settling into the reviews of the films at hand, though, let me commend the outstanding film commentary and essay by Jasper Short which accompany this set, as well as the discussion of the films by Tony Rayns.

The Incorrigible (1963)
Akutarô, which is this film’s original Japanese title, is a difficult word to translate.  Some translators use “bastard,” others go with “bad boy.”  But regardless of which you choose the incorrigible bad boy bastard of the title is Tôgo Konno, a teenager whose misbehavior - he’s already been kicked out of one school - has led his mother to pack him off to a harsh military academy out in the provinces.  The insouciant and rebellious Tôgo hates it.  He skips classes and gets into fights with school’s sadistic upperclassmen who've formed themselves into a "Public Morals Committee" which does little more than bully all the underclassmen in the school.  But he also meets Emiko, the beautiful daughter of the town’s doctor.  They fall in love and it’s their passionate and doomed love affair which constitutes the heart of the story.

A masterpiece.  From the opening credits, in which the camera slowly pans over drawings of old Japan while the lush score - complete with sad mandolin solos - plays in the background, it’s apparent that Suzuki has kicked it up several notches.  This is a film with ambition.  He’s making a play for all the marbles - and he’s going to get them.  Although The Incorrigible is only ninety-five minutes long, it has the richness and depth (though not the drag) of some three-hour saga from Bertolucci or Coppola.  Like those other two directors, Suzuki doesn’t just show a world on screen, he creates it, pulls us in, and doesn’t let go until the final shot.  There is scarcely a single component of the film which doesn't add to its power.  Is the story a tad clichéd, or even vapid?  Yes.  But a feeble story (Gone With the Wind, How Green Was My Valley, etc.) is no bar to great film-making.  With The Incorrigible, Suzuki broke out of the B unit and established himself as a significant director in Japanese movies.

Ken Yamauchi is very good as Tôgo.  Despite being almost thirty years old when the film was made, he beautifully captures the teen’s moodiness.  One minute he’s full of smug and self-satisfied arrogance, the next he collapses into helpless confusion.  Masako Izumi plays nicely opposite him as Emiko.  But the most memorable performance in the film is by Chiharu Kuri as Ponta, the geisha who deflowers Tôgo.  Kuri’s performance is wonderful - all smiles, pouts, and coos; blatantly fake, almost doll-like.  Yet through it all she conveys Ponta’s weariness and contempt for her customers.  Her most sincere moments are when she’s rushing her client to the bed to get it all over with.  Both films on this disc are sexual coming-of-age stories and Japanese censors allowed much more candor and honesty than their American counterparts.  The cinematography of Shigeyoshi Mine is magnificent and this film is the first time that art director Takeo Kimura worked with Suzuki.  Kimura became Suzuki’s default art director and is as responsible for the unique look of Suzuki’s films as any other single production member.

The story is based on a quasi-autobiographical tale by Tôkô Kon, himself a fascinating figure largely unknown outside of Japan.  Born in 1898, he served as a personal assistant to Junichiro Tanizaka, author of the classic The Makioka Sisters.  In the mid-20s Kon began to publish his own short stories and joined the literary modernist group known as the “New Perceptionalists.”  After a falling out with the other members of the group he then joined the left-wing “Proletarian Film League of Japan,” a collective which made independent films championing workers’ rights.  He served as the organization’s chair but left-wing infighting would drive him from the group (when does it not).  In 1930 he abandoned writing completely and became a Buddhist monk.  Twenty-six years later he took up his pen again.  The Incorrigible and Born Under Crossed Stars are both based on stories he wrote at this period.  In fact, he had a great deal of success with his work onscreen - one novel was adapted into a period film, another into a yakuza serial.  In 1966 Kon became High Priest of the Tendai sect, and two years later was elected to the upper house of the Japanese parliament.  He died in 1977.  How this guy's life isn't a biopic, I can’t figure out.  (Or maybe it is and I just never heard of it.)

Born Under Crossed Stars (1965)
An entertaining, if eccentric, film.  It's not quite a sequel to the The Incorrigible but rather a follow-up, or even a remake.  The two leading actors are the same, the director is the same, so is the art director, it’s set in the same time period, it’s the same author of the original source material.  And it’s roughly the same dramatic premise.  A teen boy, Jukichi (Ken Yamauchi, again), must deal with problems at school and learn to navigate his relations with the opposite sex, represented in this film by the pure but distant Suzuko (Misako Izumi, again, too) and the coquettish but loving (and very horny) Taneko (Yumiko Nogawa).

Aside from these commonalities both films are very different.  The Incorrigible is naturalistic, literary, uniform in style, and very much aware of its own significance. Born Under Crossed Stars is almost the exact opposite.  It's brash.  And at times surreal.  It’s full of comedy, much of it low, some of it funny.  Unlike the aristocratic Tôgo in the first film, Jukichi is a farmer’s son who earns his living delivering milk to the town’s inhabitants.  Fights break out over milk deliveries, and characters insult each other with lines such as “You’re not good enough to drink our milk!”  The owner of the farm where Jukichi works wears a cowboy hat and keeps telling him to do things “the Texas way.”  The jokes are broad and the comedy often slapstick.

Stylistically Born Under Crossed Stars is flamboyant, playful, at time even wild.  In other words, it’s Suzuki’s mature film style (at least for his Nikkatsu years).  When a bunch of boys at the school are fighting, for instance, he cut to shots of cocks fighting in a farm yard.  Later Taneko strips naked in front of Jukichi in a room at a bath house.  The camera pans from her face, down to her breasts (which she’s covering with her arm), but as the camera approaches her loins Suzuki suddenly cuts away to the image of a branching tree trunk with a big pubic-looking patch of moss where the boughs connect.  Then the camera quickly zooms out and we see that the tree trunk is one of the items in the bath house where the two lovers are together.  Early in the film Jukichi tells a mother that she needs to feed her child milk, he's so malnourished he looks like a monkey.  She looks over and we see a monkey wrapped up in swaddling clothes.

Watching this film I couldn't escape the impression that Born Under Crossed Stars is on some level a parody of The Incorrigible, as if Suzuki was gently mocking his earlier film.  In The Incorrigible the two lovers are brought together over August Strindberg’s novel The Red Room.  Tôgo sees Emiko buy it from a bookstore so he gets a copy.  When they meet later, they discuss it.  Love blooms.  Emiko will write in his copy that she hates Strindberg’s book but loves that it brought them together. In Born Under Crossed Stars Tolstoy’s Anna Karenina plays a similar role, expect this time in a comical vein.  Both Suzuko and Jukichi are reading the novel, and when she finds out that Jukichi has cheated on her she tearfully yells at him that people who read Tolstoy just don’t do those sorts of things - which, of course, they do.  And anyone who's reading Anna Karenina, a novel about adultery, should know that.

The three principals put in excellent performances but the two female leads outshine their male counterpart.  Ken Yamauchi's best efforts can't change the fact that Jukichi is a bore, uninteresting, unmemorable.  Although she has less screen time in this film than in The Incorrigible, Misako Izumi's performance is more noteworthy here.  I'm tempted to call it enchanting if not enchanted.  There's something neurotic and overwhelming in Suzuko's love for Jukichi.  It's too big, no human being could live up to it, and she haunts the film with a nervous vulnerability which is compelling to view.  The scene in which the two separate - in a mist-shrouded bamboo grove - is unforgettably surreal.  Yumiko Nagawa's Taneko, on the other hand, is as down-to-earth and practical as one could wish.  No wraith-like hauntings of the woods for her, thank you very much.  Lively, passionate, jealous, scheming, clever, she's a girl who will get away with everything in life and she knows it.  Yet Nagawa endows her with a great deal of charm and appeal.  We always root for the horny, little imp regardless of her mischief.  The guileless Jukichi is simply no match for her.  Finally, Masao Mishima does a nice job playing the plump, chain-smoking, sake-swilling Buddhist priest who hangs out with town's peasants and winds up providing the film with something approximating a moral - which, with typical Suzuki eccentricity, turns out to be nautical.  "Go to sea," he counsels the confused Jukichi.  And so he does.

Posted by Andy Nicastro at 6:18 AM