Now I Sit Me Down 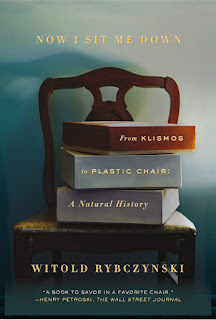 In Now I Sit Me Down: From Klismos to Plastic Chair: A Natural History Witold Rybczynski provides us with a fascinating and entertaining history of the chair.  New chairs, old chairs, comfy ones, nasty ones, Chinese, French, Roman, American - his scope is global.  And his enthusiasm infectious.  If, like me, you treasure books which reveal the amazing background of the everyday objects in our lives, then this wonderful volume is for you.

It turns out that a history of chairs is also a history about power, culture, and our relationship to pleasure.  As far back as ancient Egypt, for instance, chairs were symbols of authority and status.  Important people sat in chairs; commoners had to settle for stools.  Rybczynski reports seeing an Egyptian wall painting at the Metropolitan Museum of Art in New York City in which a carpenter sits on stool while he’s making a chair.  In Medieval Europe this distinction in seating continued.  Commoners sat on stools, benches, upturned pails, etc. but not chairs.  Those are reserved for the privileged.  Much of this had to do with the fact that chairs were - and still are - rather difficult to make.  To create a stable one required the skilled work of carpenters, joiners, and other craftsmen.  They were expensive and not easy to come by.  Hence, symbols of status.

A history of the chair is by definition also a history of sitting.  Before the chair, there was the stool; and before the stool, there was the ground - which is where many cultures (Japanese, Arab) still prefer to sit.  In this debate (chair vs. ground/floor) the Chinese display the most interesting, and in many ways the most significant, cultural development.

Like other Asian cultures, the Chinese began by sitting on mats on the ground.  Around the third or fourth century BC, the Chinese invented the kang - an elevated platform which could be heated from below.  Kangs would often extend along an entire wall of a room and were used for sleeping as well as sitting.  In fact, they’re still in use in China.  In the second century AD the folding stool (hu chuang) was introduced to China.  It had the same design as the X-frame stools which the Romans used in their army camps.  Since there was then no Chinese word for “chair” or “stool” they used chuang, which means “bed.” Hu means “barbarian.”  It is believed that the hu chuang was probably an import from the eastern provinces of the Roman Empire.

But it was in the Song dynasty (960-1127 AD) that the Chinese developed their first and most unique chair, specifically the yi (a.k.a. the yokeback side chair).  The yi is a simple side chair with a splat - a piece of wood in the center of the chair’s back - to provide lumbar support.  In China it became the standard chair for centuries.  The word yi is taken from the verb “to lean” and as Rybczynski observes “one sat on a stool, but one leaned back on a chair.”  This shift from utility to comfort - and eventually pleasure - would be a monumental one in chair design.  This change in seating created others in Chinese domestic life.  Tables and desks were now raised to the height of the waist.  Lamps, washstands, and mirrors followed suit.  Even the ceilings in rooms rose to accommodate these changes.  “When the Emperor Huizong commissioned his official portrait,” Rybczynski notes, “he chose to sit not on an elaborate throne but on a yoke back side chair.”

What drove these changes was the great increase in prosperity that China experienced during the Song dynasty.  It was the increase of wealth in Europe which would transform the chair and sitting in the West, too.  As the Middle Ages waned and trade and commerce began to expand so too did the demand for new and improved household goods.  In fact, the demand for chairs was such that in London the association of joiners received their royal charter in 1571; in 1626 the guild of Upholsterers was founded.  But it was France which would take the lead in chair design.  18th-century Europe was enchanted by all things Chinese and the French would soon take the yi and transform it into the cabriole chair.  Curvy, sculptured, upholstered, the cabriole seemed to have its own personality.  Rybczynski writes (paraphrasing the historian Vincent Scully) that “an occupied cabriole chair disappears behind the sitter, but an unoccupied one can seem almost alive.”  But that was just the beginning.  The french produced a plethora of lush, beautiful, richly upholstered chairs - the fauteuil (see image below), the bergère, the voyeuse, and others.  Pleasure was the order of the day, even in sitting.  When asked why she had not entered a covent (as her sisters had done), one of Louis XV’s spinster daughters quipped “It was an armchair that was my undoing.”

The United States, too, played its part in the history of the chair.  Although invented in England, the Windsor chair was phenomenally popular in colonial America.  It’s the chair in which the signers of the Declaration of Independence sat, though when John Turnbull created his famous painting of the event he has them mostly in easy chairs.  These were men of property and leisure, after all, no homey, ordinary, work-a-day Windsor chair for them.  Thomas Jefferson was something of a chair fanatic.  When he returned from his post as ambassador to France he brought back with him fifty-seven French chairs.  And when he wrote the Declaration of Independence he did it in a Windsor chair of his own design.  The seat swiveled while the base remained set.  (Does that guy ever stop being amazing?)  America’s unique contribution to chair history is, of course, the rocking chair, an item still so ubiquitous that I don’t even need to show you a picture of it.  And in US history it was a rocking chair in which Lincoln sat when he was shot in Ford’s Theater.

So, as you can see, this book covers a lot of ground.  I haven’t even dealt with chairs in the modern age.  And I won’t.  I will leave that for you to discover for yourself in this brief, superb book.  Mies van der Rohe, Charles and Ray Eames, Le Corbusier, Michael Thonet, Hans Wegner, Alvar and Aino Aalto, and others bring the chair into the industrial era.  Published in 2016, the book takes the history of the chair into our own times. Illustrated with the author’s own attractive drawings (such as the fauteuil, left), Now I Sit Me Down is an impressive and eye-opening account of an ordinary item with a revealing history.

Posted by Andy Nicastro at 9:02 AM