The Big Bad Fox and Other Tales
A fun and highly entertaining animated children’s movie from France (and coming to Seattle as part of SIFF 2018).  It’s made up of three different stories all set in the same farmyard.  In the first, a lazy stork cajoles a duck, a rabbit, and a pig into dropping off a new baby to a couple in Avignon.  They succeed, but along the way there is much slapstick mayhem.  In the second, a fox, who’s a bit of wimp, steals three eggs from a chicken.  As soon as they hatch, however, the little chicks mistake the tender-hearted fox for their mother, thwarting his culinary designs.  Even worse, they believe that they are foxes, too.  The third tale is a Christmas story involving the duck, the rabbit, and the pig again.  To my mind, it wasn’t as good as the other two, but judging by the happy reaction of the kids in the movie theater, I’m in a minority on this one. 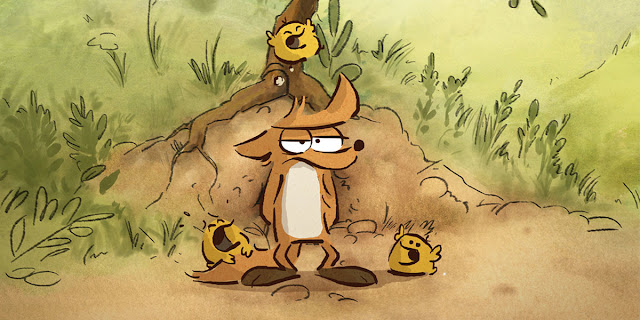 Directed by Patrick Imbert and Benjamin Renner (and based on the latter’s comic book of the same name), The Big Bad Fox and Other Tales is big, cute, wonderful fun.  Check out the trailer below and you’ll see.

Posted by Andy Nicastro at 6:26 AM