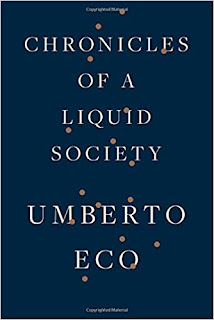 Chronicles of a Liquid Society is a collection of essays by Umberto Eco which originally appeared in the Italian weekly L’Espresso between 2000 and his death in 2016.   They cover a lot of ground: literature, philosophy, cell phones, books, conspiracy theories, general stupidity, and other topics.  It’s an excellent book.  But before getting to that, a few words about me and Umberto Eco.

I’ve always wanted to like the works of Umberto Eco but until this volume I have not succeeded.  I got about half-way through The Name of the Rose and then gave up.  Its cleverness was enchanting and then tiresome.  Years later I tried Kant and the Platypus but it left me cold.  It didn’t seem insightful; Eco appeared to have difficulty getting to the point.  But perhaps I was too young to appreciate it.  Would I think differently now?  Maybe.  Perhaps the point of the book is not to get to the point but rather to explore the terrain and see what you find.  He seems like that kind of an intellectual.  One whose interests are broad and capacious, who cannot be confined to a narrow vision.

To be candid, what I found most appealing about Umberto Eco, what kept me from giving up on him after all those years was his name.  It’s a wonderful name.  I like to say it.  And as with so many Italians names it is a pleasure merely to pronounce it: oom-behr-to-eh-ko.  If he had some prosaic run-of-the-mill name, like Mike Johnson or Todd Smith, I would probably have thrown his works aside without a second thought (or even a first one).  Very unfair, no doubt, but true.
But luckily, this time around Eco and I have hit it off; writer has finally broken through to reader.  The format helped, each essay is only two or three pages long, sometimes briefer.  But it’s the tone of the writing that makes this book so enjoyable.  It’s light and conversational, yet thoughtful, engaging, and unpretentious; if he thinks that the TV show he watched last night is relevant to the topic, he’ll bring it in.  And sometimes the TV show is the topic (how he loves his crime dramas and the Italian version of Big Brother).  He never talks down to the reader.

All of this is a nice change from standard US commentators.  American newspaper columnists are almost always talking at us and not to us.  And if the writer is an intellectual, or has pretensions to being one (David Brooks of The New York Times immediately comes to mind), then, like it or not, we’re in for a lecture/sermon.  Even worse is when they discard the lectern/pulpit and try to address us as “just folks”; then their patronization knows no bounds (“To understand ethics it’s best to begin with the works of Plato, a philosopher who lived in ancient Greece, which is a country and archipelago located in the Mediterranean, itself a large body of water…”)  There is none of this from Eco.  He is a true cosmopolitan.  It’s long been known that the people we call cosmopolitan usually feel at home everywhere except their actual home.  That’s not the case with Eco; he is very much at home in the world.

Here are just a few of the things he covers in this highly entertaining volume. 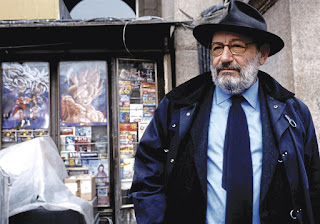 Eco loves books and has much to say about them.  Unlike most commentators he is confident that they are here to stay, and he observes that books are much more durable than electronic media which are always threatened by obsolescence - an obsolescence caused, frankly, by new electronic media.  Anything preserved on VHS is now inaccessible unless you have a VHS player, and even then the tapes got damaged and lost their visual quality after a few rewindings.  But the books you bought at that time are still readable.  DVDs are fine but won’t be much good when the DVD player becomes obsolete.  MP3s are not forever.  A few years ago I had need to get something transferred off 2 inch quad videotape - the type of thing you’d see in those huge metal rollers in the background of TV newsrooms in the 1960s.  After a few calls I learned that there was only one place - that’s right, just one - in the entire United States capable of transferring that tape to modern media.  Electronic media preserve, but they can also entomb.  The book, on the other hand, only preserves.

On the topic of conspiracy theories Eco proposes that we use a “test of silence” to determine their probability.  For instance, if there were solid evidence that the Moon landing was faked, then we need to ask why the Russians didn’t bring it up to discredit the US’s accomplishment.  Their silence rebuts the theory.  And as for alleged conspiracies such as the 9/11-was-an-inside-job one, which, if true, would have required dozens to hundreds of active participants, the collective silence of all the “conspirators” undermines its credibility entirely.  Eco writes:

…if there’s a secret, there’s always a price at which someone will be prepared to reveal it.  A few hundred thousand dollars in publishing rights was enough to persuade a British Army officer to recount all he’d done in bed with Princess Diana, and if he’d done it with the princess’s mother-in-law, it would have been worth double the sum.

And Eco can be quite funny.  After comparing Italy’s Big Brother to earlier popular entertainments like gladiator shows or carnival freaks, he observes:

All things being equal, Big Brother is more respectable, and not just because nobody dies.  The only risk to participants is psychological disturbance - no worse than what led them to take part in the broadcast.

Elsewhere he recounts “the Mafia is such an international phenomenon that several years ago in Moscow, my Russian translator was asked how you say ‘Mafia’ in Italian.”

Eco meets with the Spanish writer Javier Marías and they get onto the topic of publicity.  Why, Eco wonders, are people so obsessed with being on television and with being YouTube sensations?  Even at the cost of great personal embarrassment people want to be famous.  Why this craving to be in the public eye endlessly?  Marías suggests that this is related to the decline in the belief in God.  In the past no matter how lowly or insignificant a person was, there was always the divine spectator who looked over you.  Your life was always before his eyes and was thus always meaningful, always significant.  Eco develops the theme:

Once this all-seeing Witness has gone, has been taken away, what remains?  All that’s left is the eye of society, the eye of the Other, before whom you must reveal yourself so as not to disappear into the black hole of anonymity, into the vortex of oblivion, even at the cost of choosing the role of village idiot who strips down to his underpants and dances on the pub table.  Appearance on the television screen is the only substitute for transcendence, and all in all it’s a satisfying substitute.

Part of what makes Eco’s attitude appealing, I believe, is a mind-set specific to his Italian background.  These newspaper articles chronicle a world in change, the liquid society of the title.  When confronting change, especially technological change, American writers tend to fall into two positions.  One is the angry denunciation, the jeremiad.  This new thing - Internet, TV, video games, Facebook, etc. - is horrible and will destroy America.  It will weaken us, society will fragment and we’ll stop bowling together, darkness will descend upon the land.  The second position is the that the new thing is amazing and awesome and heralds the dawn of a new age of progress and human happiness.  It will transform the world for good.  It's incredible!  And we all better get on board!  As an Italian - and a historically-minded one, too - Eco is unlikely to adopt either of these imbecilic positions.  Over the course of 2,500 years Italians have seen it all - empire, the barbarians, papal rule, kings, fascism, democracy, etc.  They know too much.  They’re not likely to fall for the prophet’s rage or the carnival barker’s promises.  Eco knows that life goes on even after the apocalypse and a great new dawn is usually just the dawn of a great new disillusionment.  Italians have lived through everything and, wisely, have faith in none of these grand pronouncements.  Instead they take the world as they find it and seek their happiness in real and tangible things - family, art, food, sex, and, of course, dolce far niente (the sweetness of doing nothing).

Posted by Andy Nicastro at 5:51 AM