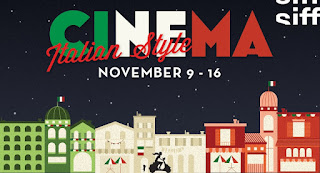 A mob movie, a comedy, and a musical?  Is such a thing even possible?  Yes, it is.  It’s called Love and Bullets and I saw it last night at SIFF’s Cinema Italian Style festival.  But is it good?  No.

After being shot in the ass by a rival gang, Neapolitan mob boss Don Vincenzo (Carlo Buccirosso), at the prompting of his scheming wife, Donna Maria (Claudia Gerini), decides to fake his own death so that he and his spouse can leave Naples and spend the rest of their lives in peace.  In the meantime, his faux death will allow him to be revenged upon his enemies.  He’ll be just like 007 from You Only Live Twice, his movie-addled wife tells him.  Mayhem ensues - underlings break ranks, long-lost lovers are reunited, many bullet-ridden bodies fall, etc.

And, of course, people burst into song.  The word “burst”, though, implies a certain level of energy and that is exactly what the musical numbers in Love and Bullets lack.  They are flat, lifeless, the production values of any randomly chosen 1984 music video put them to shame.  In short, they've got no oomph.  Even in such low-budget musicals as The Rocky Horror Picture Show or A Hard Day’s Night the musical routines are full of punch and vitality.  And if a musical doesn’t have that, it has nothing.  Some of the songs are originals (by Aldo De Scalzi and Pivio), others are re-workings of existing ones with new lyrics, such as “What a Feeling” from Flashdance.  The added lyrics are often clumsy and awkward, although I imagine they may sound better in Italian (what doesn’t?).

The cast does a good job.  Claudia Gerini is very funny as a mob-wife who has seen way too many movies; she steals just about every scene she’s in.  And Serena Rossi, as one of the long-lost lovers, shines - and she can sing, too.  There is no doubt that directors Antonio and Marco Manetti deeply love movies and pop culture; unfortunately, in this film they don’t seem to have learned from them. 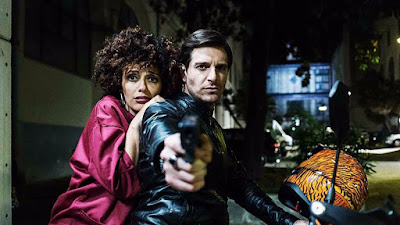 Posted by Andy Nicastro at 7:01 AM