* Here’s the key to Wes Anderson’s aesthetics.  According to the commentary track on the Moonrise Kingdom DVD all the items on the table in the shot below are CGI. 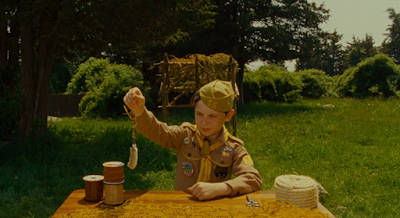 But the tree house in the image below is real (although its supporting cables have been CGIed out). 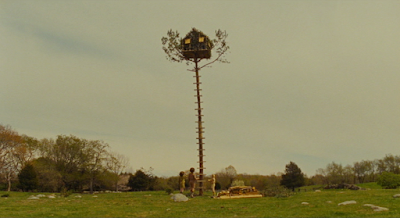 * Anderson’s visual sense is extremely sharp.  All great film-makers are at heart silent film makers.  And I imagine that Anderson would have done very well in the silent era.  I don’t think you could say that about other contemporary directors.  It might take a film or two for Scorsese, Spielberg, Cuaron, etc. to get their footing.  But I imagine that Anderson would glide effortlessly into a cinema of Lang, Murnau, Stroheim, and Dreyer.

Conversely, if movies and their allied arts (TV and comic books) suddenly disappeared I imagine Anderson would find an equally rewarding career as a playwright or novelist.  Once again, I don’t think that could be said of most of his contemporaries (although one imagines Alexander Payne or Paul Thomas Anderson might make good novelists).

* Wes loves the theater.  Like Ingmar Bergman, he views it as a magical place.  Most of the recent movies set in the world of theater - Black Swan or Birdman - have a much more prosaic view of that environment.  In fact, in Birdman the main character’s magical powers turn out to be nothing but his own madness.

* Wes has a thing about animals.  A dog is killed in both The Royal Tenenbaums and Moonrise Kingdom.  A cat is killed in The Grand Budapest Hotel.  Yet he makes outstanding children’s movies featuring animals, such as Fantastic Mr. Fox.  I don't know that this ambivalence actually means anything, I just couldn't help but notice it.

Posted by Andy Nicastro at 5:00 AM