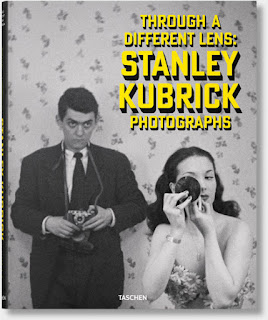 Between the ages of seventeen and twenty-one Stanley Kubrick worked as a photographer for Look magazine.  Look, along with Life, was one of the great photo-journalism magazines in the US and after it shut down in 1971 its five million plus images were donated to the Library of Congress.  Some, though, went to the Museum of the City of New York, where a select few were recently on display in the exhibition Through a Different Lens: Stanley Kubrick Photographs.  This outstanding volume from Taschen is a companion book to the exhibit.

Born and raised in New York City, it is appropriate that Kubrick’s photographs would be displayed by the museum dedicated to his home town.  Since he spent most of his life in England we don’t tend to think of Kubrick as a New Yorker but that’s a mistake.  He always possessed the traits New Yorkers value highly: intelligence, realism, an inexhaustible interest in the world, drive and ambition.  As the cliché would put it - he left New York but New York never left him.  Unlike that other great New-York-born expatriate artist, Henry James, Kubrick never yearned to be English. He wasn't seeking another home elsewhere; he was at home in his interests. Geographic or national identity was of no concern whatsoever to him.  The only time they appear in his work is as caricatures and objects of ridicule in Dr. Strangelove (1964). 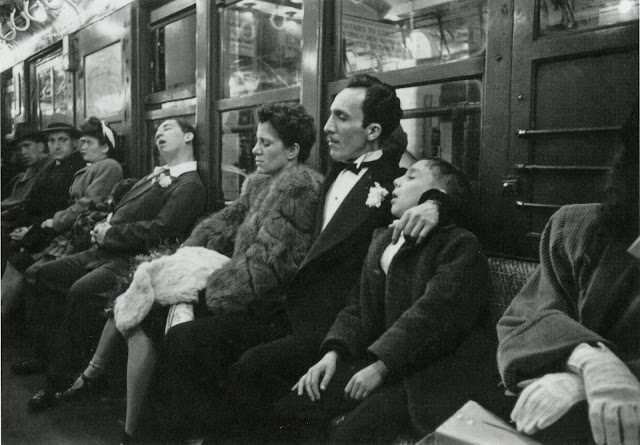 But before he got to that point in his career he worked for Look, chronicling New York City in these outstanding photographs which capture the gritty reality of life in Manhattan in the late 1940s.  Whether it's people riding the subway late at night (above), or people arguing on the streets, or women shopping at a five-and-dime, Kubrick captures the city and its residents in all their toughness.  Weegee (a.k.a. Arthur Fellig) was clearly his idol, and Kubrick too would soon be taking infrared photos of lovers kissing in doorways or darkened movie theaters.

I love these photos.  I love NYC in the 1940s.  It was a world of concrete and never-ending heat waves, short fat guys with bad haircuts wearing T-shirts and chomping cigars, women in cheap print dresses always on the look out for your con. Life was lived outdoors, on the street or the stoop.  It was a ruthless world of hustle and survival.  The face on the kid below, a young shoe-shine boy, is pure New York - tough, yet possessing a humanity and warmth.

Kubrick's vision of New York is pure noir.  In 1956 he directed The Killing, largely regarded as a film noir classic - though I prefer Killer's Kiss from 1955.  It's more raw, more experimental.  The city - with its dance halls, cheap hotels, and boxing matches - is itself a character.  Clearly the years at Look were a preparation for those films.  In the photo of the Copacabana dance floor (below), for instance, you can practically smell the desperation and loneliness. 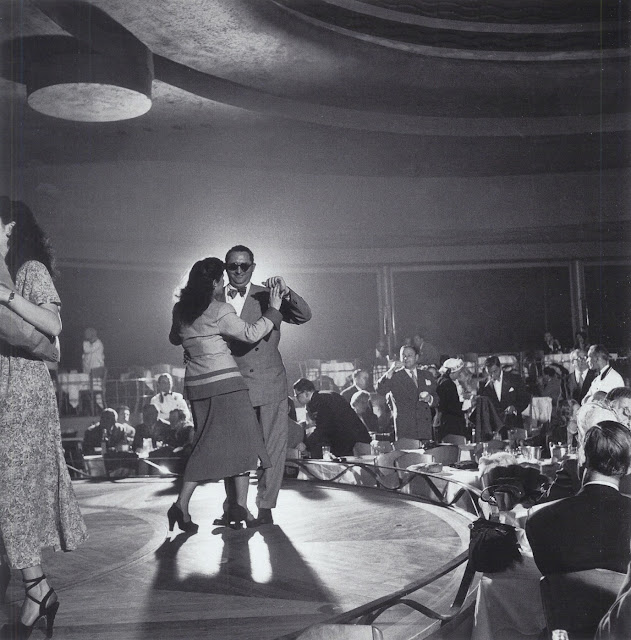 And the showgirls at the Copa seem equally jaded. 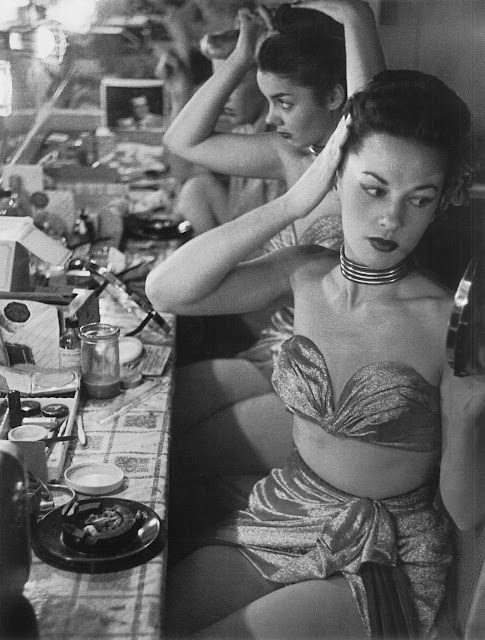 As Kubrick established himself at Look he began to get nominally better assignments.
Often they were of celebrities (Guy Lombardo, Leonard Bernstein, Montgomery Clift) or local New York events (elegant Halloween parties, rehearsals of Broadway musicals).  While you can see Kubrick's visual talent grow over the years, these spreads feel very homogenized.  Each spread was meant to tell a story, but Look was very limited in what stories they wanted to tell.  They had to be tales of hard-work and success, the American Dream come true - or just about to.  Lives that didn't fit into that narrative were ignored.  So Mickey, the shoeshine boy Kubrick photographed (above), never made it into print.  Despite Kubrick's best efforts - photos of Mickey doing his homework or going to the laundromat - the poverty in which Mickey and his eight siblings live undermined the upbeat story Look wanted to tell.  The spread never saw the light of day.  The same thing happened with Kubrick's photos of Rosemary Williams (below), a model and chorus girl he shot in 1949.  We see her making coffee in her apartment, meeting with producer Mike Todd, reading a book, out on the town with friends, and just looking great in that way that only women in the 1940s could.  So did Look run it?  Nope.  A pretty, young single woman in NYC? In a profession that shows a little too much skin to be respectable? Not gonna happen.

It's in the boxing photos that Kubrick is most successful.  And, in a sense, where he began his transition to film-maker.  Here's how the process at Look worked. A photographer was given an assignment or came up with one on his own.  He went out and took the pictures.  When he returned, the editors went over the mass of photos they had at hand - just for the Rosemary Williams assignment, for example, Kubrick had over 700 photos.  The editors selected what they wanted, wrote some text and transformed everything into a spread.  In effect, they created a story-board.  One of Kubrick's best set of photos were of the boxer Walter Cartier in 1949 (below).  In it we see Cartier training in the gym, running through Washington Square park, meeting with his team, and, of course, some magnificent fight photos.  After Kubrick left Look in 1950 his first film was a short documentary for RKO entitled Day of the Fight, in which we spend 24 hours in the life of, who else, boxer Walter Cartier.

Yet even in the boxing assignments it's interesting to see what Look excluded from publication.  A 1950 layout of boxer Rocky Graziano ("He's a Good Boy Now") contains the stereotypical images we've come to expect: Rocky plays with his kid, Rocky meets people, Rocky punches a guy in the ring, etc.  Omitted, though, is the photo below - Graziano naked in the shower.  It's a raw image, full of violence and menace.  Like the subject of a Manet painting, Graziano looks directly at us, his gaze full of challenge.  It's as if he's daring the viewer to see him for who he is - a vulnerable violent man.  His rough and battered face is passive, even sad.  It could be the face of a prison convict.  To my mind what makes this photo so remarkable are the pipes above and behind Graziano; this is not just the picture of a boxer, but of a boxer and his world.  No glamor, no romanticism.  Gone is the upbeat Horatio Alger bullshit of Look magazine.  This is the best photo in the book and it's obvious that Kubrick had already grown beyond the limited worldview of Look.  In fact, one could even say that in this photo we find the first of the lonely, isolated, violent men who would later populate Kubrick's films - Jack D. Ripper, Alex, Barry Lyndon, Jack Torrance, Private Pyle.

Posted by Andy Nicastro at 6:14 AM