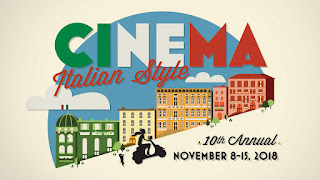 Went to SIFF Uptown Cinema last night to see The Guest (L’ospite), the opening movie in this year’s Cinema Italian Style festival, a week-long showcase of the best in contemporary Italian films.

Set in Rome, The Guest is a gentle and very funny comedy about Guido (Daniele Parisi), a literature professor in his late 30s who gets dumped by his girlfriend and finds himself sleeping on the sofas of various family members and friends, all the while hoping to reunite with his love.  The feckless Guido, though, soon finds himself caught up in the private lives of his many hosts.  Slowly, even reluctantly, he starts to mature.  The Guest is a coming-of-age story about someone who should have come of age about a decade earlier.

But, as Guido and the viewer soon learn, all the other characters in this film should have matured years ago, too, but didn't.  His girlfriend, Chiara (Silvia D'Amico), can't seem to make up her mind about her future; she has a master's degree yet can only find work as a docent.  Guido's colleague at the university is nine-months pregnant but admits to being in love with a man other than her husband.  His mother and father bicker, unable to accept each others quirks after all those years together.  Another friend keeps having multiple affairs with different women.  When one of these relationships blows up in his face, the friend winds up shacking up for the night on the sofa at Guido's parents' house, too.  Everyone's life seems to be a mess.  And Guido, who just wants to move back in with Chiara, finds himself an unwitting confidant and even accomplice to his friends' problems.

It's a testament to director Duccio Chiarini's talent that The Guest doesn't descend into either mere soap opera or overwrought melodrama.  He strikes the right tone; one of sympathy and yet with an amused detachment.  But a detachment rooted in understanding, not indifference.  At one point just about every character in this film turns to Guido and says "I'm scared".  It's always a moving admission, and yet with repetition the line becomes gently humorous.  Yes, you're scared.  We're all scared. Yet one feels that every time Guido hears the line he becomes a little less scared - because he's a little less alone in feeling scared - and thus becomes a little more confident.

Don't let my review leave you with the wrong impression.  Chiarini, and his co-writers Davide Lantieri, Marco Pettenello, and Roan Johnson have created a hilarious comedy in The Guest.  One particular joke about a pair of panties will have you laughing for weeks.  And the excellent cast keep this film lively and engaging.  In the lead, Daniele Parisi manages to be both passive and cranky at the same time.  Almost everyone in this film will call Guido "an asshole" to his face, and yet as the movie goes along his passivity seems to be that of a stoic who's learned (or at least, is learning) to accept people as they are.  In contrast, Silvia D'Amico as his girlfriend is all passion and drive.  She is very discontented.  She wants more out of life, and as viewers we feel that, yes, honestly, she could probably do better than Guido.  But by the end of the film, though, we're not so sure.

Turkish cinematographer Baris Özbiçer did an outstanding job shooting this film; his Rome is a city of color and sunlight, his quiet control puts one in mind of the work of Roger Deakins.  Laura Boni's production design made everything look mundane and yet wonderfully attractive.  After seeing Rome through the eyes of these two, I wanted to run to the airport and buy a one-way ticket there. (When does one not?)

Finally, for any readers who live in the Los Angeles area, your own Cinema Italian Style festival will kick off this Tuesday, November 13th at the Egyptian and Aero theaters.  The film line-up is a little different from Seattle's, but some of the titles will overlap, though, unfortunately, not The Guest.
Posted by Andy Nicastro at 6:35 AM