I try to finish every book I read.  In fact, I don’t regard a book as “read” by me unless I’ve gotten to the very last page.  But in reality that’s not always possible.  Most of the times I agonize over when to give up on a book.  I know the author worked hard on it; I want to make sure I’ve given them a chance.  But other times - and this is one of them (or two of them, actually) - the author manages to drive me away from their book either by poor writing or by being annoying.  That’s the case with the two volumes under consideration here. 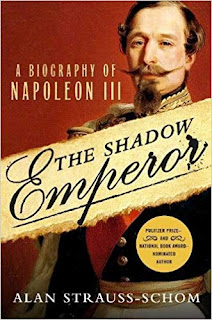 I was very excited to start Alan Strauss-Schom’s The Shadow Emperor: A Biography of Napoléon III (2018).  This nephew of Napoleon Bonaparte ruled France from 1852 to 1870 and ultimately led his country to military defeat at the hands of Bismarck’s Germany.  He has indeed been something of a “shadow” historically, dwarfed by both his uncle and by the other major political figures of his era - Bismarck, Gladstone, Disraeli, Garibaldi, etc.  As the heir to the Napoleonic throne, little Louis Napoléon (his real name) and his mother, Hortense, were subjected to constant police oversight.  All their mail was read.  A grand coalition representing Europe’s major powers oversaw Hortense’s choice of tutors for Louis.  They were routinely kicked out of any country they tried to settle in.  It was a precarious life and Strauss-Schom does a fine job with all of this.

But as Louis grows up Strauss-Schom strikes a new tone in the book.  Hortense, who up to this time appears as a normal aristocratic mother of the day, if a little more protective than most, is suddenly transformed into a domineering maternal bitch.  “Fed on honeyed pap and smothered in cotton wool by an emotional, overly protective, unhealthily possessive doting mother…[sic] her son’s future did not look hopeful.”  But not to worry.  Strauss-Schom assures us “only his [Louis’s] surprisingly strong character and personal will to achieve something worthy of his name, the chalice of empire, to be recognized and respected by the outside world, drove him on with force enough eventually to break away from this strangling silk web.”

“Chalice of empire”?  The minute I read that it hit me “This isn’t a history; it’s a trashy historical novel.”  I had to check and make sure the cover wasn’t embossed.  This is the language a tenth-rate fiction writer would use - as, too, is the cliché of the suffocating mother.  What kind of legitimate historian would use a phrase like “chalice of empire”?  Frankly, I'm not even sure what that means.  How is an empire a chalice?  Is a drinking vessel really the appropriate imperial metaphor?  Could there be a “mug of empire”?  Or maybe a “red Solo cup of empire”?  I don’t know.  I do, though, think that “Chalice of Empire” may actually be the name of a multi-player video game, but I’m not sure.  Clearly, the only way for me to continue reading this book would be to regard it as camp - and that’s not really my thing.  So I close it and I'm done. 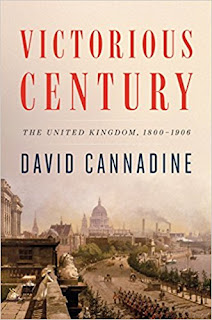 Right from the beginning I sensed that David Cannadine’s Victorious Century: The United Kingdom, 1800-1906 (2018) wasn’t going to make it.  He begins the book with two quotes.  One is Karl Marx’s classic observation from The Eighteenth Brumaire of Louis Bonaparte that human beings make their own history but only under inherited historical conditions.  The other is Charles Dickens's even-more-classic opening from A Tale of Two Cities, “It was best of times, it was the worst of times...”  The Marx quote is bad enough; surely, Cannadine could have found a more original quote in the corpus of Marx’s work than the old chestnut he settled upon.  But the Dickens quote is worse.  The choice of it is trite, lazy, and not even relevant.  Dickens wrote it about the eighteenth century, not the nineteenth century.  So it’s not even á propos to the book at hand.

On the first page of the Preface and Acknowledgements Cannadine writes “I was lucky enough to grow up in what were in many ways the final years of the ‘long’ nineteenth century - namely the 1950s.”  The 1950s?  Really?  On the next page he refers to “the first decade of the twentieth century - the 1960s”  Nine pages later you’ll find this: “In some ways, even today [2017], the British nineteenth century is still not over.”  Cannadine is playing much too fast and loose with his conception of the nineteenth century.  In fact, when your periodization of a “century” covers over 220 years you need to rethink your assumptions.

But intellectual sloppiness seems to be Cannadine’s forte.  To prove that the nineteenth century still is not over in Britain he points to the ongoing existence of photography, nursing, the bicycle, etc. but also matches, football, the old school tie, and bacon and eggs.  In the book’s Prologue (yeah, it’s one of those books with both a preface and a prologue) he writes of the UK that “uniquely among the great nations of the world, its boundaries remained unchanged and unchanging throughout the nineteenth century.”  Yes, that happens when you’re surrounded by water.

But it was a sentence in the opening paragraph of the first chapter which sealed this book’s fate for me.  Here it is: “Accordingly, on the first day of January 1801, Ireland vanished as a separate nation, and the expanded and consolidated United Kingdom that came into being would endure, albeit with misgivings and challenges, disapproval and protest, for the whole of the nineteenth century and on, indeed, until the aftermath of the First World War.”  Ireland wasn’t “a separate nation” before 1801.  Period.  It became a separate nation in 1921.  Until then it was under British rule, directly or indirectly.  That’s the fact.  Just as today no intelligent person would refer to the Palestinians or the Tibetans or the Basque as “a separate nation” so, too, Ireland was not one in 1800.

So why is Cannadine fudging this?  He could have called Ireland “a separate administrative unit” or said that Ireland “legally joined” the UK in 1801, but calling them “a separate nation” is entirely misleading.  Note, too, the cagey way in which he won’t even acknowledge that Irish independence occurred at the end of his chosen historical period.  In fact, the entire sentence from “albeit…” on is one big fustian evasion.  Why should I continue to read this book?  How do I know that what he writes is accurate?  I’d have to read a second book on this topic just to fact check his.  No, no, no.  To the trash with it.

Posted by Andy Nicastro at 6:56 AM