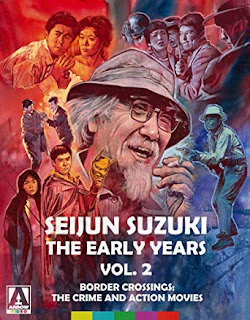 The second disc of Arrow Video's set of early Seijun Suzuki crime and action movies is largely hit or miss.  These films were made during Suzuki's  journeyman years at the Nikkatsu studio and the scripts he was given didn't always provide him with the opportunity to display his talents to the fullest. Nonetheless, there are some noteworthy moments even in the most poorly done of films.  Once again Jasper Short has provided informative commentary for this set (on the first disc), as well as an essay in the illustrated booklet which accompanies the box.  And there's a brief video essay with Tony Raynes putting each of the films into perspective.  I have relied upon both men for much of my information.

Eight Hours of Terror (1957)
A nice taut thriller.  When a typhoon closes down the night-train service to Tokyo a group of people board a rickety old bus to make the overnight journey through the perilous mountain passes.  Along the way the bus is hijacked by two sadistic criminals carrying twenty million yen of stolen money.

As they’re boarding the bus one of the characters says “It’s like a western!”  And so it is.  In fact, it’s John Ford’s 1939 Stagecoach (which is itself, as one critic observed, just Edmund Goulding’s Grand Hotel (1932) on wheels) - throw a bunch of interesting people together in a vehicle and put them through hell.  Hitchcock’s Lifeboat works on the same principle.  And what a colorful, if predictable, crew Suzuki has assembled for us.  There’s the whore with the heart of gold.  The stuffy and obnoxious businessman with his wife.  The lingerie salesman who provides comic relief.  Also, a police officer hand-cuffed to a murderer who's being transported to prison, a pair from the communist-youth league who spout slogans for much of the trip, and a pretty slip of a girl going to Tokyo to break into movies, and others.  The outcasts will of course save the day while the respectable cower in fear.

The two most interesting characters in the film, which were also the best performed, were Sumie, the prostitute, and the killer Kosaku.  Keiko Shima’s prostitute was elegant, savvy, cunning, devoid of innocence but not of decency.  And certainly not of courage.  During a bus stop she lures one of the criminals into the woods and his doom.  I won’t entirely give it away except to note that bear traps can be very nasty.  Later in the film, when the grateful passengers learn that her boyfriend is an African-American GI at a US Army base, they turn on her.  Refusing to be bullied by them, Shima's verbal berating of the group for hypocrisy is full of both dignity and hurt.

Nobuo Kaneko's killer is dark and moody - and ultimately sympathetic.  Apparently it’s not just the whores who have hearts of gold in this movie.  In the course of the film one of the passengers tries to kill herself and her baby.  She is stopped but her baby is harmed.  Kosuku, who turns out to be a doctor, will nurse it back to life.  We also find out that during the war he served in the medical corps.  One day he returned home to find his wife in bed with another man.  In a rage he killed them both. Soldiers serve an interesting role in this film.  Kosaku saved their lives during the war; hence he is sympathetic.  We learn about the black GI whom Sumie loves when someone goes through her purse and sees a photo of him in bed.  Even the soldiers of the occupier and former enemy are used to bring humanity to a character, so unlike the xenophobia on display in the later films on disc one.  At the time Nobuo Kaneko would play other roles in which Japanese film-goers came to grips with the post-war experience.  He was the bed-ridden son and head of the household in 1955’s A Hole of My Own Making, a domestic drama about a family’s disintegration in post-war Japan after their father’s death in the war.

The Man With a Shotgun (1961)
Not good.  Hideaki Nitani plays Ryôji, a loner who goes off into the mountains to hunt.  Along the way, though, he stumbles into a mining town and soon he is embroiled with the town’s outlaws and gun-slingers as well as the scheming boss of a mining company.  And of course the sexy and dangerous madam who runs the saloon/brothel.

A western of sorts.  Fans of Suzuki’s genre-busting tendencies will enjoy this film because it’s something of a gangster movie, too.  The mining company, we discover, is just a front for an opium ring, and one of the outlaws is in fact an undercover cop.  For me, though, the story never quite came together.  Sometimes it’s a comedy, other times it’s an earnest, self-important tale about non-violence.  Mostly it's a muddle.  Parts of the story repeat themselves for no good reason, and the betrayals and alliances among all the characters are a challenge to keep up with (or to care about).  To my mind the most representative moment of this film’s general tenor is when Ryôji gets hurt after a fistfight so he goes to the general store and buys a salonpas patch for his wound.  OK.

Nevertheless, the acting is good in this film.  Hideaki Nitani has the rugged good looks of a cowboy actor (he plays one of the communist youths in Eight Hours of Terror) and Yoko Minamida is fetching as the town’s slinky, sexy, and cunning madam.  And it was shot in the Japanese countryside, which is quite lovely.

Tokyo Knights (1961)
Dissapointing.  Kôji Matsubara (Kôji Wada) returns from school in the US after his father, the head of a successful construction company, dies under mysterious circumstances. The company's No. 2, Mishima (Nobuo Kaneko, again), has taken over the firm and also has plans to marry Kôji's mother (Yoko Minamida, again), who seems scarcely older than her biological son (in reality the actors playing mother and son were separated by only eleven years).  Kôji soon figures out that his father was murdered and sets up revenge.  The problem?  He and classmate Yoriko Tokutake (Mayumi Shimizu) haven fallen in love and it looks like her dad (Zenpai Saga), also in the construction business, is the prime suspect in the murder of Kôji's father.

Although the opening section of this film is very good, once the Hamlet-esque main story takes hold it falls entirely flat.  Tokyo Knights becomes pedestrian, dull.  There are some wonderful visuals, to be sure, but Suzuki doesn't seem to have too much interest in the story.  Kôji takes a long time reaching the conclusion that his father was murdered and when he goes for proof/revenge it's rather disappointing. His vengeance involves putting on a mask and cape, grabbing a rapier, and frightening the so-called bad guys with his Nōh drama inspired ambushes and antics.  It is very silly. Tokyo Knights, like The Man With a Shotgun, seems reluctant to show actual violence.  Why this is so, I don't know.  Guns are brandished but rarely fired, and if a character does get shot it's more the result of accident than intention.  This unwillingness to depict violence creates major problems if you're telling a revenge story (or a western, too, for that matter).  It's not quite satisfying if the bad guys don't come to an appropriately brutal end.  Violence is inherent to the genre; it's Kill Bill, not Seriously Inconvenience Bill.

There are, though, some good things about Tokyo Knights.  The opening scenes, in which Kôji returns to his private school, are very funny.  He's clearly - and comically so - a big man on campus.  For instance, all the clubs want him to join.  No sooner does he join the kendo club than he wins the kendo championship.  So he leaves it and goes off to the polo club.  He becomes champion there too, so he quits to join another club, and so on.  It's all done very briskly and with a light and sunny touch. In fact, the opening scenes have a distinctly Wes Anderson like feel to them.  The other noteworthy part of this film is the actor Zenpai Saga (spoilers ahead) who plays the head of a rival construction firm and is, in fact, the killer of Kôji's father.  What a magnificent face!  But it's more than a face; it's a mug.  If this man wasn't born to play the heavy in B movies, I don't know who was.  He fits this role perfectly, looking exactly like the type of big, vicious bastards who prosper in the construction industry. All the other actors do a fine job but every time Zenpai is onscreen you can feel the malevolence in the air.  It was a delight.

Posted by Andy Nicastro at 7:15 AM