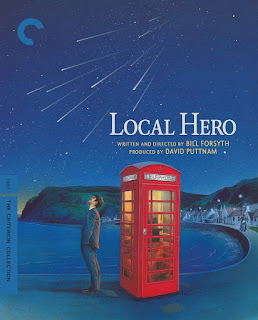 Watched Local Hero this weekend.  So good.  I saw it when it first came out in 1983 but haven’t seen it again in many, many years.  It holds up well after all this time.  Still charming.  Still quirky.  Burt Lancaster still perfect as Felix Happer, the comet-obsessed CEO of an oil company who wants to buy a small Scottish village and turn it into a petroleum processing facility.  Peter Riegert still good as MacIntyre (Mac, for short), the not-entirely-unlikeable yuppie sent to acquire the town, though he’d rather do everything by telex (google it).  And the town and its inhabitants – enchanting and winsome, as always.  Whimsy can sour over the years, but that's not the case with this film.

Bill Forsythe wrote and directed.  To judge by the many extras on this Criterion Collection release, his sensibilities are far more abstract than one would suppose.  He emphasizes several times that he wanted MacIntyre to be as bland and nebulous a person as possible, he didn’t want a strong and domineering leading man.  Mac’s assistant Danny, played by a young and goofy (and pre-Dr. Who) Peter Capaldi has a much more forceful personality.  As Forsythe points out, if Local Hero had been given the typical Hollywood treatment the two characters would have been merged into one.  No doubt.  And Mac would have been a manly type with a love interest (in the actual film Capaldi gets the love interest, not Riegert).  And instead of a charming and eccentric oil millionaire there would have been some unbearable asshole as the heavy (think of the EPA Administrator from Ghostbusters).  And of course our leading man would have put that son-of-a-bitch in his place at the end of the film, and probably become rich and famous in the process.  Then freeze-frame on our victorious hero, cue the rock-n-roll (Journey, Pointer Sisters, Bob Seger, etc.), fade to black, roll the credits.  I think it was federal law that every comedy in '80s had to end this way.

But Local Hero didn’t, and that's one of the many things that made it special.  It wasn’t like all the other dreck playing in 1983.  Here was a unique and idiosyncratic vision.  And underlying it was Forsythe’s total indifference for telling his story the “normal” way.  “Oh, I can’t be bothered with that rubbish,” he seemed to be saying to the viewers’ expectations.  And it was irresistible.  Another filmmaker from that era who shared Forsythe’s contempt for the status quo was Alex Cox, whose equally quirky and unforgettable Repo Man would open a year later.  I’ve always regarded Forsythe and Cox as cinematic brothers.  The former hailing from Scotland, the latter from Britain.  Both outsiders with a rebellious, even punk, sensibility (though Cox was, obviously, more in-your-face about it).  They were independent filmmakers too soon for the indie film breakthrough of the late ‘80s, but much too late for the “New Waves” (French, American, Czeck, etc.) of the late ‘60s and early ‘70s.

From our vantage point it may be hard to recapture some of the freshness which Local Hero had on first release.  For instance, Victor the Russian (Christopher Rozycki).  He shows up to attend the town's party and to check up on his financial investments.  He's a big, boisterous, lovable teddy-bear of a Commie, nothing like the scheming, murderous, Soviet bastards of Reagan-era schlock like Red Dawn (1984) and Rocky IV (1985).  There was something slyly subversive about Forsythe's unwillingness to play along with the rest of the culture's clichés.  Local Hero is also a wry twist on British post-war comedies about Americans.  Had it been made two or three decades earlier (and been subjected to the pro-forma British studio treatment) the film would have been about how a bunch of plucky local Scots foil the plans of greedy Americans to take over their village.  Forsythe inverts that mythos - now the townspeople are more than eager to sell the village for as many millions as they can get.  In one of the films many charming touches one of the townsmen asks MacIntyre for his autograph as the latter is about to leave in a helicopter.  One immediately wonders why.  But, really, why not?  He's made them all rich, he's their hero. 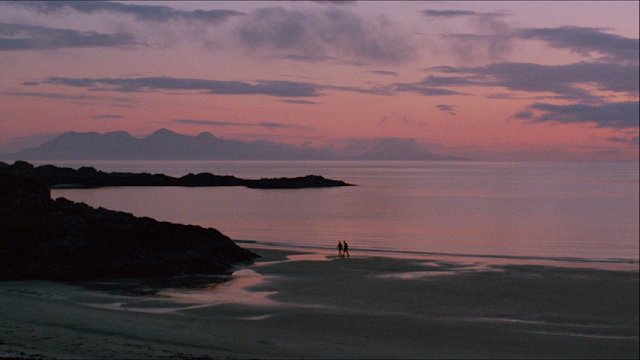 And that's one of the aspects of Local Hero which, to my mind, hasn't aged well.  Its obsession with getting rich is very much representative of its era.  Forty year later that conceit doesn't have the same bright sheen as it once did.  In the intervening decades we've all learned that the folks promising to hand out big bags of money usually end up fleecing and bilking the people they alight upon.  In the early 1980s, at the dawn of what I believe it's safe to call The Golden Age of The Big Con (an age which, you won't be surprised to learn, is still going strong), Local Hero has all the wide-eyed gullibility of a true and perpetual mark.  But this is a minor quibble with the film.  And it turns out that reality had a finer sense of irony than the movie itself.  Two different villages were used to create the town of Furness in Local Hero; one for the beach and one for the town itself.  Both villages are still there, but the one used for the town, Pennan, has created a tourist industry for itself based on the film.  They've barely changed at all; they even kept the red telephone booth on the pier.  It wasn't petroleum which made them money, it was fans of the film.

Local Hero is one of those movies in which the locale is such a strong presence that one feels that it should receive an actual credit along with the actors and crew.  Other films I would also put into this category include Lost in Translation (co-starring Tokyo), To Live and Die in LA (co-starring LA (duh)), and The Sweet Smell of Success with Burt Lancaster and Tony Curtis (co-starring The City and Night).  In Local Hero the Scottish countryside, the sea, and the sky are essentially characters in the story.  They work their magic.  Much of this is due to the magnificent cinematography of Chris Menges, who seems to suffuse each shot with radiance.  I swear he actually captures the atmosphere in the air on this film.  Local Hero was one of the first movies I saw in which I found myself just getting lost in the sheer beauty of the shots, and at several times in the commentary track both Forsythe and his interviewer, Mark Kermode, suddenly fall silent, taken about aback by the beauty of Menges work.  The soundtrack by Dire Straits leader Mark Knopfler has also been justly celebrated.  In fact the music is probably more iconic of Local Hero than any of the film’s images (with the possible exception of the red telephone booth).  And now there is even more Local Hero music.  Last spring the musical version of the film opened in Scotland; music and lyrics by Knopfler, and the book by Bill Forsythe and David Greig.  It opens this summer in London’s Old Vic theater.

Forsythe has characterized this film as "Brigadoon meets Apocalypse Now."  Brigadoon I get, but Apocalypse Now seems like a stretch.  However, both Mac in Local Hero and Willard (Martin Sheen) in Apocalypse Now have similar trajectories in their stories.  Both leave civilization and journey "up the river" into a strange environment (the village/the jungle) which ultimately transforms them - one into madness and murder, the other into possibly becoming a decent human being.  Very different outcomes.  It certainly seems to me that the shot, late in the film, of Happer's helicopter coming out of the sky and landing on the beach is a pretty blatant visual homage to Coppola's film.*

The small things in Local Hero are often the most memorable and moving.  "What lovely long lashes you have," the pretty Stella (Jennifer Black) says to Mac at one point.  And he is completely taken aback, flummoxed.  He sits there speechless, lost.  Later in the film he and Stella's husband, Gordon (Denis Lawson), get plastered.  Gordon is negotiating on behalf of the village and during their drunken discussion Mac mentions that he loves Stella (whom in truth he barely knows) and will want her for himself as part of any final deal.  The moment is both funny and sad, a sign of Mac's deep loneliness.  Speaking of which, there are few things more haunting in 1980s movies than Mac's return to Houston at the end of Local Hero.  In two long hand-held shots we follow him as he enters his apartment, puts down his bags, empties seashells out of his pocket, and pins up some pictures on the wall.  Then he walks onto the balcony.  Night is falling in Houston.  We hear noises from the street.  We see the downtown city lights in the distance, out of focus.  Knopfler's plaintive guitar softly wails.  Then the distant city comes into focus and the image of Mac blurs.  Yet we know there's nothing in that big bright city for him anymore.  It may as well be a million miles away.  But the final shot of the film, which I'll let you discover for yourself, redeems it all.

*  If I really wanted to run wild with this whole Local-Hero-as-Apocalypse-Now theory (and perhaps I shouldn't) it's worth noting that the Scottish film is largely a retelling of the narrative of the American one.  In this fakakta analogy of mine, Mac isn't really Willard, he's actually Kurtz (Marlon Brando).  He's the one who goes upstream and "goes native."  And Happer is actually Willard.  He follows after the rogue agent when things get out of control.  Happer then "terminates" Mac "with extreme prejudice" not by killing him (as Willard will kill Kurtz) but rather by sending him back to Houston (which is also bad).
Posted by Andy Nicastro at 5:50 AM