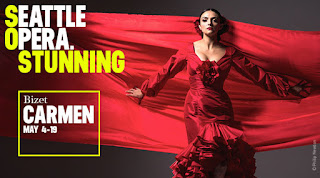 Saturday evening was opening night for the Seattle Opera’s excellent new production of Georges Bizet’s Carmen.  Set in nineteenth century Seville, it tells the story of Don José, a soldier who falls in love with the hot-blooded and dangerous factory-girl of the title.  Once they’re together Carmen easily leads the boy astray.  Soon he abandons the army and they both join up with a group of bandits.  Along the way Carmen hooks up with Escamillo, a bullfighter, and it's with him that she finds true love.  José is soon out of the picture, but not out of the opera, where his murderous jealousy will play out in the finale.  Also in the mix is Micaëla, a sweet, innocent girl (she loves our hero, of course) sent by José’s mother to recall her wayward son to his duty.

Carmen is often billed as a tale of passion and wild sexuality.  It is supposed to have an air of eroticism about it.  Now I don’t doubt that for some viewers the tale of this impudent cigarette-girl may set their libido ablaze.  But frankly the lass does nothing for me.  Perhaps if you were a normal bourgeois male who saw this in 1875 her insouciance and female misbehavior would have provided just the transgressive spark to blast your Victorian-era lust to new heights, but a century and a half later this is tame stuff.  The opera’s original sexual charge seems to be much more centered around issues of class and power than around anything which goes on between the sheets.  As for Carmen herself, her tale doesn’t strike me as especially dissolute: she sleeps around but then meets a guy who wins her heart.  As the pop-song puts it she “fooled around and fell in love.”  No biggie.  In fact our twenty-first century sensibilities are more likely to be offended by the fact that her boyfriend engages in the senseless slaughter of animals rather than in Carmen’s hussy past.

Part of this may be due to Bizet’s music: it’s lovely, memorable, a delight, the tunes are immediately hummable.  Listening to Carmen is the musical equivalent of walking into a candy store.  But the score hasn’t a trace of sensuality in it.  There are none of the vocal and/or orchestral surgings and climaxes that we find in Wagner or Puccini.  In fact Bizet’s music doesn’t even rise to the erotic level of the Barcarolle in Offenbach’s Les Contes d'Hoffmann or the aria Mon coeur s’ouvre à ta voix from Saint-Saën’s Samson et Delilah.  And perhaps that explains Carmen’s longevity; on the surface it seems risqué and naughty, but at its core - in other words, in its music - it’s clean-cut and unthreatening.

And in the SO’s current staging it is also highly entertaining.  Director Paul Curran has wisely focused on the comic aspects of the opera.  The production is bright, colorful, at times even boisterous.  It is a lot of fun.  If there’s a children’s chorus in this opera - and there is - then it will be an adorable bunch of scamps singing and marching around the stage.  If some gypsy gals (or, “Bohemians,” if you prefer) sing a song at the beginning of Act II which has nothing to do with the story, then Curran sets them up before an old style microphone stand and turns the whole thing into a song and dance routine.  Although never camp, one senses that tongue was not unacquainted with cheek in much of this production.  Escamillo the toreador, for instance, enters on a motorcycle and is dressed in jeans, a white T-shirt, and a leather jacket - in other words, he's the Fonz from Happy Days.  As the story turns darker in the second half the staging becomes more sedate but never fails to dazzle.  The sets by Production Designer Gary McCann are vivid and eye-catching, full of bold colors, multiple layers, and diagonals.  His Act III set, which simulates depth of field inside a warehouse, is breath-taking.

Scott Quinn was set to play Don José on opening night but came down with a cold, so instead his place was taken by Frederick Ballentine, who did a fine job in the lead.  Rodion Pogossov’s Escamillo is energetic and lively.  His clowning around during the “Toreador Song” - I believe he steals a move or two from Chuck Berry - fit in nicely with the production's light-hearted tone.  Vanessa Goikoetxea is magnificent in the role of Micaëla.  Her rendition of the Act III aria Je dis, que rien ne m’épouvante - in which Micaëla admits to her own fears in attempting to save José - was deeply moving.  Its vulnerability and beauty really constituted the emotional heart of the drama.  And as for Carmen, Ginger Costa-Jackson is superb in the role.  She has played Carmen many times before and will no doubt continue to do so.  The role seems custom-made for her. Her dark and smokey, yet powerful, mezzo-soprano voice adds just the sultriness the part requires.  Decked out in red for much of the night she dominates the stage not only vocally but physically.  Carmen is only as alluring as the actress who portrays her and Costa-Jackson enchants.

Carmen plays at the Seattle Opera until May 19.
Posted by Andy Nicastro at 6:03 AM