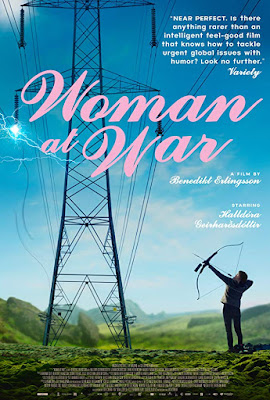 Friday evening was opening night of the 10th annual Nordic Lights Film Festival at SIFF Uptown - a weekend of the best films from Scandinavian countries and islands.  Appropriately, it is co-sponsored by Seattle’s Nordic Museum.

The premiere film of the festival was Woman at War, a winsome and first-rate Icelandic comedy/drama about, of all things, eco-terrorism.  The woman of the title is Halla (Halldóra Geirharðsdóttir), a forty-nine year old music teacher, who wages a one-person war against the industries disfiguring her country and destroying the global environment.  Pictures of Ghandi and Nelson Mandela hang on the wall at her home so her actions are about as non-violent as a terrorist’s actions could be.  The film opens with her out in the Icelandic countryside bringing down power lines using nothing more than a bow and arrow and some wire. Her courage, resourcefulness, and prowess with the bow make her a worthy descendant of her Viking forebearers.  But in the midst of leading this double life, she is notified by an adoption agency that an application she submitted four years earlier has now been processed and there is a young orphan girl, Nika (Margaryta Hilska), waiting for her in the Ukraine.

One of the charms of this film is the effortless and skillful way it juxtaposes the personal and political, the small and the large, the present and the future.  Nika’s mother and father were both killed in the recent fighting in the Ukraine.  Nika went to stay with her Grandmother, but was found alone in the apartment with the grandmother dead.  She has no one.  Inclined to wriggle out of the adoption at first, Halla’s heart melts once she hears Nika’s story and sees a picture of her.  This is a good she can do now.  Halla has a twin sister, Åsa (also played by Geirharðsdóttir), a yoga instructor of deep, if occasionally silly, spirituality.  Her greatest ambition is to secluded herself in an Indian Ashram for a few years and meditate.  “Save one person and you save the world,” she tells her more aggressive twin when she learns about Nika.  We know this touches Halla to the core.

Director Benedikt Erlingsson, along with co-writer Ólafur Egilsson, has fashioned a thoughtful comedy about politics, responsibility, and sacrifice.  In its own way Woman at War even raises that fundamental Philosophy and Ethics 101 question - what course of life is best?  That it doesn’t answer that question definitively is to its credit.  And don’t think for a minute that Woman at War is ever preachy or self-righteous.  No, no, no.  Erlingsson is too smart a director for that.  He tells his tale and lets the viewer find any deeper meanings if they choose.  In fact, my one complaint with this film is Erlinsson's addiction to a goofy joke that, to my mind, soon wears thin.  The film’s music, composed by Davið þór Jónsson, is performed by a trio consisting of drum, piano, and tuba.  It plays in the opening scene when Halla brings down the power lines.  As she makes her getaway, the camera pans with her as she sprints through a field and we see the actual trio there in the background playing the music.  It’s a nice whimsical joke.  But Erlingsson doesn’t let it go.  The trio keep popping up throughout the film - in Halla’s home, standing on the roadside, etc. - every time the music plays.  I found this distracting and ultimately cloying, though, frankly, the rest of the audience never grew tired of it.


Geirharðsdóttir's beautiful leading performance is at the heart of this film.  It's not an easy task to make a terrorist sympathetic.  Most actors can do passion, but political passion, especially to the point of violence, is a whole other beast.  Believability is the issue; most actors are simply not convincing as terrorists, revolutionaries, etc.  (Some of them are scarcely believable as actors.)  But Geirharðsdóttir pulls it off.  We feel her commitment to her cause in every action. When Halla distributes her manifesto, literally throwing copies of it from a rooftop, the Icelandic government soon spins it to their own advantage.  Halla simply stares at the TV in shock, feeling completely powerless and even betrayed by the government's distortion of her message.  At the same time, Geirharðsdóttir manages to convey Halla's innocence in thinking they would do otherwise.  As Åsa, she has created an entirely separate character.  In that strange way of siblings, the sisters are totally different and yet very much the same.  In fact, this is as much a film about the bonds of family as it is about politics.  The beefy Jóhann Sigurðarson was also very good as Sveinbjörn, a farmer who shelters Halla when she's running from the authorities.  From their discussions we learn that they may have a common, and very randy, kinsman from the past; it turns out they may be cousins (or "alleged cousins" as Sveinbjörn puts it).  And, finally, there's the Woman at War's breathtaking cinematography by Bergsteinn Björgúlfsson.  Much of this film takes place in the Icelandic countryside, and Björgúlfsson's sweeping and majestic camerawork does for that landscape what Lucien Ballard did for the American West.

Posted by Andy Nicastro at 6:22 AM