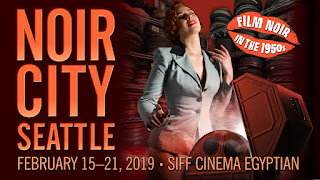 Yesterday was day two of Noir City 2019 here in Seattle.  Unfortunately I wasn't able to see the evening’s final feature, Angel Face (1953), but I managed to catch its predecessors

The Well (1951)
A 5-year-old black girl walks through a field.  She approaches a section of brush and suddenly drops out of sight.  She has fallen into a well.  It’s out of this inciting incident that director and writer Russell Rouse, along with his co-writer Clarence Greene, have fashioned a powerful and gripping tale about race relations in the US.  The young girl, it turns out, was seen talking to a white man before her disappearance.  Soon rumors begin to fly around in the small racially-mixed town where The Well is set (we don’t learn the state).  Racial tensions mount and soon start to explode.  Within hours the town is about to be torn apart by race riots. 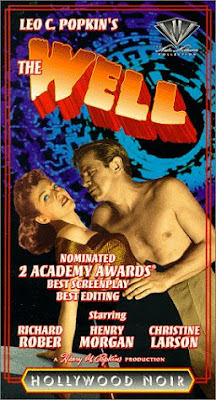 Wow, Hollywood dealing honestly and openly about race.  How did that happen?  It didn’t.  The Well is an independently produced film and its non-studio status gave it a freedom which a studio production wouldn’t have.  As an indie film some of the production values (sets, costumes, etc.) are on the low side but the ones that matter (writing, direction, acting, etc.) aren’t.  The only “name” actor in it is Richard Rober, who plays the town’s beleaguered white police chief.  (Rober also played the sleazy Italian-American in the previous night’s The File on Thelma Jordan.)  Harry Morgan, of Dragnet and MASH fame, plays the man who consorted with the black girl before her disappearance.  Back in the 1940s and 50s Morgan had a solid career in movies as a heavy.  As with Fred McMurray, TV made him anodyne and lovable.  Many of the other actors were local people in the northern California town where the film was shot.  Under good direction non-actors can perform as well as professionals.

This film is exceptionally good.  That’s it’s still relevant to us in 2019 is evident.  White gangs attack blacks.  Black gangs attack whites.  Some of the police target blacks for persecution.  Many of the blacks turn on the police and the entire system.  Demagogues whip up the crowds.  Small acts of inter-racial decency are swallowed up in the hatestorm.  Sound familiar?  In the US we call this situation “normal”, and, sadly, The Well will probably be relevant in 2051, and 2151, etc. 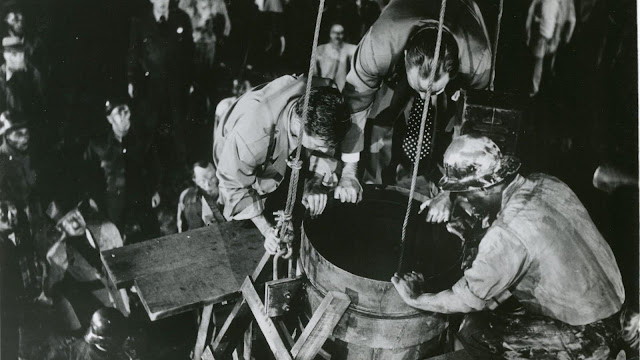 In the last third of this film the tone changes.  It becomes a “rescue the kid from the well” story.  Many of the issues raised in the first two-thirds are dropped or left unresolved (just like in reality).  As a story about a well rescue, though, it’s still exceptionally good.  Rouse and editor Chester Schaeffer grab us, pull us in, and don’t let go to the end.  Not surprisingly, this film received Oscar nominations in the categories of film editing and for the screenplay. 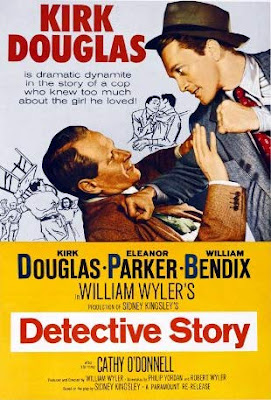 Detective Story (1951)
Detective James McLeod (Kirk Douglas) of New York City’s 21st precinct is one tough, hard-boiled, unrelenting son of a bitch.  His main target is one Dr. Schneider (George Macready), an abortionist working out of New Jersey whose patients tend to wind up at the morgue.  McLeod’s on a one-man crusade to lock him up.  But when he discovers that his own wife (Eleanor Parker) was one of the doctor’s patients his world falls apart.

Not good.  A mediocre play transformed into a mediocre movie.  It was originally written for the stage by Sidney Kingsley and like most poorly written plays it’s full of colorful side characters and lots of sub-plots and exciting incidents that don’t happen in real life.  Director William Wyler, though, was fascinated by the lead character and chose to adapt it.  Festival host Eddie Muller pointed out that the 1950s was a time full of authority figures, such as McLeod, whose narcissism and cruelty masqueraded as self-righteousness.  Wyler hated those types, as do most of us, and saw Detective Story as a way to criticize them.  Abortion is, of course, never referred to directly in the film and since today it’s considered, at least by most of us, as an acceptable medical procedure for a woman to choose, Detective Story’s misogynistic, shaming, and self-righteous tone on the topic has not aged well.

But if you like Kirk Douglas’s performances when he’s “over the top,” then Detective Story is for you.  He doesn’t just chew the scenery, he chews the costumes, the hair and make-up, the lighting, the camera.  It wouldn’t surprise me if he even broke into the editing room and gnawed on the Moviola for awhile.  On the other hand, Lee Grant plays one of the “colorful” minor characters in this film - she’s a shoplifter - and is a delight to watch.  This was her first film and she pulled it off with charm and style. 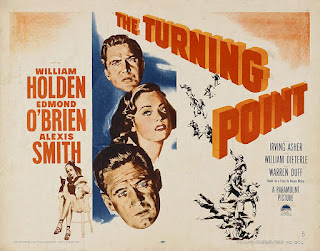 The Turning Point (1952)
John Conroy (Edmund O’Brien) is a special prosecutor called in to set up a commission to crack down on the crime syndicate in an unnamed mid-western city.  Helping him in this task is Alexis Smith (Amanda Waycross), his girl friend and the commision’s secretary.  Also tagging along is Jerry McKibbon (William Holden), a cynical, wise-cracking reporter who just happens to be a childhood friend of Conroy’s.  Their task is not an easy one.  The tentacles of the syndicate run deep - even into Conroy’s own family - and there is much mayhem before the good guys prevail.

This is a solid and entertaining noir directed by William Dieterle from a script by Warren Duff (who produced the noir gem Out of the Past) and based on a story by Horace McCoy.  Crime commissions were big in the 1950s.  The granddaddy of them all was the Kefauver Committee (1950-51) which turned its lights on organized crime.  The Kefauver Committee was wildly popular; its live TV broadcasts attracted tens of millions of viewers.  Eddie Muller even showed us the one signature move that it introduced into pop culture - hand over mic, and then lean over to whisper to your lawyer.  When that actually happens in The Turning Point the audience burst into laughter.

I liked this film.  The cast, which also includes Ed Begley as the head of the syndicate, were all very good, and its depiction of urban crime and corruption will thrill the heart of any noirista.  However, I did have one problem with The Turning Point.  Edith Head did the costumes for it and I don’t think I’ve ever seen such a wonderfully dressed cast.  Those suits!  Those skirts!  It was very distracting.  This city may be overrun with corruption, murder, and extortion but its tailors are knocking it out of the ballpark every day.  This is one of those movies where the characters can just stand there and they emit beauty and cool like the sun emits light.
Posted by Andy Nicastro at 11:54 AM