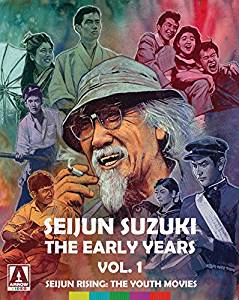 Before directing such ground-breaking classics as Tokyo Drifter (1966) and Branded to Kill (1967), Seijun Suzuki churned out B movies for the Japanese film studio Nikkatsu.  The good people at Arrow Video have brought together 10 of them spread out over two five-film double-CD/Blu-Ray sets.  Many of these titles, by the way, are not even available on DVD or Blu-Ray in Japan.

The first set contains Suzuki's films from the late 1950s and early 1960s which catered to Japanese youth.  Just as in the US and UK, the first post-WWII generation in Japan was emerging as its own market for the film industry.  Japanese kids, like their US, UK, and French counterparts, had grown up in unrivaled peace and prosperity.  Accordingly they were angry, discontented, narcissistic, and hyper-sensitive; in other words, total romantics - a generation of young Werthers full, it seemed, of sorrows.  They were also avid film-goers.  After the release and success of The Wild One (1953) in the US, film studios around the world began to realize that the big screen was where youth wished to see their sturm-und-drang concerns dealt with. 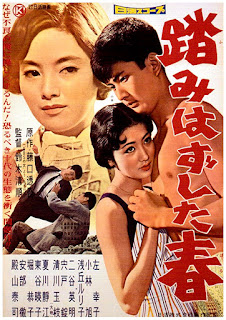 The Boy Who Came Back (1958)
Nobuo is a troubled kid.  Released from juvie at the start of the film, he can’t seem to fit into society.  Surly, rebellious, violent, he’s trying to go straight but it’s hard, so hard.  No one will give him a job.  Dad is long gone and Mom is mean to him.  No one understands him.  However, ready to greet him and help him start a new crime-free life is perky little Keiko from the Big Brothers and Sisters organization.  BBS is a group of volunteers working with troubled youth to help integrate them back into society.  She is a do-gooder.  She soon learns of Nobuo’s true love and the woman for whom he went to juvie.  Her name is Kazue.  She’s a school teacher.  Keiko realizes that only Nobuo’s love for Kazue will save him from his crooked past and she seeks to bring the two together.  But Nobuo’s old gang buddies are watching and they have other plans.

Mediocre.  The best feature of this movie, in fact its saving grace, is Sachiko Hidari’s performance as Keiko, the BBS case officer.  She’s energetic and passionate, a little spark plug of rehabilitating zeal, committed to rescuing Nobuo, whatever that means, regardless of the abuse he subjects her to.  The film observes all the proprieties of 1958 Japan and yet there’s a serious streak of kink in Hidari’s performance that is hard to miss.  She’s seems to be something of a masochist.  Does she love Nobuo?  Perhaps.  But she loves saving him even more.  Her family turns on her, her employer is ready to dismiss her, and even BBS decides to kick her out.  Yet far from dissuading her, all this seems to turn her on.

At the end of the film - here comes a spoiler - Keiko watches as Nobuo and Kazue walk happily arm-in-arm down the street into their bright new future.  They can’t see her but she can see them.  She has saved Nobuo - and lost him.  As they recede, she is overcome with emotion.  She bends down to tie her shoe and to hide her tears.  But soon she raises her head with a big smile on her face.  She has succeeded.  And while the music swells to its climax she stands up and walks joyously down the street, her face beaming with a smile of almost post-orgasmic happiness.  From most directors you could dismiss all of this but with Suzuki you can't; wild and freaky are never far from the surface.  This is a man, after all, who in a few years will make a film about a killer who gets turned on by the smell of boiling rice...

The remaining performances in the film are unremarkable.  Akira Kobayashi’s Nobuo is little more than a James Dean rip-off and Ruriko Asaoki’s Kazue is as bland and forgettable as idealized females usually are.  There is, however, one other bright spot in this film's casting.  Jo Shishido plays Nobuo’s criminal (and criminally overdressed) nemesis, Kajita.  It's a small role, true, but Shishido captivates every time he's on camera. Sadly, this is the only movie in the set with Shishido. 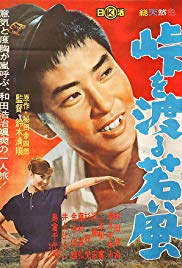 The Wind-of-Youth Group Crosses the Mountain Passes (1961)
College student Shintaro (Kôji Wada) spends his summer touring the provinces as an itinerant salesman of women’s underwear.  Along the way he meets up with other roving peddlers as well as a down-and-out traveling magic troupe.  Soon romance buds between him and the troupe leader’s daughter, Misako (Mayumi Shimizu).  This being a Seijun Suzuki movie, though, there are also yakuza and shady gangland figures there in the Japanese hinterland (sure, why not) and they help to provide sub-plots for the film.

This light and entertaining film (with probably the most cumbersome title in film history) is solidly made B fare.  In one respect, though, it’s worth a second viewing - specifically, for its cinematography.  Wind-of-Youth, like most Nikkatsu movies at the time, was filmed in widescreen and this format enabled Suzuki to display his total mastery of composition.  Handling an Altman-esque number of characters and multiple storylines, he and Director of Photography Saburô Isayama manage to fill the screen and yet keep everything crystal clear for the viewer.  Quietly and unobtrusively they sub-frame multiple levels of action within a shot, as in the one below.  Mayumi and a member of the troupe are center right.  She is trying to teach him a simple magic trick in which a candle is transformed into a bunch of flowers.  He fails and fails and fails.  Then she does it effortlessly.  At the same time domestic life plays out in the background - Dad's getting a massage, Mom is sewing.  And the whole scene is framed, and given a level of intimacy, by the presence of the sliding doors.

Kôji Wada puts in a winning performance in the lead.  With his big smile and casual attitude, he's perfectly in tune with the film's tongue-in-cheek vibe.  Wind of Youth is a carnival of a movie and Wada goes through it almost acknowledging that it's all a big, fun, colorful joke.  And for him, at one point, it literally is.  Shintaro's youthful insouciance has created enemies and during a fight with one of them containers of colored paint are thrown on him.  But rather than throw actually paint on the actor, Suzuki merely has the camera cycle through color filters while the actor, dressed in a white shirt, has water thrown on him.  It's funny, whimsical, and ingenious - as if the film itself were doing a back flip.

Wind of Youth is also a celebration of the young, no more so than in its depiction of the fate of the magic troupe (spoilers ahead).  Misako's father is a good magician but his show is stale and boring.  He can barely keep an audience.  And when his second daughter, the show's stripper, leaves, his dwindling audience abandons him.  And so do his financial backers.  Facing ruin, he tries to add a new act to the show, one in which he is tied up in chains and submerged in water.  It’s a Harry Houdini escape act - but about fifty years after Houdini made it interesting.  On a run through, though, everything goes wrong and he drowns.  Misako takes over as troupe leader after her father's death.  She, though, is not trapped in the past at all.  She knows what to do. She transforms the troupe into a magic and variety show complete with sexy girls in bikinis (the stripper daughter has returned) and rocking jazz combos.  The show is a huge success.  The film's message is clear: The young know best; the old don't have a clue. 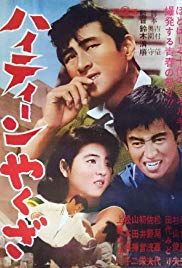 Teenage Yakuza (1962)
Jiro (Tamio Kawachi) and Yoshio (Toshio Sugiyama) are the best of friends.  Living in a village between Tokyo and Yokohama they bike together to school and are concerned mostly with getting into a good university or saving enough money to buy a state-of-the-art stereo system.  The post-war Japanese economic miracle is transforming their small village into a city.  Construction is everywhere.  New shops are opening every day.  Hope is in the air.  The town is exploding with growth - and with yakuza gangs, who soon set up shop to shakedown all the merchants.  When Jiro and Yoshio tussle with them, the latter gets a stab in the leg which leaves him lame.  Sinking into depression and self-pity Yoshio joins up with the yakuza gangs.  However, the idealistic Jiro, angry at the extortion rings now crippling the town, decides to fight the yakuza.  But it turns out to be more difficult than he thought

Never mind the seemingly grim, social-message tone of the story, Teenage Yakuza is just good, goofy B movie fun.  Seventy-one minutes.  Briskly paced.  Hammy performances from actors you’ll never see again.  Unintentional funny (and intentionally so at times, too).  No matter how bad the A movie was, this one gave you your yens' worth of entertainment.  It’s the kind of movie where a girl in a noodle restaurant will pick up a ukulele, start singing a pop song, and teenagers suddenly flood the room and do the twist.

Despite the unpromising material Suzuki manages to stamp this film with his own unique style, mostly through the impressive cinematography of DP Kenji Hajiwara. Some of the shots are breathtaking in their beauty and meticulous composition (see below).  Suzuki also makes the town itself a character.  Construction trucks are constantly barreling down the small streets (and running over minor characters).  Dust and construction platforms are everywhere.  The yakuza gangs brawl in the streets.  The town feels raw and unfinished.  It feels, in fact, like the new and lawless towns one would normally find in a western, which, in a sense, it is (one of the yakuza wears a cowboy hat and even lassos Yoshio early in the film).  One of Suzuki’s great strengths was his ability to combine aspects of film genres to create something memorable, no matter how minor the film might seem.

Posted by Andy Nicastro at 5:38 AM