Gertrude Himmelfarb: Past and Present 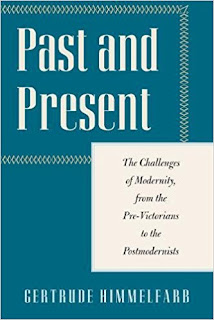 Finished Past and Present: The Challenges of Modernity, from the Pre-Victorians to the Postmodernists by historian and neoconservative Gertrude Himmelfarb.  It’s an essay collection, and the pieces are hit and miss; some good, some bad, most in between.  I could try to provide a broad overview but that’s an exhausting prospect; so instead I think I’ll take them one by one.

“Leo Strauss: Ancients and Moderns” - The problem with being a politically committed writer such as Himmelfarb is that you wind up aligning with thinkers who often aren’t very good.  But because they’re on your side (or at least you think they are) you stick by them for the sake of the movement, or the cause, or the revolution, or the counter-revolution, etc.  It’s sort of like being the manager of a sports team; certain people are on the roster whether you like it or not and you’ve got to play them.  Well if you’re a neocon the number one piece of deadwood on your team is Leo Strauss.  Richard Rorty once commented that it’s a great day in a person’s intellectual development when they realize that Thus Spoke Zarathustra is total crap.  The same principle applies to Strauss.  It is a good day when one moves beyond him.  Yes, he was an outstanding scholar and Himmelfarb rightly celebrates the pure intellectual joy of reading him explicate a text.  But Strauss’s belief, derived from Plato, that philosophy unearths eternal human truths (truths which, it should be noted, Strauss and his neocon acolytes have never illuminated for us) is complete nonsense.  It won’t survive five minutes of critical thought.  One’s first encounter with Plato can be an exhilarating and head-turning experience.  That old Greek was the wiliest of intellectual seducers.  And when he first glances your way and bats his eyes at you (“How do you like my Realm of the Forms?” he coos), you may go a little gaga.  But you'll get over it.  Leo, though, never did.  He went completely gaga, and never broke free from the Platonic belief (or, more accurately, delusion) that only philosophers can disclose The Truth to us.  He believed in Plato, and to do so after two and a half millennia requires a special kind of stupid.

“William James: Once-Born and Twice-Born” -  A good piece.  Many of these chapters first appeared as articles in The Weekly Standard.  They deal with current events but Himmelfarb brings a welcome sense of historical perspective to the issue.  In general, she acquits herself well.  In this instance she contrasts the “militancy” of the so-called New Atheists (Hitchens, Dawkins, Harris, etc.) with the nuanced and insightful stance toward religion put forward by William James.  If you’re a newly-minted conservative and would like to deepen your understanding of conservative principles and intellectual history in general, you will find this book very informative.

“Burke’s War on Terror, and Ours” - This one is just sad.  Burke has nothing of significance to say about the terrorism of ISIS.  French Jacobins and Islamic fundamentalist are very different creatures and their uses of terror are too dissimilar to enable a fruitful comparison.  In this case Himmelfarb is like the old mill horse who, when set free, just goes into the field and walks in a circle.  Prior to the rise of Islamic terrorists, the Communists were the big threat to the West. Among the simple-minded, and especially simple-minded right-wingers, the Commies of the 20th-century were easily conflated with the French revolutionaries of the 18th-century.  To criticize one was to criticize the other, and thus one was freed from the onerous task of having to do any work to understand either.  Reading Burke (or, more likely, reading of Burke) would help you understand the Soviet menace.  Now that the Communists are gone and Islamic terrorists are the threat, her instinct is to deploy Burke against them (“Release the Burken!” she cries).  This will not do.

“Bagehot’s Constitution - and Ours” - This one is also good.  She’ll have more to say about Bagehot below.

“Churchill’s Welfare State - and Ours” - A fascinating article about Winston Churchill’s brief time in the Liberal Party and his support of welfare-state legislation.  Opposing the legislation were Sidney and Beatrice Webb, founders of the Fabian Society.  Himmelfarb does not like the Webbs.  They irk her.  I can’t help but feel that a large part of that is simply one mandarin’s envy of another.  The Fabians, after all, were successful mandarins; they became part of the Labour party.  Neocons, on the other hand, saw their grand project bleed out in the desserts of Iraq; until it finally got stomped in the 2016 Republican primary.  But, nonetheless, one of the best essays in the collection.

“The Jewish Question - Then and Now” - Horrible.  An embarrassment, really.  In the wake of the attack on the Charlie Hebdo offices in Paris, Himmelfarb sets out to examine the history of French anti-semitism.  She starts with that of the philosophes (Voltaire, Diderot, etc.) but then inexplicably moves over to Germany to discuss the anti-semitism of Bruno Bauer and Karl Marx.  Never mentioned in this survey of French anti-semitism: the Dreyfus Affair.  Then the piece ends as a paean to American exceptionalism.  A mess, a total mess.

“Disraeli: Der Alte Jude” - This is good, too. But it does contain a factual error.  In this 2016 article, she claims that since Disraeli’s death in 1881 there hasn’t been a Jewish Prime Minister in Britain; David Cameron, PM from 2010 to 2016, was also Jewish.

“Cardinal Newman: Education and Christianity” - Brief and informative.  Wish it was longer.

“Einstein: The Scientist as Pacifist” - Good overview of the physicist’s life.

“American Democracy and Its European Critics” - The best piece in the book.  Originally written in 1952, it surveys the generally hostile attitude towards the United States by various European writers.  Himmelfarb observes that the real target of the hostility is democracy.  In European countries

democracies are only on the surface.  In France and England democracy came as an afterthought, as a political veneer covering the social and cultural accretions of many generations of aristocracy.

American culture, she concedes, is popular culture; and when its artifacts - Coca-Cola, movies, Raymond Chandler novels, etc. - enter European culture it’s their popularity among the common people of Europe which upsets the gate-keepers of the continent.  And when the gate-keepers come to the US, their mental unhinging can be even more dramatic.  Of Charles Dickens, who visited the US twice and didn’t like it, she writes that he “was full of love for the common people until he came to meet them as rulers in their native habitat.”  Nice.

“Democratic Remedies for Democratic Disorders” - The worst piece in the book - hysterical, fearful, overwrought, mentally unhinged.  The year was 1998 and Himmelfarb sees the country falling apart at the seams.  Her evidence: crime rates, illiteracy, violence, drug addiction, welfare dependency, etc.  Sexual laxity seems to especially drive her into an apocalyptic froth.  To truly savor the late-90s right-wing dementedness of this article you should read it while listening to the “O Fortuna” section of Carl Orff’s Carmina Burana (which was undergoing something of a popular revival at the time).  The remedy?  A national revival of fundamentalist Christianity.  Pathetic.  This was a ludicrous idea in the late 90s; twenty years later it’s even more delusional.  If there’s one group in our society who’ve demonstrated a willingness to sacrifice their morals, ethics, and public virtue just to be near raw power it’s evangelical Christians.

“Our Fourth of July and the Queen’s Diamond Jubilee” - Very insightful.  Himmelfarb returns to Walter Bagehot in this piece and expounds upon his distinction between the “dignified” and the “efficient” parts of the British constitution.  In Bagehot’s view the Queen represents the former and the House of Commons the latter.  The “dignified” is the ideal which all citizens can support, it stands above politics; the “efficient” is the part that gets things done and is inherently political.  Himmelfarb notes that in the US it’s the Constitution which fulfills the function of the “dignified,” uniting people who are otherwise antagonistic when it comes to the “efficient” part of our government.

“Victorian Values, Jewish Values” - Interesting and informative.  Who reappears in this article but Beatrice Webb.  This time, though, in a positive light.  Back in 1889 Webb contributed a chapter about the Jewish community in London’s East End to Charles Booth’s Life and Labour of the People of London.  Although not Jewish herself, Webb found much to admire in their society.  And Himmelfarb finds much to admire in Webb’s survey.

“For the Love of Country: Civil Society and the State” - Not good.  More 1990s hand-wringing.

“From Postmodernism to Transgenderism” - She likes neither.

Posted by Andy Nicastro at 7:17 AM