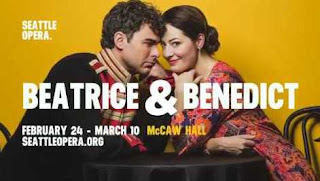 I went to see the Seattle Opera’s production of Hector Berlioz’s Beatrice and Benedict on Sunday afternoon.  How was it?  A few words immediately come to mind: garbage, rubbish, merde, etc.  Berlioz’s 1862 opera is based on Shakespeare’s Much Ado About Nothing and in this production the Seattle Opera has decided (for some unknown reason) to put the two works together.  It’s a mash-up - we get a scene out of Shakespeare, then some music and singing from Berlioz’s work, then a little more Shakespeare, then back to Berlioz again, and so on.  We don’t really get Berlioz’s opera and we don’t really get Shakespeare’s play.  Instead they’re pieced together, like Frankenstein’s monster or Chucky.

Berlioz’s opera is in French, but to make it fit the Shakespeare portions it’s now sung in English.  I don’t mind changing a foreign-language opera to English for educational purposes (i.e. The Magic Flute for kids), but I do object to it being done merely to suit the half-baked ideas of opera directors.

But the meddling doesn't stop there.  Berlioz’s altered Shakespeare's story for his own needs and the two works don’t quite match up.  There are some gaps.  To fill them in, conductor Ludovic Morlot simply pilfered music - an aria here, a chorus there - from the composer’s earlier operas.  So the big loser in all this is Hector Berlioz - it’s not the opera he wrote, it’s not even in the language he wrote it in.  I suppose we should just be grateful that the Seattle Opera at least kept the orchestra and didn’t replace them with two guys on banjos accompanied by washboard and jug.

This staging is a joint production between the Seattle Opera and ACT Theatre, whose John Langs - along with Merlot - are the parties responsible for this abomination. The only entertaining part of the afternoon were the opera's program notes and their pathetic attempts to justify this monstrosity.  Aidan Lang, the General Director of the Seattle Opera, writes that Morlot, ACT, and SO have crafted “a new version of Berlioz’s work that captures the true spirit of Shakespeare.”  Really?  The "true spirit?"  As if Shakespeare was looking over Much Ado and bemoaning, “Oh, if only there were selections of mid 19th-century French opera in this; only then would the play’s true spirit shine forth.”  Elsewhere in the program notes, Jessica Murphy Moo writes "Morlot admits it took him a little time to come around to the idea of adapting Beatrice and Benedict."  I would advise that in the future Morlot pay greater heed to his instinctive misgivings.  They are very sound.  Later in the same article Moo states “Seattle Opera has never presented Berlioz before.”  Well, Jessica, they haven’t presented him now, either.

Sadly, this thing will run at McCaw Hall through March 10th.

Posted by Andy Nicastro at 5:32 AM