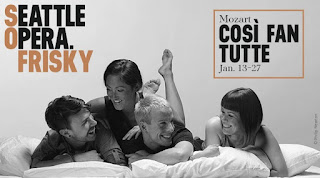 Saw Mozart’s Così Fan Tutte at the Seattle Opera on Sunday.  The singing was wonderful, the production so-so, the opera itself not so good.

Here’s the story.  Two young men, Ferrando and Guglielmo, are convinced of the virtuousness of their fiancées, respectively, the sisters Dorabella and Fiordiligi, but the cynical Don Alfonso laughs at their naiveté and wagers that he can prove that the women are fickle and faithless.  The only condition to the wager is that the young men must do anything he tells them.  They agree.  Soon the lads are called off to their army unit (it’s just a ruse of Don Alfonso’s) and bid farewell to their sweethearts.  Once they're gone, two friends of Don Alfonso’s show up from Albania.  They are, of course, Ferrando and Guglielmo in disguise, and soon they are laying siege to each other’s beloved.  Over the course of the opera they both score.  The sisters can’t resist their manly charms.  And, besides, as the victorious Don Alfonso sings in the finale “Così fan tutte!”, which in Italian means literally “Thus do all” although it’s normally translated as “Women are like that.”  In view of the misogyny and rampant male sexual anxiety which runs through this opera I think the translation “Bitches be hos” would also fit.

Mozart wrote this opera in a rush and it shows.  Much of the music is second-rate and the characters are poorly developed.  It’s hard to tell the lovers apart.  At one point even Mozart himself seems to lose interest in the score and starts to steal from his earlier works.  This opera is also very long.  Subtract the  twenty-five minute intermission from this production and the evening takes up about three hours of your life.

What is an opera company to do with such a piece?  Easy.  Modernize it.  Ever since Peter Sellars’s 1986 production of Così, which was set in a diner, directors have availed themselves of this approach to deal with the fact that this opera is simply not that good on stage.

And thus it is with this production, which takes the added step of moving the action to the Pacific Northwest.  The women live in Seattle, people take lots of selfies and drink Starbucks, there are references to Uncle Ike’s pot shop.  And instead of becoming Albanians the two young men are transformed into 90s-era grunge dudes from Portland.  Ugh...  But OK, I understand the limitations of this piece.  But then the production descends into that embarrassing amateurishness which so often characterizes the Seattle Opera.  No sooner are the Portland dudes onstage than they start thrusting their crotches at the women.  This action (out of character but good for cheap and reliable laughs) continues for much, if not all, of the first act.  One of them even pretends to masturbate using a pillow.  Why?  Are these artists so unsure of their talent, so petrified of losing the audience's attention that they're willing to indulge in the kind of stage antics that would barely pass muster in a High School production?  They should concentrate on serving the work, not on catering to taste of the most bored and imbecilic spectator in the hall.

But enough of that.  You go to an opera to hear good singing and this production has plenty of that.  (Please keep in mind that there are two different sets of lead singers in this production; I'm reviewing only one of them.)  Ben Bliss and Michael Adams were fine as Ferrando and Guglielmo.  Kevin Burdette, looking very dapper in a suit, brought an urbane nonchalance to the role of Don Alfonso; if someone ever writes an opera about Cole Porter or Cary Grant he's the man to cast in the lead for it.  Despina, the sisters' maid and the Don's accomplice, was sung beautifully by Laura Tatulescu.  But the show belonged to the two lead females.  As, respectively, Dorabella and Fiordiligi, Hanna Hipp and Marjukka Tepponen have voices which are solid and commanding, majestic yet warm.  Tepponen, in particular, has a voice made for opera seria.  I would love to hear her sing Handel.  At one point during her performance of Act II's Per pietà ben mio, perdona (which was the highlight of the show, by the way) she dropped down to a pianissimo so swift, soft, and beautiful that I got goose bumps.  You could hear gasps in the audience at the perfection of it.  It made everything else worth it.

Posted by Andy Nicastro at 6:05 AM