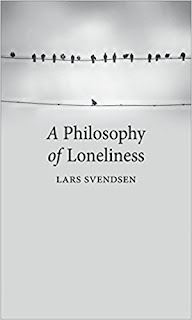 Finished A Philosophy of Loneliness by Lars Svendsen yesterday.  It was pretty bad.  To begin with, there’s not really a philosophy in it at all.  Svendsen tells us what philosophers and writers have said about loneliness but never puts forward a philosophy of his own.  Nor does he delve into any one thinker on this topic to a satisfying length.

On the plus side, Svendsen reviews the empirical studies about loneliness and concludes that, for the most part, they aren’t reliable or consistent.  Is loneliness increasing or decreasing?  One study say yes.  A different one says no.  You can select the study to prove what you want.  The media, predictably, usually latches onto the more depressing studies.

But I have a bigger objection to this book.

I try very hard to avoid thinking in stereotypes, but Svendsen isn’t making it easy for me.  When I read that he was Professor of Philosophy at the University of Bergen in Norway it was hard not to picture some dour, bearded, sweater-wearing fellow trudging at twilight through the snow-dappled fjords to his solitary cabin, silently eating his lutefisk and warm beer dinner, then settling in for the night to scribble away at his shitty little book on loneliness.

Now, according to Lars the empirical studies show that people in Nordic countries are less lonely than people in Spain or Greece or Italy.  Perhaps.  But if this book is any indicator they are as chock full of Nordic gloom and douchebaggery as ever.

When Svendsen ventures to put forward an opinion of his own it is overwhelmingly dreary, mean, and judgmental.  He is particularly fond of blaming people who feel lonely (in other words, the people most likely to buy his book*).  His attitude goes something like this:  You should learn to appreciate your solitude.  But solitude is bad.  If you're lonely you must be doing something wrong.  It’s probably your fault.

He hammers away at this theme relentlessly and by the end of this book Svendsen’s descended into little better than Scandinavian self-parody.  Here he is a mere three pages before the book’s blessed end:

The fact that you are lonely does not necessarily mean that others have failed you or that they have fallen short.  It can be that it is you who have fallen short in your evaluation of the attachment you actually have to them.  Your loneliness, furthermore, does not mean you can expect others to remedy that loneliness.  No one has a right to a life without loneliness, just as no one has a right to be happy.

On the next page Mr. Cheerful tells us: “Death is lonely.”  He then follows that up with - and I shit you not - quotes from “The Death Song” by Jens Bjorneboe:

Now the day has arrived and the hour has arrived.
And you are placed against the wall to bleed.
And the ones who hold you dear
Soon fade away from you.
That's when you will see: it is lonesome to die.

At this point even the loneliest reader should be doubled up with laughter at what a cultural cliche our author has turned out to be.

In one of the few non-dreary parts of this book, if not the only one, Lars writes:  “It is difficult to avoid describing Rousseau as an arsehole…”

*  I didn't buy this book.  I got if from the library so that I could write a blog post - which, now that I think about it, is probably the loneliest and saddest thing in the world...

Posted by Andy Nicastro at 7:00 AM